Antimony V chloride, also known as Antimony Penta chloride, is a colourless chemical compound. However, due to contaminants, its characteristic samples are yellowish. It has a proclivity for hydrolyzing into hydrochloric acid. Furthermore, it is highly corrosive and causes non-fluorinated plastics to carbonise.

Antimony V chloride is also a versatile reagent that can be used as a Lewis acid catalyst in a variety of chemical processes, including isomerization and rearrangements, electrophilic aromatic substitution, the formation of carbocation and onium ion complexes, halogenation, and so on. They are liquid solutions that are moderate to highly concentrated.

Antimony (V) chloride is a compound formed by the proportional bonding of antimony and chlorine in a fixed ratio of 1:5. Antimony (V)chloride is also known as antimony pentachloride or antimony perchloride. It is colourless in nature but due to the impurities mixed in it appears to be reddish yellow or dark brown in colour. It is found in an oil-like state and is highly corrosive in nature.

The molecular formula of antimony(V) chloride is the symbolic representation of the compound which is written as, SbCl5

The structural formula of the antimony(V)chloride shows the position of chlorine and antimony along with their bonds to demonstrate the physical existence of the compound. 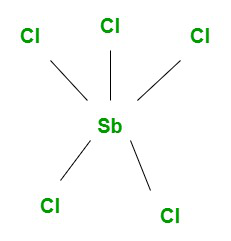 Hydrochloric acid and antimony oxychlorides are produced when antimony pentachloride is hydrolyzed. This reaction is suppressed in the presence of an excess of chlorine due to the creation of the hexachloridoantimonate complex ion:

Question 1. What are the harmful effects of Antimony(V)chloride on the human body?

The harmful effects of Antimony(V)chloride on the human body are enlisted below:

Question 2. What is the refractive index of Antimony(V)chloride?

Question 3. Where can we see the most potential use of Antimony(V)chloride?

We can see the use of Antimony(V)chloride in dyeing, coloring metals, and as a catalyst in organic chemical reactions.

Question 4. What type of bond is found in Antimony(V)chloride?

The antimony(V)chloride is a compound with five chorines and a single antimony atom. The chlorine atoms of the compound share a covalent bond with antimony(Sb).

Question 5. What is the preparation process of Antimony(V)chloride?

Question 6. How is the compound Antimony(V)chloride is stored?

Antimony (V) chloride is highly corrosive in nature it is stored away from heat and moisture as in the presence of moisture it releases harmful hydrogen chloride gas.