It is a by-product of sodium carbonate and also has both diuretic and expectorant effects. it appears as a crystalline salt, Ammonium Chloride is white In its pure form. This compound is mildly acidic and highly water-soluble. In veterinary medicine, Ammonium chloride is used in the prevention of urinary stones in sheep, goats, and cattle.

When a 5% solution of ammonium chloride is mixed with water then the resulting solution pH value will be ranging from 4.6 to 6.0. It is an acidifying salt that may be found in the body and in the urine. This acid-forming salt also has an expectorant action making it useful for cough relief by irritating the mucous membranes, 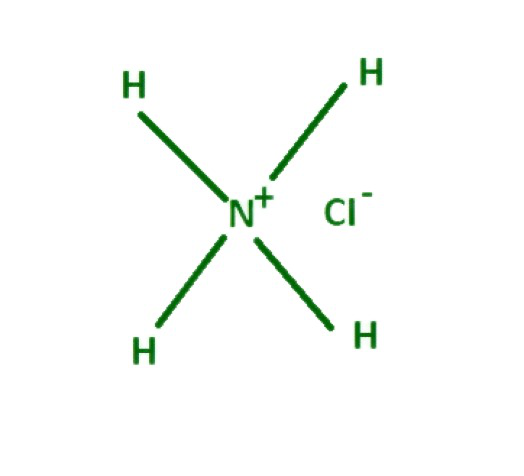 Ammonium chloride is prepared by reaction of ammonia (NH3) with hydrogen chloride.

This is also formed as the by-product of the Solvay process. In this process carbon dioxide and ammonia are passed into a cold saturated solution of sodium chloride.

Question 1: What is the chemical formula of Ammonium chloride?

Ammonium Chloride is an inorganic compound with the chemical formula of NH4Cl .

Question 2: What are the effects of Ammonium chloride on health?

It is not full risk free as its high dose can lead to higher blood pressure s well as can cause irritation , nausea and headache . It can also cause serious eye discomfort.

Question 3: Where is ammonium chloride found?

It is found in household products like shampoo, hair colour and bleach, body wash, facial cleanser, conditioner, hand wash, dishwash detergent as well as oil and salt. It is important for electrolytes .

Question 4: How ammonium chloride will be prepared?

Ammonium chloride is prepared by reaction of ammonia (NH3) with hydrogen chloride.

This is also formed as the by product of solvay process .In this process carbon dioxide and ammonia are passed into a cold saturated solution of sodium chloride.

Question 5: What will happen when ammonium chloride is heated?

When ammonium chloride is heated, It undergoes a decomposition reaction to yield ammonia and gaseous hydrogen chloride as the products. This process is also appear similar to sublimation processes, the change is chemical and not physical.

Question 6: What is the effect of ammonium chloride and bleach mixture?

When we will mix ammonium chloride and bleach it will release chloramine gas and Chloramine gas is toxic in nature then the exposure of chloramine gas causes irritation of eyes, nose, throat and lungs.

Question 7: What is the basic use of ammonia in agriculture?

One of the main use of ammonia is its use in the agricultural industry as a fertilizer. Ammonia is waterless in nature (or sometimes by aqueous solutions or by ionic salts).

It is mixed with agricultural soils to increase nitrogen content in the soil and, also helpful in soil fertility which leads to higher crop yields and also of better crop quality. This compound is used for many important chemicals such as hydrazine and hydrogen cyanide.