What is a nine-point circle?

The approach for geometry can be observed from ancient times in their constructions from the use of various shapes in a very specific way. The term is originally derived from Greek words ‘geo’ and ‘materia’ which means earth and measurement respectively. Let’s start by understanding the definition of geometry,

Geometry is a part of the development of the modern world. Modernized systems highly depend on geometry as it is used for designing, constructional works, architecture in choice of material for construction, and many more. It is also applicable in the technical background for computing various designs, manufacturing, creating blueprints, programming, etc. Geometry is a branch of mathematics that deals with the study of shapes and their properties. The given article is a study about the nine-point circle, its properties, and step by step method to construct a nine-point circle.

What is a nine-point circle?

The nine points the circle passed through from the triangle are: 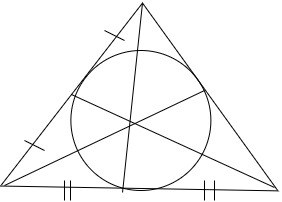 Question 1: What is the radius of the point circle?

The radius of point circle is the distance from the circles center to a point on the circle.

Question 3: Give the equation of the point circle?

Question 4: What is the radius of the nine-point circle?

The radius of nine point circle is exactly half of the circumradius of triangle which is given by N = 1/2R.

Question 5: What are the nine points the circle passed through from the triangle?

The nine points are,