What causes an Earthquake?

One of the dangerous and major natural disasters that take place is the Earthquake. Due to earthquakes every year huge damage to property and life is caused all around the world. Therefore, developing countries implement proper strategies and awareness about the disaster management of the earthquake which is a requirement of the hour. The prevention taken after the calamity helps to protect the lives from the losses and help to cope up with these hazards.

What is an Earthquake?

An earthquake is something that is caused by a sudden slip on a fault, or it is the shaking of the surface of the earth resulting from a sudden release of energy in the Earth’s lithosphere which creates seismic waves.

When the stress on edge overcomes the friction, there is an earthquake that releases energy in waves that travel through the earth’s crust and causes the shaking that is felt by us.

Earthquakes can range in size those that are weak that they cannot be felt to those violent enough to destruct objects and wreak mass destruction across cities. The seismicity of an area is the frequency of earthquakes experienced over a period of time in a particular area. The word tremor is also used for the non-earthquake seismic disturbance.

Like on March 22, 1960, Chile faced one of the largest earthquakes till so far measured around 9.5 according to the United States Geological Survey. Similarly, on March 11, 2011, Japan suffered from one of the major destruction of its economy due to the huge earthquake.

The earth’s crust is consists of a solid core, mantle (i.e. a molten magma), and various lithospheric plates. Such an earth’s structure is shown below: 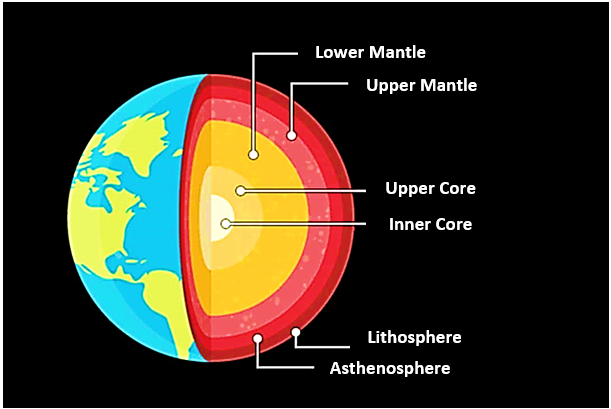 The Earth’s outer shell is made up of huge slabs called tectonic plates, which are constantly moving due to convection currents triggered by molten lava inside the earth’s crust. This constant movement leads to either the plates sliding against each other or drifting away from each other. These interactions and drifting apart from tectonic plates underneath the earth are perceived by living organisms, included humans. 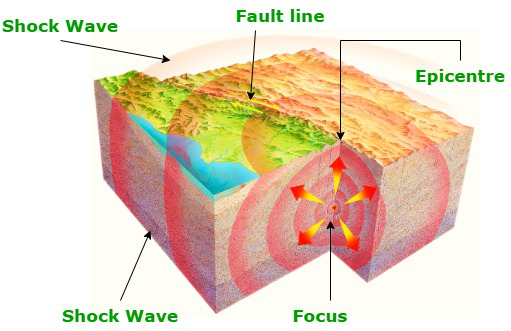 Earthquakes are caused by the sudden release of stress along faults in the earth’s crust. The continuous motion of the tectonic plates causes the steady build of pressure in the rock strata on both sides of the fault until stress is great enough, which is released in jerky and sudden movement. These resulting waves of seismic energy originate through the ground and over the surface, causing the shaking that we feel as earthquakes.

Induced quakes are caused by human activity, like the construction of tunnels, the filling of reservoirs, and when geothermal is implemented or projects which are done under the earth’s crust like the use of TNT’s.

Volcanic quakes are caused by active volcanism. They are generally not powerful as tectonic quakes but often occur relatively near to the surface. Consequently, they are usually felt in the vicinity of the hypocenter.

These earthquakes result from the explosion of chemical and nuclear devices. It can be measured by the motion of large tectonic earthquakes using a GPS device because the rocks on either side of the fault are offset during this type of earthquake.

How are Earthquakes measured?

Earthquakes are measured by the amount of force or energy they produced. This is done through the Richter scale. Richter’s scale provides the quantitative proportion of a tremor’s size, found in 1935 by American seismologists Charles F. Richter and Beno Gutenberg. The quake’s greatness is resolved to utilize the logarithm of the tallness of the biggest seismic wave aligned to a scale by a seismograph.

The Richter scale was initially made to gauge the extent of seismic tremors of moderate size that is 3 to 7. By giving a number that would permit the size of one quake to be contrasted and another. Present-day seismographs might be adjusted to register Richter sizes, and current strategies for estimating tremor size have been created to deliver results that continue as before with those deliberate utilizing the Richter scale.

On the first Richter scale, the littlest quakes quantifiable at that the worth was near zero on the seismograph of the time frame. Since current seismographs can identify seismic waves much more modest than those initially picked for zero sizes, it is conceivable to quantify quakes having negative extents on the Richter scale. Each expansion of one unit on scale addresses a 10-overlap increment in the greatness of a tremor. As such, numbers on the Richter scale are relative to the normal logarithms of most extreme wave amplitudes. Each expansion of one unit additionally addresses the arrival of around multiple times more energy than that addressed by the past entire number on the scale. That is, a seismic tremor estimating 5.0 deliveries multiple times more energy than a quake estimating 4.0. In principle, the Richter scale has no maximum breaking point, no quake has at any point been enlisted on the scale above greatness 8.6. That was the Richter greatness for the Chile quake of 1960. The second greatness for this occasion was estimated at 9.5.

Important things to remember during an earthquake: