Statistical Functions in Excel With Examples

To begin with, statistical function in Excel let’s first understand what is statistics and why we need it? So, statistics is a branch of sciences that can give a property to a sample. It deals with collecting, organizing, analyzing, and presenting the data. One of the great mathematicians Karl Pearson, also the father of modern statistics quoted that, “statistics is the grammar of science”.

We used statistics in every industry, including business, marketing, governance, engineering, health, etc. So in short statistics a quantitative tool to understand the world in a better way.  For example, the government studies the demography of his/her country before making any policy and the demography can only study with the help of statistics. We can take another example for making a movie or any campaign it is very important to understand your audience and there too we used statistics as our tool.

In Excel, we have a range of statical functions, we can perform basic mead, median mode to more complex statistical distribution, and probability test. In order to understand statistical Functions we will divide them into two sets:

So, let’s take random data of a book store that sells textbooks for classes 11th and 12th.

Thus, there are 7 textbooks that have a discount out of 9 books.

This function will count everything, it will count the number of the cell containing any kind of information, including numbers, error values, empty text.

So, there are a total of 9 subjects that being sold in the store

COUNTBLANK function, as the term, suggest it will only count blank or empty cells.

There are 2 subjects that don’t have any discount.

COUNTIFS function is the most used function in Excel. The function will work on one or more than one condition in a given range and counts the cell that meets the condition.

The AVERAGE function is one of the most used intermediate functions. The function will return the arithmetic mean or an average of the cell in a given range.

The function will return the arithmetic mean or an average of the cell in a given range that meets the given criteria.

The MEDIAN function will return the central value of the data. Its syntax is similar to the AVERAGE function. 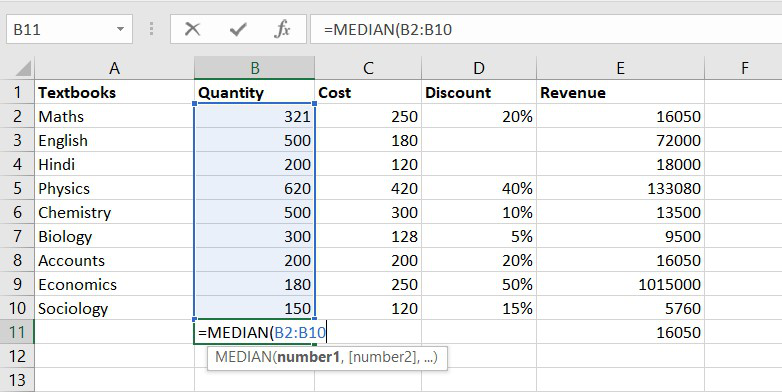 Thus, the median quantity sold is 300.

The MODE function will return the most frequent value of the cell in a given range.

Thus, the most frequent or repetitive cost is  Rs. 250.

This function helps us to determine how much observed value deviated or varied from the average. This function is one of the useful functions in Excel.

To understand the VARIANCE function, we first need to know what is variance? Basically, Variance will determine the degree of variation in your data set.  The more data is spread it means the more is variance. 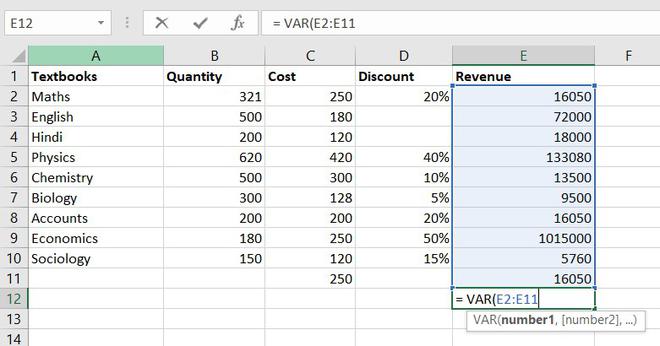 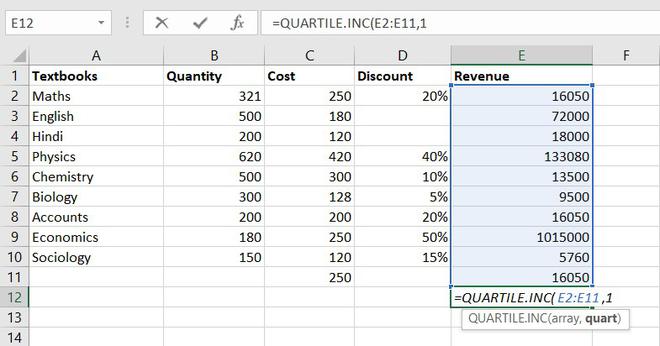 CORRELATION function, help to find the relationship between the two variables, this function mostly used by the analyst to study the data. The range of the CORRELATION coefficient lies between -1 to +1.

So, the correlation coefficient between discount and revenue of store = 0.802428894. Since it is a positive number, thus we can conclude discount is positively related to revenue.

The MAX function will return the largest numeric value within a given set of data or an array.

The maximum quantity of textbooks is Physics,620 in numbers.

The MIN function will return the smallest numeric value within a given set of data or an array.

The LARGE function is similar to the MAX function but the only difference is it returns the nth largest value within a given set of data or an array.

Let’s find the most expensive textbook using a large function, where k = 1

The most expensive textbook is Rs. 420.

The SMALL function is similar to the MIN function, but the only difference is it return nth smallest value within a given set of data or an array.

Similarly, using the SMALL function we can find the second least expensive book.

So these are some statistical functions of Excel. We have learned some of the most simple functions like COUNT functions to complex ones like the CORRELATION function. So far we learn, we understand how much these functions are useful for analyzing any data. You can explore more functions and learn more things of your own.