Spring Boot is a microservice-based framework and making a production-ready application in it takes very little time. Spring Boot is built on the top of the spring and contains all the features of spring. And is becoming a favorite of developers these days because it’s a rapid production-ready environment that enables the developers to directly focus on the logic instead of struggling with the configuration and setup.

To use the appropriate tomcat version and java version, it will be helpful to prior visit the HTML file.

This is a spring boot web application project, i.e. the project need to be deployed on tomcat. The project can be created as maven based project and hence required dependencies we can specify in pom.xml file

As the project needs to be deployed using Tomcat, it has to be packaged as “WAR”(Web Application Resource or Web application Archive).

Basically, pom.xml should have spring boot related dependencies like

A controller class is required through which we can able to invoke the services either as a GET method or  POST method. As a sample, let us see “SampleRestControllerExample.java” which contains two methods as “GET” methods

Two methods are written which provide a static text as output.

on calling “geeks-web-services/greet”, displays Hello Geek, Fast and easy development can be possible on Spring-based applications by reducing source code.

Step 2: Ways of creation of a Spring Boot WAR

There are 3 ways of creating a Spring Boot WAR:

SpringBootWarDeploymentOnTomcatServer.java is our Main class

We can run the maven steps using the command line 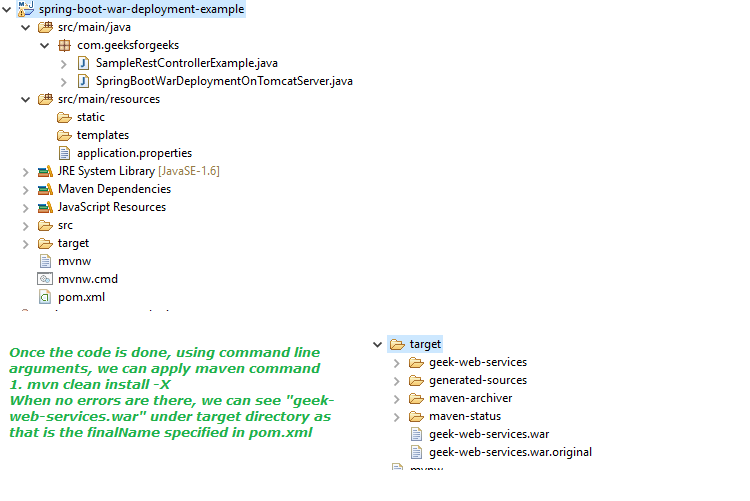 Step 3: Deploying the WAR to Tomcat

Apache Tomcat Server has to be installed if not installed earlier. Preferably higher versions of tomcat will be helpful. As an example, We are using tomcat version 9.0.x

To use the appropriate tomcat version and java version, it will be helpful to check the HTML file. In our previous step, we have got “geek-web-services.war” and it has to be copied under the “webapps” folder of tomcat. 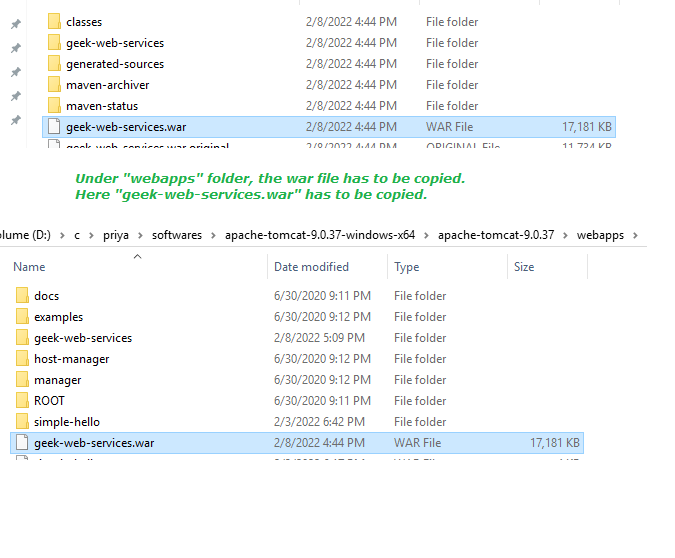 Now, open the command prompt and point to the tomcat location’s bin folder

From bin folder “startup.bat” needs to be given 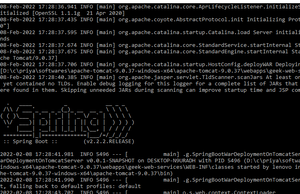 And also our war file is deployed in tomcat too. The below screenshot confirms that

Project Explanation: It is as justified via video provided below as follows:

Conclusion: As explained above, a spring boot project can be deployable in Tomcat. Do remember certain important points as listed: