Span<T> is a new feature introduced with C# 7.2 and supported in the .NET Core 2.1. It provides a type-safe access to a contiguous area of memory. This memory can be located on the heap, stack or formed a unallocated memory. Span<T> is defined as a ref struct, which means it is limited to being allocated only on the Stack. The main reason for the ref struct design is to ensure that when using of Span<T> it causes no additional heap allocations. Span<T> improves execution speed and reducing memory allocations in existing code. 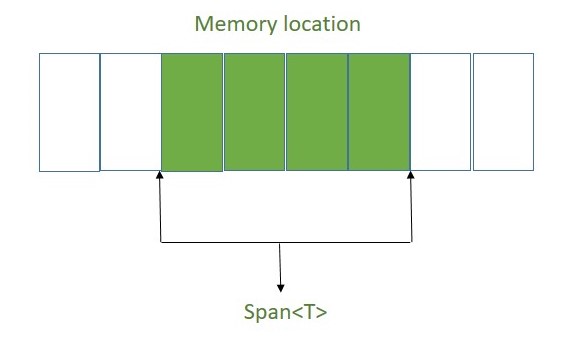 Here, Span<T> references some contiguous memory(colored blocks) that has already been allocated.
Span<T>.Enumerator struct provides an enumerator for the elements of a Span<T>. Where Span<T> provides a type and memory safe representation of a contiguous region of arbitrary memory.
Syntax:

Parameter:
Here the parameter is T, where T is the type of items in the Span<T>.
Example: