.NET is a software framework that is designed and developed by Microsoft. The first version of the .Net framework was 1.0 which came in the year 2002. In easy words, it is a virtual machine for compiling and executing programs written in different languages like C#, VB.Net, etc.

There are three significant phases of the development of .NET technology.

OLE Technology: OLE (Object Linking and Embedding) is one of the technologies of Microsoft’s component document. Basically, its main purpose is to link elements from different applications with each other.

COM Technology: The technology of the Microsoft Windows family of the operating system, Microsoft COM (Common Object Model) enables various software components to communicate. COM is mostly used by developers for various purposes like creating reusable software components, linking components together to build applications, and also taking advantage of Windows services. The objects of COM can be created with a wide range of programming languages.

.NET Technology: .NET technology of collection or set of technologies to develop windows and web applications. The technology of .Net is developed by Microsoft and was launched in Feb. 2002, by basic definition, Microsoft’s new Internet Strategy. It was originally called NGWS (Next Generation Web Services). It is considered to be one of the most powerful, popular, and very useful Internet Technology available today.

Common Language Runtime(CLR): CLR is the basic and Virtual Machine component of the .NET Framework. It is the run-time environment in the .NET Framework that runs the codes and helps in making the development process easier by providing various services such as remoting, thread management, type safety, memory management, robustness, etc. Basically, it is responsible for managing the execution of .NET programs regardless of any .NET programming language. It also helps in the management of code, as code that targets the runtime is known as Managed Code, and code that doesn’t target to runtime is known as Unmanaged code.

Framework Class Library(FCL): It is the collection of reusable, object-oriented class libraries and methods, etc that can be integrated with CLR. Also called the Assemblies. It is just like the header files in C/C++ and packages in java. Installing the .NET framework basically is the installation of CLR and FCL into the system. Below is the overview of the .NET Framework. 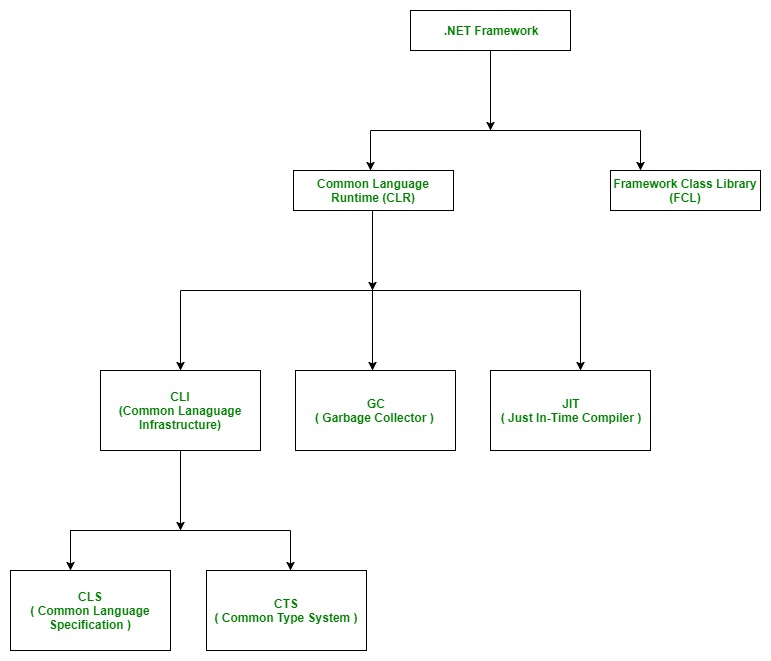 Is the .NET application platform dependent or platform independent?

Release History of .NET Framework and its compatibility with the different Windows version