Silhouette Algorithm to determine the optimal value of k

In the Silhouette algorithm, we assume that the data has already been clustered into k clusters by a clustering technique(Typically K-Means Clustering technique). Then for each data point, we define the following:-

C(i) -The cluster assigned to the ith data point

The silhouette coefficient s(i) is given by:-

We determine the average silhouette for each value of k and for the value of k which has the maximum value of s(i) is considered the optimal number of clusters for the unsupervised learning algorithm.

Let us consider the following data:-

We now iterate the values of k from 2 to 5. We assume that no practical data exists for which all the data points can be optimally clustered into 1 cluster.

We construct the following tables for each value of k:- 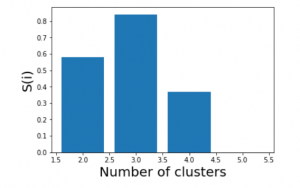 We see that the highest value of s(i) exists for k = 3. Therefore we conclude that the optimal number of clusters for the given data is 3.