Preprocessing is a stage where preprocessor directives are expanded or processed before source code is sent to the compiler. The most common example of such directive is #include or #define. A preprocessor output has “.i” extension.

Now on command prompt, the output can be preprocessed in two ways:

Method 1 – inside cmd.exe: This method is not recommended.

Here, output can’t be shown as header file iostream will expand up to 50000 lines. This will print all the data on the command prompt which might take a few moments as cout is quite slow in printing. Press any key to stop printing on prompt. The command prompt doesn’t retain all 50000 lines. It has its own limits after which earlier outputs can’t be seen.

Use the below-given command to get hello.i 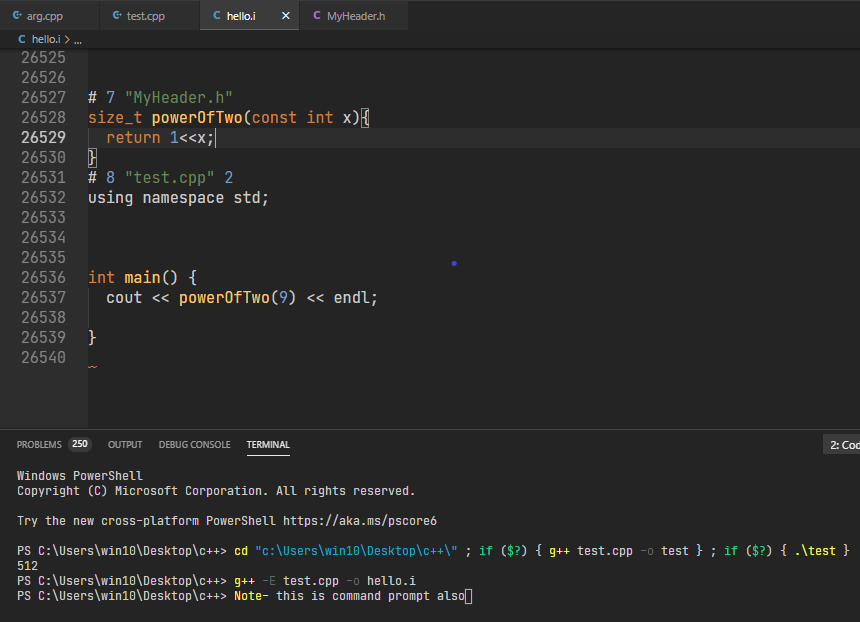 Explanation: In the above output, there are only 26000 lines. It is normal as iostream is a big header file and also includes many other header files that do include others. #include directive just copies the content of respective header files.
As noticed, the actual program lies at the very end at 26527 lines but still, it gives error messages for the correct line. Also, all content of multiple files is wrapped into hello.i but still error messages received for correct file context.

How does this happen?

This is the line control directive. It will tell the compiler that the next line is the 7th line in the file MyHeader.h. If the above code is executed, then the function powerOfTwo() is defined at line number 7. Also, macro VAL is completely replaced by 9.

In the above example, the semi-colon is copied and pasted from MyHeader.h to the line next to cout statement by #include directive. Hence, no error will generate here. Also, Myheader.h can be a text file, a python file, or HTML file no matter what, #include will just copy it.

Previous
Maximum value of unsigned char in C++
Next
Classes vs Structure vs Union in C++
Related Articles
1. C/C++ Preprocessor directives | Set 2
2. Convert C/C++ program to Preprocessor code
3. Difference between Preprocessor Directives and Function Templates in C++
4. Output of C++ programs | Set 34 (File Handling)
5. Fork CPP | Course Structure
6. Get first and last elements from Array and Vector in CPP
7. Why Java Language is Slower Than CPP for Competitive Programming?
8. How to create Binary File from the existing Text File?
9. Difference Between C++ Text File and Binary File
10. C++ Program to Copy One File into Another File
Article Contributed By :