Phthalic Acid is a colorless, crystalline organic compound invented by French chemist Auguste Laurent through the oxidizing naphthalene tetrachloride. It is an isomer of isophthalic acid and terephthalic acid. The chemical formula of Phthalic Acid is C6H4(COOH)2. It is used as an anhydride to produce chemicals like dyes, perfumes, phthalates, saccharin, and many other useful products. It is also used in the production of anthraquinone, phenolphthalein, and phthalocyanine pigments in smaller amounts. The IUPAC name of Phthalic Acid is 1,2-, benzene dicarboxylic acid. The other names of Phthalic Acid are ortho-Phthalic acid, Benzene-1,2-dioic acid, and 1,2-Benzenedioic acid.

The structure of Phthalic Acid is very similar to that of aromatic carboxylic acid. Phthalic Acid consists of 2 carboxy groups at ortho positions. It is the conjugate acid of a phthalate(1-) and a phthalate. 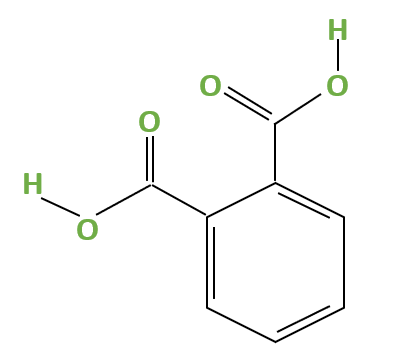 Any acid is harmful to the human body. Phthalic Acid is very sensitive to extreme heat. If Phthalic Acid is exposed to the body it causes irritations of skin, eyes, respiratory organs. If a high amount of Phthalic acid has been in contact, it can cause narcosis.

No Phthalic Acid is not a strong acid. It is a weak dibasic acid that has a pKa values 2.89 and 5.51 but it reacts very vigorously when it comes in contact with strong bases.

Question 4: How to convert Phthalic Acid to Phthalic anhydrate?

Question 5: What are the uses of Phthalic anhydrate?

Phthalic anhydride is used in wide variety of applications around the world, from the plastics industry to resin synthesis, agricultural fungicides, and amines. It is also used to catalyze the oxidation of ortho-xylene or naphthalene. Phthalic anhydrate is made by oxidizing o-xylene and naphthalene in the vapor process. It can also be prepared form Phthalic Acid.

Question 6: What happens when Phthalic Acid reacts with ammonia?

Phthalic Acid C6H4(COOH)2 reacts with ammonia (NH3) to give an ammonium salt- Ammonium phthalate. This on further heating gives phthalimide.