A process in which one or more reactants combine together to form one or more different substances, called products. The forming substances are called chemical elements or compounds. A chemical reaction results in the rearrangement of the constituent atoms of the reactants to result in the formation of products. The physical appearance of reactants are different from the products. Chemical reactions happen continuously in general surroundings, for instance, rusting of iron or fermentation of wine etc.

What is a Chemical Reaction?

These reactions are accompanied by the appearance of gas, precipitate, and color, light. For instance, if we consider the reaction of oxidation of propane, it results in the release of heat and light, denoted by the following reaction,

There are various types of chemical reactions based on the way the reactants combine together, the by products etc, for instance,

The chemical equations are denoted using the chemical formulae and symbols to represent the changes occurring between the reactants and products.

A chemical equation is represented by reactants written on the left-hand side and the products on the right-hand side. A symbol, possibly an arrow also denotes the direction of the reaction. Also, each of the reacting entities is assigned its corresponding stoichiometric coefficient.

Examples of Chemical Equations are:

These groups are responsible for transferring oxygen atoms to the substrate. However, some of the redox reactions, oxidation – reduction takes place in absence of oxygen atoms. Some of the examples of the oxidising agents are MnO4–, CrO4-2 etc.

Oxidizing agents find their usage in a large number of both commercial and industrial applications, some of which are,

A reducing agent is an element or a compound which loses or “donates” an electron to an electron recipient. The recipient is the oxidising agent, as described earlier. Therefore, the reducing agents are also called a reductant, reducer, or electron donor.

Any good reducing agent consists of the atoms which have low electronegativity and a good tendency to attract the bonding electrons having negligibly low ionization energies. 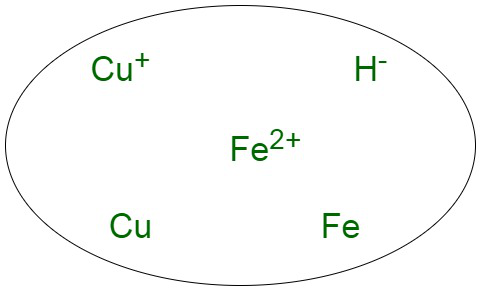 Following are the common reducing agents,

Following are the differences between Oxidising Agent and Reducing Agent:

Question 2: Describe an oxidation reaction where the oxidation of a positive oxidation state increases over the reaction.

Question 3: Sulphuric acid and hydrochloric acid are not oxidising agents in comparison to nitric acid. Explain why.

Hydrochloric acid acts as a reducing agent, since, it loses a hydrogen atom. Thereby, it carries out the reduction of other substances and gets oxidised to chlorine. Similarly, sulphuric acid acts as an oxidising agent which on carrying out thermal decomposition, yields nascent oxygen. Nitric acid (HNO3) is considered to be a powerful oxidising agent and the oxidising properties are due to the production of nascent oxygen which it gives on decomposition.

Question 4: Identify the reducing agent in the following reactions :

In the first reaction, ammonia (NH3) is reducing agent, since the oxidation state of oxygen is reduced from 0 to -1. The halogen, Fluorine (F2), undergoes the reduction reaction, therefore, acting as an oxidising agent. Hence, water (H2O) is a reducing agent here.

We know, the formation of aqua regia can be depicted by the following chemical reaction:

that is, Nitric acid reacts with the hydrochloric acid to form a mixture called aqua regia as the final product. The right hand side contains a product called NOCl nitrosyl chloride which is a stronger oxidizing agent than nitric acid. Therefore, pure nitric acid does not dissolve noble metals but aqua regia dissolves them easily.

Question 6: What are redox reactions?

Redox reactions are formed by the combination of the terms oxidation-reduction chemical reactions in which the reactants, that is the constituents atoms and molecules undergo a change in their oxidation states. All the redox reactions can be further broken down into two different processes – a reduction process and an oxidation process which occur simultaneously.

Question 7: Why is oxygen considered to be oxidising agent? Explain using a reaction with a metal.

Oxygen in elemental form is a strong oxidizing agent. Oxygen shows good reactivity and easily combines with most other elements and many compounds. When a compound like magnesium reacts with oxygen, the magnesium atoms give or donate electrons to oxygen (O2) molecules. This results in the reduction of oxygen. Magnesium metal therefore acts as a reducing agent. Magnesium is therefore oxidised. Oxygen, thereby is an oxidizing agent in this case.

Complete Interview Preparation
View Details
System Design-Live Classes for Working Professionals
View Details
Data Structures & Algorithms- Self Paced Course
View Details
Most popular in Class 10
Most visited in School Chemistry
We use cookies to ensure you have the best browsing experience on our website. By using our site, you acknowledge that you have read and understood our Cookie Policy & Privacy Policy