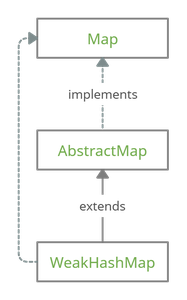 Every key in a map must be unique and can unite with a maximum of one value. Do note that a map itself cannot be a key. The order of key-value pairs is not guaranteed in a WeakHashMap. What makes WeakHashMap different from a regular HashMap is that a WeakHashMap uses weak keys.

Strong Reference: A Strong reference is the type of reference that is generally used. The garbage collector does not reclaim objects having a strong reference.

Weak Reference: If an object does not have a strong or a soft reference, the object is said to have a weak reference.

The Presence of weak keys means the garbage collector will remove the keys once they are no longer in usage. On the other hand, the values are held by Strong references. So the value objects must not refer directly to their key else; this will prevent the key from being reclaimed. WeakHashMap supports null keys as well as values.

1.WeakHashMap(): This will generate a WeakHashMap object with an initial capacity of 16 and a load factor of 0.75

4.WeakHashMap(Map map): This will generate a WeakHashMap object and will copy all the key-value pairs from the specified map in the process.

The operations of WeakHashMap can be classified as either destructive or non-destructive. Destructive methods modify the map on which they operate.

When a key is inserted into the WeakHashMap, the following process occurs internally:

A) public T put(K key, T value): Inserts the given key-value pair in the WeakHashMap. If the key already exists then the value gets updated. This method returns the previous value for the key. If either the key is being inserted for the first time or the previous value is null then null is returned

B) public void putAll(Map m): Inserts all the mapping from map into the current map. If any keys are common then the value gets updated. If the map m specified is null then a NullPointerException is thrown.

A) public void clear(): Removes all the mappings from the map

1. containsKey: Returns true if the map contains the specified key, else returns false.

2. containsValue: Returns true if the map contains a key with the specified value, else returns false.

3. get: Returns the value attached with the specified key. null is returned either if the key doesn’t exist or if the value itself is null.

4. size: Returns the number of key-value pairs present in the map at the instant when the method is called.

5. isEmpty: Returns true if no key-value pairs are present in the map at the instant when the method is called, else returns false.

6. entrySet: A key-value pair is also known as a map entry. The Map.Entry interface allows us to work with map entries. entrySet method will return a set of all the present map entries.

7. keySet: Returns a set containing all the keys present in the map. The changes made in the map are reflected in this set. Conducting operations on the map and traversing the set at the same time may result in undefined behavior.

8. values: Returns a Collection view of all the values present in the map. The changes made in the map are reflected in this collection. Conducting operations on the map and traversing the collection at the same time may result in undefined behavior.

The following program contains the WHI class, which implements the WeakHashMap API. This implementation is then used here to map grades to scores.

Note: The grades and cut off might get printed in an unorderly manner. This is because the order is not guaranteed in a WeakHashMap.