Is a Circle a Plane Shape?

Geometry is a mathematical subject that studies plane shapes and solid shapes along with their properties and way of representation. According to the standard definition of geometry, it is the study of shapes, structures, their size, angles formed, and representation. Euclid is widely known as the father of geometry. It is the study that explains the properties of flat shapes like circles, triangles, squares, rectangles, etc, and solid shapes like sphere, cylinder, cone, cube, cuboid, etc.

A circle is a bound closed flat shape that is represented on a plane surface. A circle is a two-dimensional figure and is created by a set of points that are at a fixed distance(also known as radius) from the fixed point(also known as center) in the plane. Or was can say a circle consists of a single face and does not have edges or vertices. The number of points lying in a circle is uncountable in numbers and the direction of the line keeps changing with each point. Following are some commonly used terms in a circle: 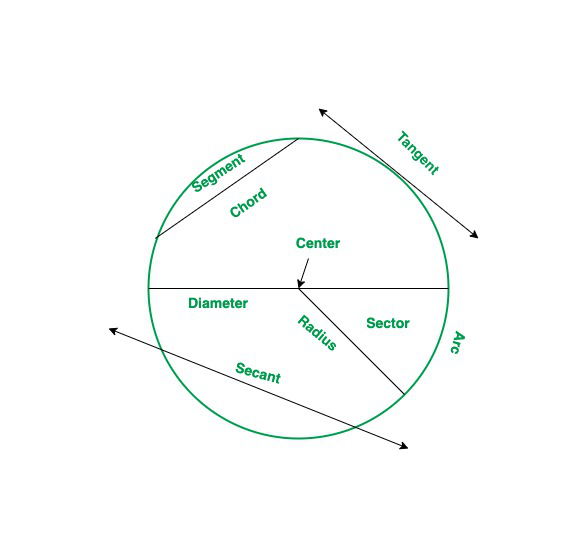 Is a circle a plane shape?

Question 1: What is the diameter of a circle?

Mathematically, the formula for the length of diameter can be written as

Question 2: What is the radius of a circle?

Question 3: What is a chord of a circle?

In a circle, a chord is a line segment whose endpoints present on the circular arc or boundary of the circle. It Joins two endpoints in a curve. A chord can be measured in length as it has two fixed endpoints.

Question 4: How can you determine the length of a chord?