In this article, we will discuss how the variable-length argument works.

A variable number of arguments are represented by three dotes (…).

Calling Convention: Calling convention refers to how a function is called, how parameters are passed, and how the stack is cleaned. C/C++ has a variety of calling conventions but we are only concerned with __cdecl and __stdcall.

Both are very similar but have some differences.

Now both calling conventions pass parameters right to left. C/C++ developers choose right to left instead of left to right.

Memory Layout: The memory layout is discussed below: 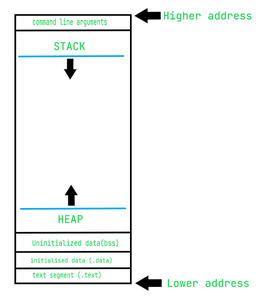 The only thing that needs attention is the stack and heap segment growing in the opposite direction.

Let’s understand this by function:

Inside main() we have a function func(arg1, arg2, arg3)
When func is called then main() is called “caller” and func() is called “callee”
Lets see its stack
caller local variable   -> lower on stack higher on address
—- (other stuffs)
arg3 (rightmost)
arg2
arg1
—-

The first argument gets the lowest address and all parameters will have a continuous address in the stack.

Below is an example to show how <stdarg.h> works:

Explanation:
Built-in implementation has some restrictions, let’s have a look at them and see how it can be overcome. One of them is there is a need to pass the first argument mandatory, and let’s see why it is mandatory and how to avoid it.

<stdarg.h> uses va_list, va_start, va_arg and va_end. The problem can be broken into 2 parts:

va_list: It is a typedef of char* but this is quite different, as when it is used as a type of C-string we get unpredictable results. This is because it is not common typedef. It is built-in defined.

va_start: This is a macro and what it does is to initialize ap, which is actually va_list type (char*) with an address ahead of the first parameter, which is arg1. This is the reason why there is a need to pass the first argument mandatory. It can be any value of any data type but for simplicity, often the number of arguments are passed. It is used to identify the address on the stack where arguments are continuous.

va_arg: This macro is quite complicated. It does two things.

Let’s see what these three dots are. Actually, It is an eclipse operator ( . . . ) and it is C++ defined. This operator is used to pass a variable number of arguments. This is how stdarg.h works, if unable to use the first argument in the variadic function. We can make use of it as

However, this has no meaning as we don’t know how many arguments are passed, so how can we make use of them?

My Personal Notes arrow_drop_up
Previous
Create a string of specific length in C++
Next
Returning a function pointer from a function in C/C++
Recommended Articles
Page :
How to Access Global Variable if there is a Local Variable with Same Name in C/ C++?
19, Jul 10
Why copy constructor argument should be const in C++?
22, Sep 13
Argument Coercion in C/C++
26, Dec 18
Difference between Argument and Parameter in C/C++ with Examples
25, Nov 19
Problem with Single Argument Constructor in C++ and How to solve it
18, Nov 21
C function argument and return values
05, Dec 17
Variable Length Arrays in C/C++
21, Jun 15
How does generic find() function works in C++ STL?
26, Feb 21
Set a variable without using Arithmetic, Relational or Conditional Operator
02, Jul 16
Using a variable as format specifier in C
27, Mar 17
Different ways to declare variable as constant in C and C++
06, Sep 17
Different ways to initialize a variable in C/C++
16, Aug 18
Efficient ways to compare a variable with multiple values
14, Oct 20
Assigning function to a variable in C++
25, Jun 21
Installing MinGW Tools for C/C++ and Changing Environment Variable
08, Dec 21
Program to find Length of Bridge using Speed and Length of Train
01, Oct 18
Counts of distinct consecutive sub-string of length two using C++ STL
16, Nov 16
5 Different methods to find length of a string in C++
05, Jun 17
The length of a string using pointers
11, Dec 17
Find longest length number in a string
29, Jun 18
match_results length() in C++ STL
23, Aug 18
Count all Prime Length Palindromic Substrings
23, Jan 19
Count of sub-strings of length n possible from the given string
17, Apr 19
Length of race track based on the final distance between participants
19, Jun 20
Article Contributed By :