How to define a function in ES6 ?

Let us first understand what exactly the function is and how to declare a function in ES6 using different syntaxes. 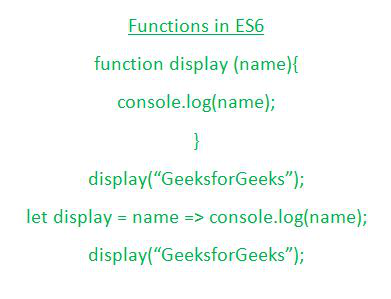 Following are some of the syntax which can be used to declare a function in ES6:

Syntax 1: The first syntax is the basic syntax that is valid from the starting ES version till this ES6 version as well.

If one wishes to store the function in a variable then by using the following syntax one can easily do that.

Syntax 2: Now another syntax of declaring a function is the Arrow function syntax which is described as follows and the calling of these particular type of function is quite simple as that of the previous type of functions which is just writing the name followed by the round braces, including the parameters if any (like this display(name) and so on).

Even if we don’t want to write the round braces then also we may proceed by using the following syntax.

Now that we have analyzed who writes a function in ES6 let us quote some examples which would help us to understand the functions declarations in a better and effective way.

Example 1: In this example, we will see the normal function declaration.

Output: The output of the above code snippet is shown below-

Example 2: In this example, we will be using Rest parameters inside the normal function (which actually means that we are passing an infinite number of values as parameters of a function) and further checking the length of passed parameters.

Output: The output of the above code snippet would be as follows-

Example 3: In this, we will using arrow function syntax, and by using that we will be finding out the factorial of the given number.

Output: The output of the above code snippet would be as follows-

My Personal Notes arrow_drop_up
Previous
JavaFX Tutorial
Next
How to create a stacked progress bar using Bootstrap 5 ?
Article Contributed By :