How to Create Your Own Package in Golang?

Since Go lang run is not supported on this IDLE, I’ve attached a screenshot of the output below. 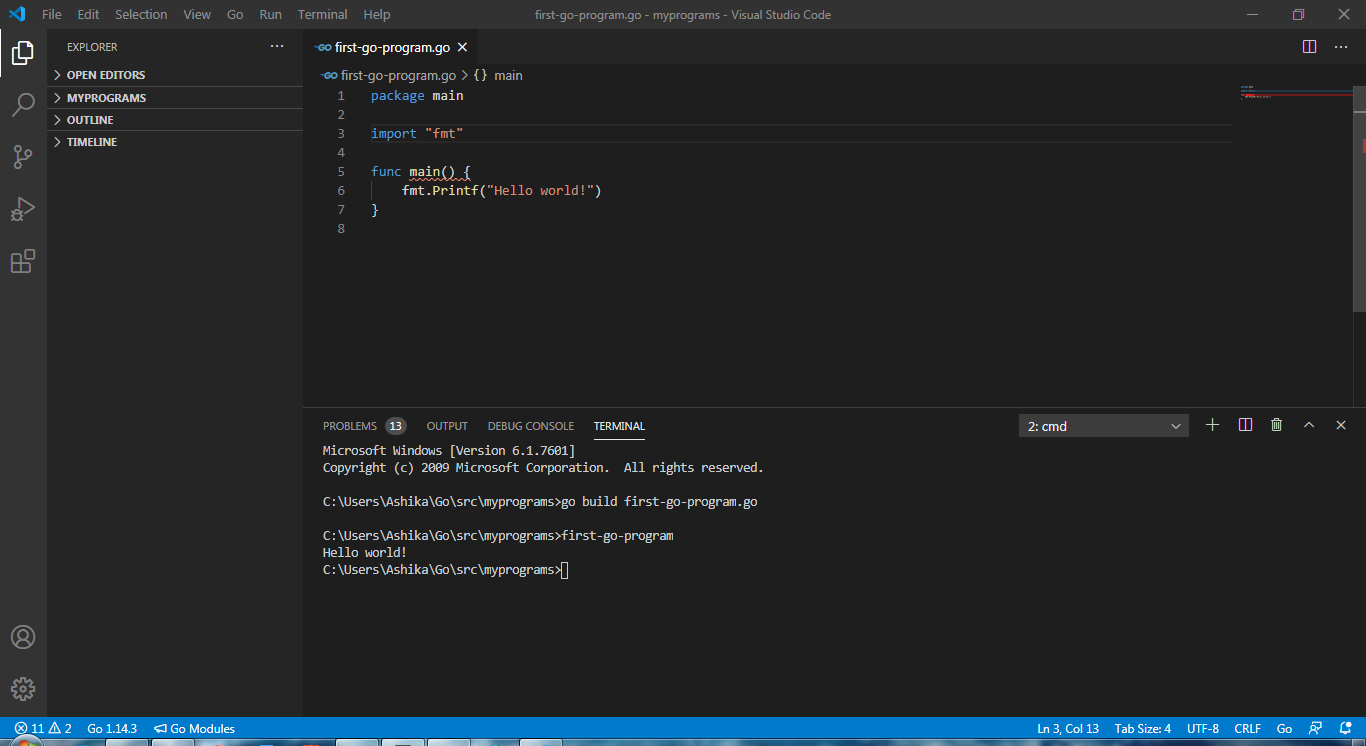 The first program that prints hello world on the console. The output screen is likely to be as in the image if you use Visual Studio on the Windows platform.

We must have seen this program a million times until now but do we really understand what’s in it? Or do we just scan the keywords written in the code and copy-paste it and then implement in further in our programs? We all know the answer! But let’s try to understand the code now.

This statement makes the package available as an executable code of the program. A package can simply be explained as a capsule that binds multiple pieces of code together which may contain multiple libraries, multiple functionalities all included in one capsule that can be easily used in any program by the user by just importing or mentioning the package.

It is a simple declaration of the function main that holds the executable driver code.

In this line, it may appear simple but there is a logic behind that simple dot (‘.’) that lies in between fmt and Printf. The dot is a mediator that performs an important search. The term preceding the dot here is the package name and the name succeeding the dot here is the set of function that belongs to the package mentioned before the dot. Printf is a function that lies under the fmt package and it offers the “Printing input string (in this case) on the console in one line”.

As discussed earlier, fmt is a pre-built package, developed by someone else. We find many things in these pre-built codes but why can we not try building our own packages? Well, building our own packages increases the readability, reusability, and efficiency among our work organization as it will be specific about the work we do and not the rest of the world! Let’s see a demo of how to build a simple new package.

Well, before you proceed you need to ensure the following steps, these are essential to ensure smooth workflow:

Well, package codes are different from normal file codes. So our process doesn’t end here. Writing your code inside the package file is the first step. After writing the code, save your file as the name of the package that you mentioned in your first line of code. For Example, In my case:

After naming your file, you need to perform some important steps. As this is a package that you are creating, you will need the go compiler to build and compile your code.  And for that, go to the folder where your package file code is located. Open command prompt in that directory.  Run the following command in cmd:

This command will compile your Go package and make it ready for use. Now create the main file to use your first package. Here, we are sharing the code from our main file

Save your code and execute the following command on cmd in the directory where the main file is
located ———–> “go build file_name.go”

And now your main file has compiled successfully. To execute it, enter the following command on your cmd:
“file_name”

You will notice that the calc function executes exactly as coded. A demo from my package run is shown below for reference. 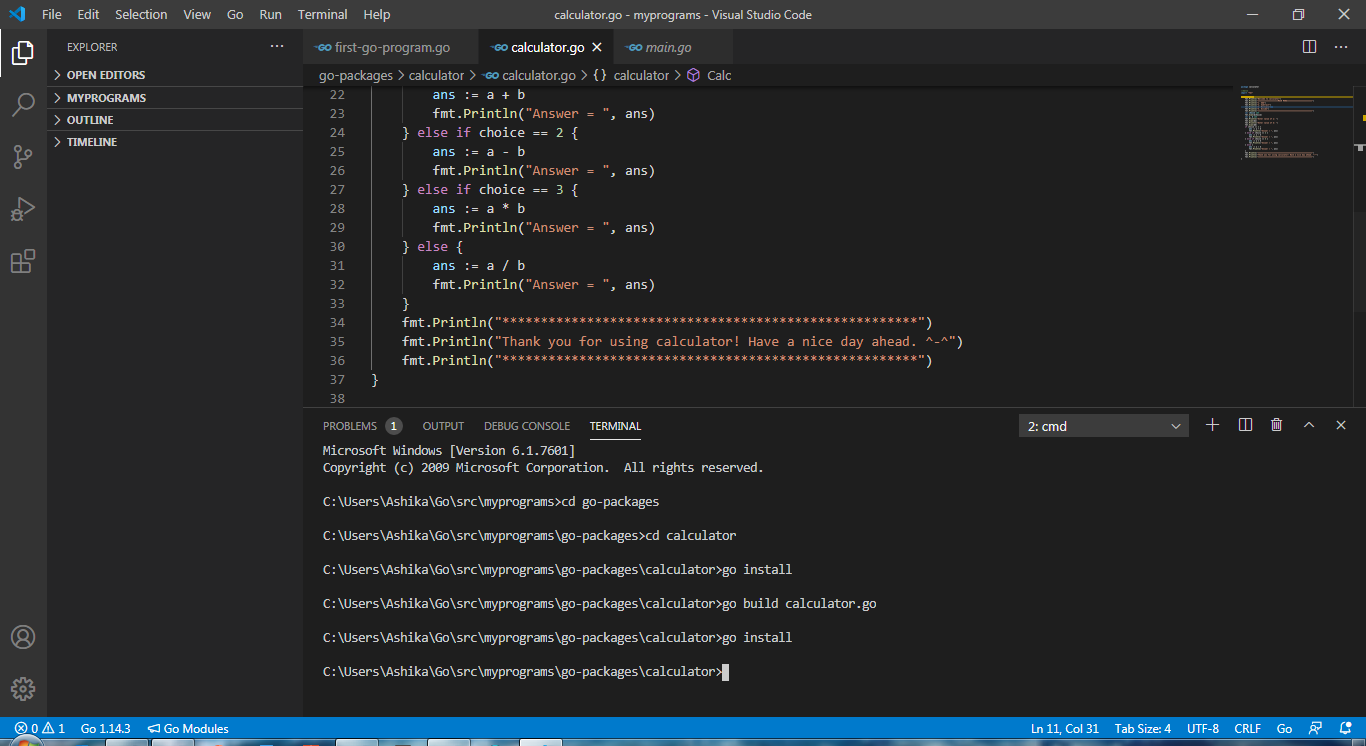 This is the calculator package code file and in the terminal section are the commands that need to be executed and the outputs are also shown in the screenshot mentioned above. Also, take note of the directories where I’ve opened the terminal and what commands have been executed. 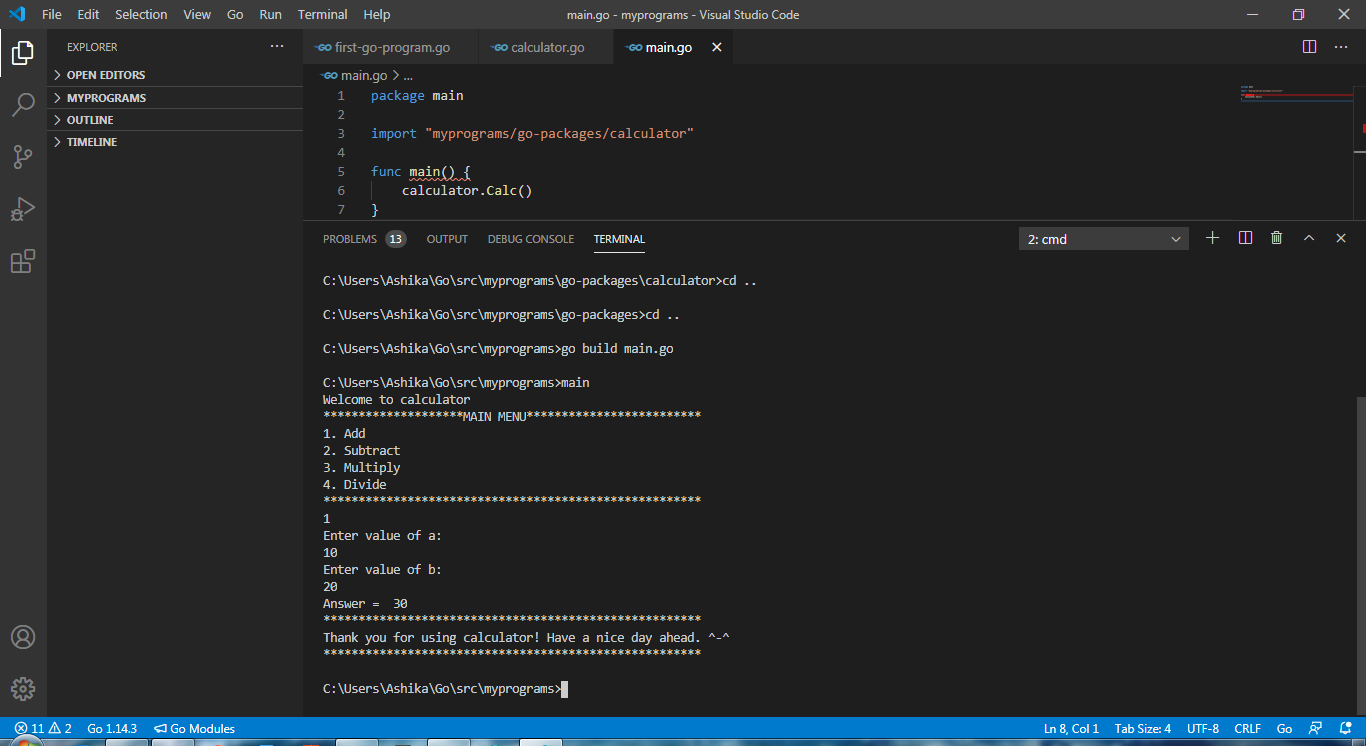 This is the main code file where the package is imported and executed. Observe how simple the main file code becomes once you create a package. The package can be reused a million times in any code now. If you make it available on the cloud then anyone on the web can use it. Notice the commands on the terminal and the directory as they’re very important.

Complete Interview Preparation
View Details
System Design-Live Classes for Working Professionals
View Details
Data Structures & Algorithms- Self Paced Course
View Details
Most popular in Go Language
More related articles in Go Language
We use cookies to ensure you have the best browsing experience on our website. By using our site, you acknowledge that you have read and understood our Cookie Policy & Privacy Policy