It is often seen a bright flash of light in the clouds followed by a sound called thunder. This bright flash of light is known as lightning. Lightning is an electric discharge in the atmosphere that happens when two oppositely charged clouds collide or when a charged cloud collides with the earth. It is caused by electric charges in the atmosphere.

What are the electrical charges?

Since, an atom contains subatomic particles like electrons, protons, and neutrons. All these particles share a standard property that carries electrical charges. Electrons have an electric charge on them whereas protons have a charge. It is understood that atoms carry a balanced charge, but these charges could typically become out of order.

An object is referred to as electrically neutral if it’s carrying a balanced proportion of positive and negative charges. An object is termed a charged object if there’s an imbalance of electrons and protons in it.

When two objects are rubbed with one another they get charged due to the transfer of electrons between them. For example, if rubber balloons are rubbed with animal fur, the balloon is formed of rubber attracts the electrons from the animal fur. This leads to rubber having more electrons whereas fur having a shortage of electrons. In an equivalent method, if a plastic comb is rubbed with dry hair the comb acquires some charge.

The strength of an electrical charge depends upon various factors such as the temperature, humidness, and properties of the surface like its material.

Charges will transfer from one object to a different with the assistance of physical phenomenon and induction:

2. The sudden movement of air currents causes the separation of charges in the atmosphere.

4. Positive charges accumulate above the ground as well shown below:

Accumulation of positive charges above the ground

5. When negative and positive charges collide, bright light and sound are made. As it is known air is a poor conductor of electricity but when the magnitude of charges becomes high, the air doesn’t resist the flow of the charges, Hence positive and negative charges being the opposite charge, attract each other, and streaks of light are formed.

6. Streaks appear to the observers like lightning and so the process is named electric discharge, 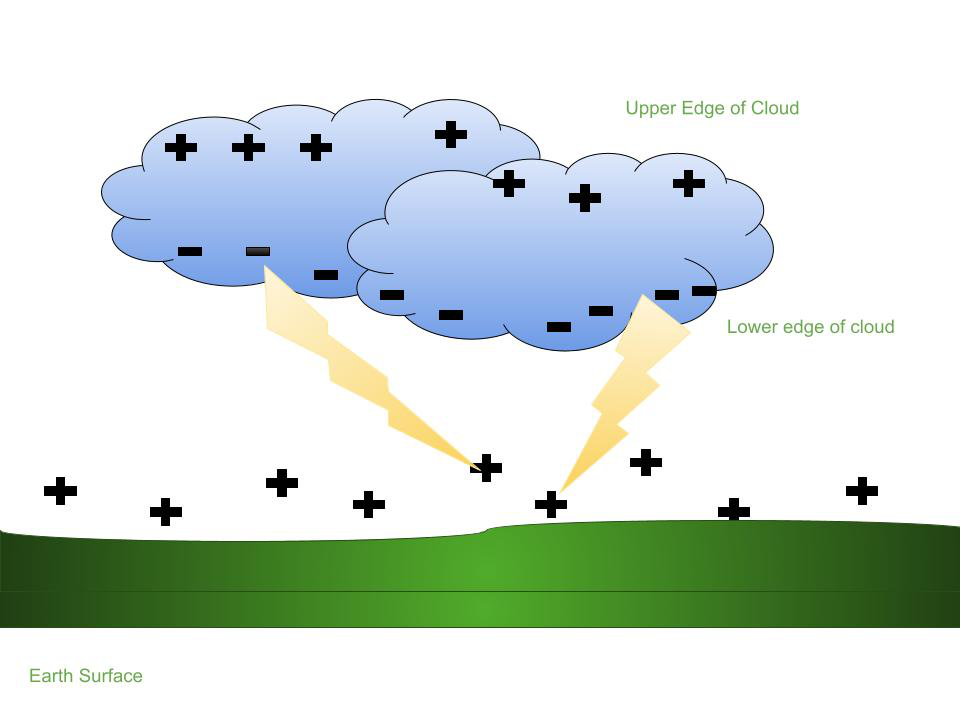 Lightening might destroy the property and life, so preventive measures need to be taken.

Since during lightening no open places are safe, so it is important to find a safe place. Once you hear the sound of thunder you shall rush to a house or shop which is a safe place. Car or any vehicle is also a safe place so while traveling you are safe.

Situation 1: Outside the house

Situation 2: Inside the house

However, the protection in buildings is done using lightning conductors. A lightning conductor is a device used to protect buildings from the effect of lightning. During construction, a metallic rod taller than the building is positioned in the building’s walls. The rod’s one end is held in the open, while the other is buried deep underground. The rod provides a convenient path for electric charges to be transferred to the ground. Metal columns, electrical cables, and water pipes used during construction all help to protect us to some degree.

Problem 1: Who discovered the static electricity or lightning in clouds and when?

A scientist named Benjamin Franklin in 1752 discovered the static electricity or lightning in clouds.

Problem 2: What happens when two clouds with unlike charges approach each other?

When two clouds with unlike charges approach each other, lightning strikes.

Lightning is caused by the accumulation of charges in the clouds.

Problem 4: What are the harmful effects of lightning on a lightning victim?

When lightning hits a tree, it can burn it up and cause major electrical damage. When a person is struck by lightning during a thunderstorm, the electric energy travels through his or her body, causing serious burns and eventually death.

Problem 5: Suggest three measures to protect ourselves from lightning.

Three measures of protection are:

(i) Stay under the covered area or inside the room.

(ii) One should not use T or phone during lightning.

(iii) One should not take bath during lightning.

Problem 6: Explain about the device that is used to protect buildings from lightning.

A lightning conductor is a device used to protect buildings from the effect of lightning. During construction, a metallic rod taller than the building is positioned in the building’s walls. The rod’s one end is held in the open, while the other is buried deep underground. The rod provides a convenient path for electric charges to be transferred to the ground. Metal columns, electrical cables, and water pipes used during construction all help to protect us to some degree.

Problem 7: Discuss the sparks that Greeks knew about.

The Greeks were already responsive to the electrical charges from 600 B.C. They knew that once Amber (a variety of organic compounds or an artificial polymer) and fur square measure rubbed along, then amber will attract lightweight objects like hair. Similarly, woolen garments or polyester garments additionally attract hair and may turn out a touch spark or crepitation sound after the square measure began from the body. This is often attributable to electrical charges. Benjamin Franklin was a yank mortal World Health Organization in 1752 discovered and established that lightning and spark made from these garments square measure all same things.

My Personal Notes arrow_drop_up
Previous
Best Project Development Tips for Every Computer Science Student
Next
Class 10 RD Sharma Solutions - Chapter 4 Triangles - Exercise 4.5 | Set 1
Recommended Articles
Page :
What is Lightning?
24, Mar 21
How ajax works? Difference between angular js and jquery
12, Oct 18
How addEventListener works for keydown on HTML 5 Canvas ?
30, Jan 20
How HashTable Works Internally in Java?
03, Jan 21
How to create an image slider works with radio button ?
18, Jan 21
How the single threaded non blocking IO model works in NodeJS ?
04, Feb 21
How z-index works in CSS ?
17, Mar 21
How getElementByID works in JavaScript ?
16, Mar 21
Bitwise XOR of Bitwise AND of all pairs from two given arrays
06, May 21
Flexbox-Layout in Android
03, May 21
How to access ExpressJS env variables in an API endpoint ?
03, May 21
Top 5 JavaScript Projects For Beginners on GFG
03, May 21
Article Contributed By :