Encryption is the process of converting information or data into a secrete code, especially to prevent unauthorized access. In these cases also we will do the same, For encryption, we will convert the image into a byte array and after converting it we will apply XOR operation on each value of the byte array and after performing XOR operation on each and every value of byte array will be changed. After performing the operation now we will write new data in Image due to which we are unable to open the Encrypted Image. Here are key will act as a password to Encrypt and Decrypt the Image.

As we know that how to perform XOR operations now we will see how XOR operation will work here. Let’s consider an example of sample input and output.

Here, is the screenshot of the above example. Let’s have a look. 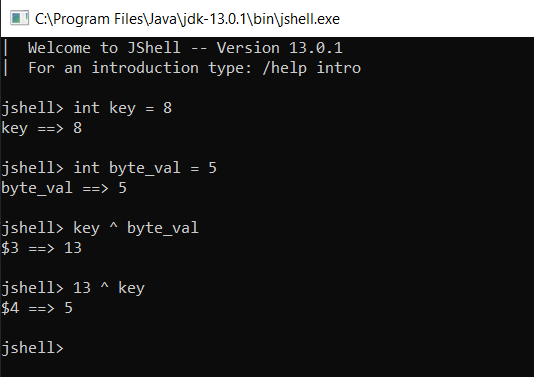 XOR operation performed between each and every value of byte array and key due to which all data of Image get change and due to which we are unable to open our Image. Now, whenever we apply a Decryption operation with the same key-value byte array value get the change to its original value and able to see our original Image.

Note: You can execute the given below code in any IDE offline as you need an input image location from where it can load the image as you have specified in the path for encryption and decryption.

Let’s have a look at the Screenshot for the above-mentioned steps.

Decryption means the conversion of encrypted data into its original form is nothing but Decryption. In the case of Image Decryption as well we convert out encrypted Image into its original form. Here we will use XOR operation to perform decryption as well. As we observe in the above example of XOR that how we get our original value of byte array by performing XOR operation on output and key value. Same logic we will use here.

By using the same logic of Encryption and Decryption of Image we can also create a small GUI project as well. Let’s have a look.