The word “carbon” comes from the Latin word “carbo,” which means “charcoal.” It is the fourth most plentiful element in the universe and the second most abundant element in human bodies, which may come as a surprise to us (the first being oxygen). In reality, all organic substances on the planet contain carbon in some form or element, which is why it is the foundation for the entire discipline of organic chemistry.

The number of electrons in carbon is 6, which equals its atomic number. Carbon is a non-metal that is symbolised by the letter. It consists of protons, neutrons, and electrons, all of which have a count of six. Because it can virtually infinitely connect with other carbon atoms, a carbon atom is considered unique and remarkable. This is due to its atom’s tiny size, which allows it to easily fit into larger molecules. Each of its atoms has four valence electrons in its outer shell, which can form chemical connections with molecules and other atoms.

What are Allotropes of Carbon?

The allotropes of carbon are diamond and graphite, respectively. Chemically, these minerals are made up of carbon atoms with various physical properties. These minerals are classified as polymorphs because they have the same chemical but different crystalline structures.

The atoms comprised of carbon atoms in Diamond and Graphite are bonded together by strong covalent bonds with distinct configurations in both allotropes of carbon.

Both precious stones and graphite are pure carbon and contain shift structures that represent their various characteristics. The graphite particles, on the other hand, form bonds with the three carbon atoms and become connected with the parallel plates. Diamond particles enter the four carbon atoms in a gem frame.

Diamond is a type of carbon that has its atoms arranged in a diamond cubic crystal structure. Another solid form of carbon known as graphite is the chemically stable form of carbon at ambient temperature and pressure, but diamond almost never transforms to it.

Diamond has the highest hardness and thermal conductivity of any natural substance, qualities that make it ideal for cutting and polishing equipment in the industry. They’re also why diamond anvil cells may expose materials to pressures found deep underground.

Diamond’s carbon atoms are reported to form strong chemical interactions with the four other carbon atoms, forming a flawless tetrahedron structure that extends throughout the crystal. The carbon atoms are sp3 hybridised, and the carbon-carbon atom bond lengths are equivalent. As a result, a three-dimensional network of strong covalent connections arises in Diamond. 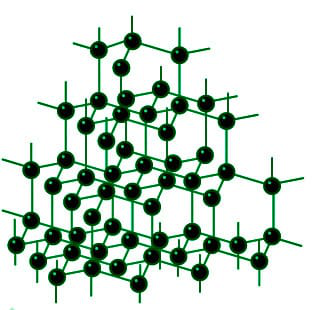 Graphite is a crystalline carbon that occurs naturally. It’s a mineral that can be found in metamorphic and igneous rocks as a native element. Graphite is a mineral with a wide range of properties.

It has low specific gravity and is exceedingly soft. It cleaves with very light pressure. It is, on the other hand, exceedingly heat resistant and almost inert when in contact with almost any other substance. It has a wide range of applications in metallurgy and in

ry due to its extreme characteristics.

Structure: All of the carbon atoms in graphite are stated to have stable chemical interactions with the other three carbon atoms, resulting in sheets that resemble chicken wire; weak forces hold the sheet in place fast. When you write with a pencil on paper, these sheets slide apart, leaving the graphite fragments as blemishes on the page.

In the Graphite structure, the carbon atoms are sp2 hybridised and oriented in the same plane, forming hexagonal rings. There are several layers of particles in the rings. With a density of 2.26 g/cm3, graphite is said to have low electrical conductivity. 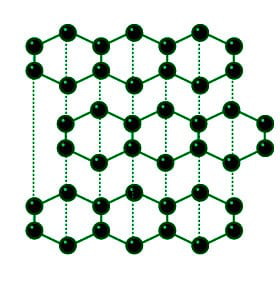 Question 1: What is the Origin of Graphite?

As a result of the sedimentary reduction of carbon compounds during metamorphism, graphite forms in metamorphic rocks. Meteorites and igneous rocks both contain graphite. Calcite, quartz, tourmaline, and micas are minerals that are linked with graphite. China, Canada, Mexico, Madagascar, and Brazil are the main export destinations for mined graphite, in order of tonnage.

Graphite coexists with silicate and troilite minerals in meteorites. Cliftonite is a small graphitic crystal found in meteoritic iron. Some minuscule grains have unique isotopic compositions, indicating that they existed before the Solar system was established. They are one of approximately 12 well-known mineral forms that predate the Solar System and have been found in molecular clouds. When supernovae detonated or low- to intermediate-sized stars evacuated their outer envelopes late in their lives, these minerals were produced in the ejecta. Graphite may be the Universe’s second or third oldest mineral.

Question 2: What are the Diamond’s Material Properties

Diamond is a solid form of pure carbon with atoms organised in a crystal structure. Solid carbon comes in a variety of allotropes depending on the chemical bond type. Diamond is one of the most prevalent pure carbon allotropes. The bonds in Diamond are sp3 orbital hybrids, and the atoms are arranged in tetrahedra, each with four nearest neighbours.

Tetrahedra are solid, and the bonds are strong, and Diamond has the most atoms per unit volume of any known substance, which is why it is both the least and the hardest to compress.It also has a higher density, ranging from 3520 kg/m3 in pure Diamond to 3150 to 3530 kg/m3 in natural diamonds (about three times the density of water).

Question 3: Why is it that graphite conducts electricity while diamond does not?

Denatured alcohol is alcohol that has been turned unfit by mixing it with harmful compounds such as methanol, pyridine, copper sulphate, and so on. Ethanol is a widely used chemical in industry. As a result, it was subjected to an extremely low excise duty. It is necessary to denature alcohol in order to prevent its overuse for drinking purposes.

Question 5: What structural differences exist between aldehyde and ketone molecules?

Question 6: What changes have been made to detergents’ composition to make them biodegradable?

Detergents derived from long-chain hydrocarbons with the least amount of branching in their molecules breakdown faster.