SQL Server is a versatile database, and it is the most used Relational Database that is used across many software industries. In this article, let us see the comparison of SQL Server Results of Two Queries briefly. By using Azure Data Studio, let us see the concepts by starting with creating the database, table creation, locks, etc., Azure Data Studio works well for Windows 10, Mac, and Linux environments. It can be installed from

Command to create the database.  Here GEEKSFORGEEKS is the db name

Adding the tables to the database :

Creating a table with Primary Key. Here ID is a PRIMARY KEY meaning each author  will have their own ID

If explicitly “NOT NULL” is specified, that column should have values. If not specified, it is by default “NULL”. 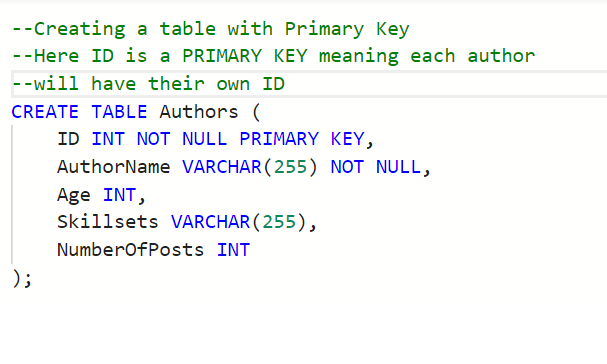 Let us insert few records into the table and check the result contents of the table.

For Comparison of SQL queries, we can use “UNION, INTERSECT, EXCEPT” CONSTRUCTS. We can check one by one

Except for construct results

The left query produces all 4 records of the table whereas the right query produces only the 1st and 4th records. Since the “EXCEPT” construct is used, the resultant of the above query will produce second and third records only (that are not available from the 2nd query).

Can you confirm what might be the output for this?

Usually, “EXCEPT” is used to find out the results of the query that should be identical or not and when the result shows no data means, the query results are identical.

Note: EXCEPT can be placed between queries only when the resultant output of both the queries are the same. If they differ, we cannot apply “EXCEPT”

Whenever there is a requirement like combining data across multiple tables or combining data of a single table that evolved from different queries, we can go for UNION. This is equivalent to “UNION” in Maths.

Let there be another table named “Authors2021” and have few records as follows: 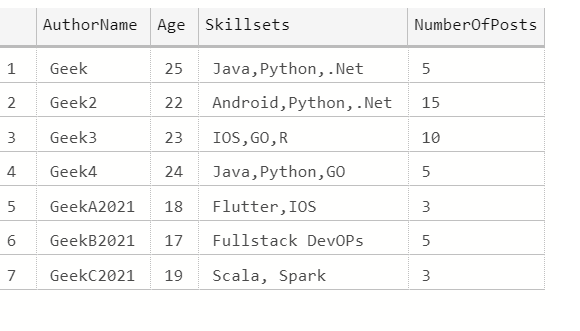 If you look at the output, the data from both the tables are combined and hence we can see the above output.

If we check the output, we do not have duplicate records.

Usage: Whenever we need to show the cumulative output by avoiding duplicates, we can go for UNION. 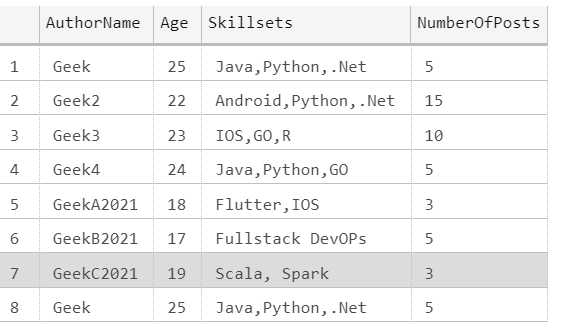 If you check the output, in 1st and eighth-row, retrieved column values are identical. Since we have used “Union ALL” the result is from both the tables including duplicates

Important Note to be considered while applying “UNION” and “UNION ALL”

This Construct provides the commonly occurring records between two select queries. This is the opposite of UNION. UNION removes the duplicate and shows all the records, but INTERSECT shows only the common records. So, whenever there is a scenario of showing common records, we can use INTERSECT

While comparing both Author and Author2021 table contents, for the fieldnames like AuthorName, Age, Skillsets, NumberOfPosts, only above shown data is common and hence in the output, we are seeing this.

By using UNION, UNION ALL, EXCEPT, and INTERSECT, we can compare two queries and get the necessary output as per our requirement. Given examples are simple to follow, we can have complex queries and can apply the mentioned constructs in them and can compare.