Scrapy is a web scraping library that is used to scrape, parse and collect web data. Now once our spider has scraped the data then it decides whether to:

Hence for all these functions, we are having a pipelines.py file which is used to handle scraped data through various components (known as a class ) which are executed sequentially. In this article, we will be learning through the pipelines.py file, how it is used to collect the data scraped by scrapy using SQLite3 database language.

Initializing Directory and setting up the Project

Once you have created a scrapy project using pip installer, then the output of the project directory looks like the one given in the image. 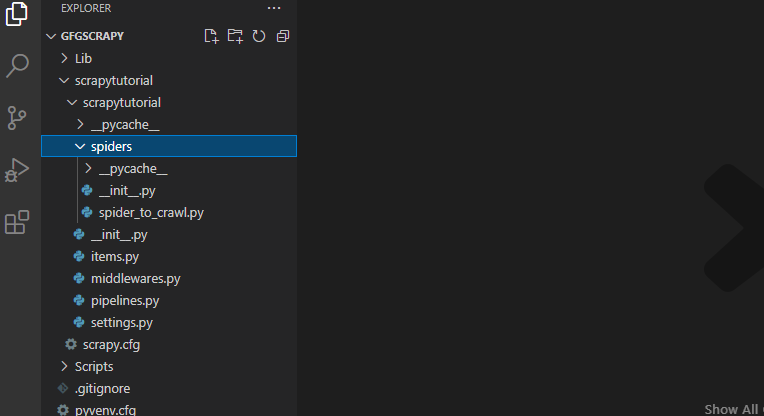 Since now we are ready with our project so now we can move on to see how pipelines.py file is implemented to store data scraped by the spider.

For performing different operations on items we have to declare a separated component( classes in the file) which consists of various methods, used for performing operations. The pipelines file in default has a class named after the project name. We can also create our own classes to write what operations they have to perform. If any pipelines file consists of more than one class than we should mention their execution order explicitly.

Each component (class) must have one default function named process_item(), which is the default method that is always called inside the class or component of the pipelines file.

Apart from these, we can also define our own methods (such as init() etc) to do other tasks like creating a database to store data or writing code that converts data to other forms.

Now let us look at how pipelines.py works:

It is important to register all the component we created in items pipelines file in the settings.py file in the directory structure under the title ITEM_PIPELINES.

Creating Items to be passed over files

We will require this file to be imported into our spider_to_crawl.py file. Hence in this way, we can create items to be passed to the pipeline.Now we are clear with the idea of pipeline and how they work.

Now it’s time to learn how to implement SQLite3 to create databases and tables in python.

Hence in this way, we can store data in the database. To visualize the collected data we have to use SQLite online as by default our system has no method to open such type of file. If you have some helpers software installed then you don’t need this.

Now we are ready to move to the example. In this example, we will be using all the above techniques which we have learned and create a database of our scraped data. We will be using the above-mentioned site to scrape Quotes data and store it in our Database using SQLite3 in pipelines.py file. So we will use the idea of how to implement SQLite3 in python to create a pipeline that will receive data from spider scraping and will insert that data to the table in the database created. So let’s begin to write the code in the spider_to_crawl.py file. Here we are declaring our spider and giving the required URL as an input so that spider could scrape through it.

We are now adding the pipeline methods below which are to be written in the pipelines.py File so that the database will be created.

After this use the given command to scrape and collect the data.

After using the command “scrapy crawl spider_to_crawl”, the processing will take in the given manner:

Here the init() method is called which is called as a default method always in any python file. It then calls all other methods which are used to create a table and initialize the database.

Then process_item() method is used to call a method named putitemintable() which stores the data in database. Then after executing this method the reference is returned to the spider to pass other items to be operated.

Let’s see the output of the stored data after scraping the quotes.

Crawling of our spider 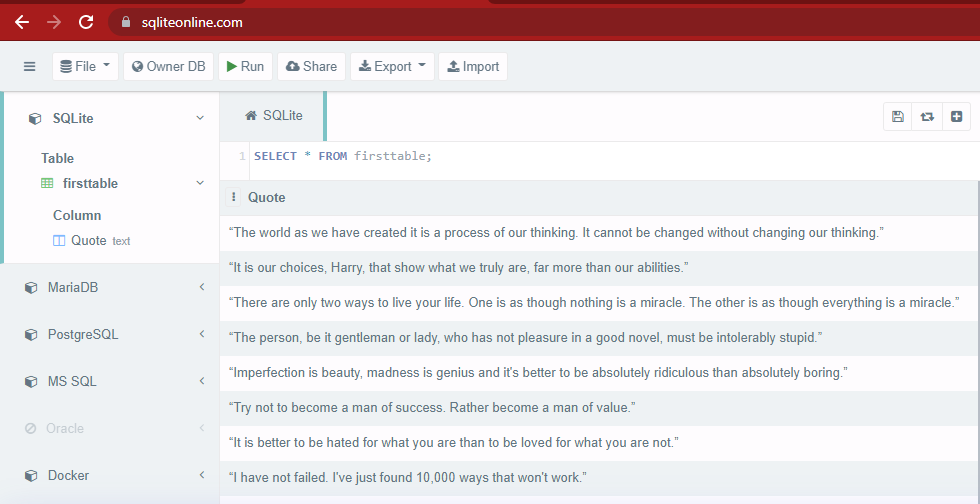 Data is stored in table.

Hence in this way we are able to collect the web data efficiently in a database.