The study of organic substances, which contain covalent bonds between carbon atoms, and their structures, characteristics, and reactions is known as organic chemistry. Their structural formula is determined by the study of structure. Physical and chemical parameters are studied, and chemical reactivity is assessed to comprehend behaviour. The chemical synthesis of natural goods, medications, and polymers, as well as the study of individual organic molecules in the lab and through theoretical (in silico) research, are all included in the study of organic reactions.

Group 14 of the Periodic Table contains the nonmetallic chemical element carbon (C). Although it makes up only around 0.025 per cent of the Earth’s crust, carbon is not particularly abundant in nature, but it produces more compounds than all the other elements put together. In 1961, the isotope carbon-12 was chosen to take the role of oxygen as the reference standard for determining the atomic weights of all other elements. Carbon-14, a radioactive isotope, is used in radiocarbon dating and radiolabeling. 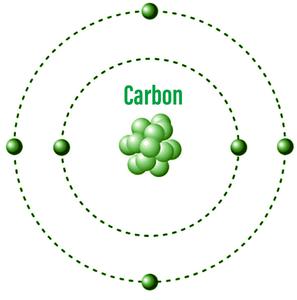 Since charcoal has the largest surface area of any carbon-containing substance, it is also the most reactive. Other, denser, less reactive forms include diamond, graphite, and coal.

Carbon creates patterns. It may bind to itself to form polymers, which are extremely durable long chains. A carbon atom has the ability to construct long chains with one, two, or three carbon atoms by creating up to four covalent connections. These chains could either be unbroken (straight) or branch out. A ring can develop when the two ends of a chain come into contact.

Due to their ability to join together, carbon atoms stand out among all other atoms found in nature. It is the characteristic that gives a carbon atom its special capacity to construct lengthy chains of carbon atoms by forming covalent bonds with other carbon atoms.

They create tetravalent bonds, in which one carbon atom joins forces with four additional carbon atoms. They have a repeating structure because this structure can be repeated indefinitely without affecting the stability of the bonds or the compounds created.

Chains can develop into branches, which then develop into sub-branch, which develop into rings, and so on. Currently, there are two categories of carbon compounds, the first of which is open-chain or aliphatic molecules.

Question 1: Where is carbon found in nature?

The following major sinks are where carbon is stored on Earth:

Question 2: Is Carbon present in our body?

Our bodies do contain carbon, after all, after oxygen, it is the second most prevalent element in the human body. Our body contains carbon to a degree of 18.5 percent.

Question 3: What is carbon used for?

Coal, which is mostly composed of carbon, is used as a fuel. Pencil tips, high-temperature crucibles, dry cells, electrodes, and lubricants are all made of graphite. Due to their extreme hardness, diamonds are also utilised in the manufacturing process for cutting, drilling, grinding, and polishing.

Question 4: Why Does Carbon Not Form Ionic Bonds?

It might pick up four electrons, creating a C–4 anion. However, the six-proton nucleus would have trouble retaining 10 electrons, or four extra electrons. A C+4 cation could arise if it loses four electrons. However, it would take a lot of energy to knock out four electrons, leaving a carbon cation with six protons in its nucleus and just two electrons remaining which is also not an ideal condition. Thus, carbon does not fond any ionic bond.

As a gas, CO2 won’t harm you because it is not toxic. It’s important to keep in mind that carbon dioxide is an essential component of the environment. CO2 drives the human respiratory system. Our health is only impacted when the percentage of CO2 rises after a particular level.