Given binary string str, the task is to build a DFA that accepts the string if the string either starts with “01” or ends with “01”.

DFA or Deterministic Finite Automata is a finite state machine that accepts a string(under some specific condition) if it reaches a final state, otherwise rejects it.
In DFA, there is no concept of memory, therefore we have to check the string character by character, beginning with the 0th character. The input set of characters for the problem is {0, 1}. For a DFA to be valid, there must a transition rule defined for each symbol of the input set at every state to a valid state. Therefore, the following steps are followed to design the DFA:

Step by Step Approach to design a DFA: 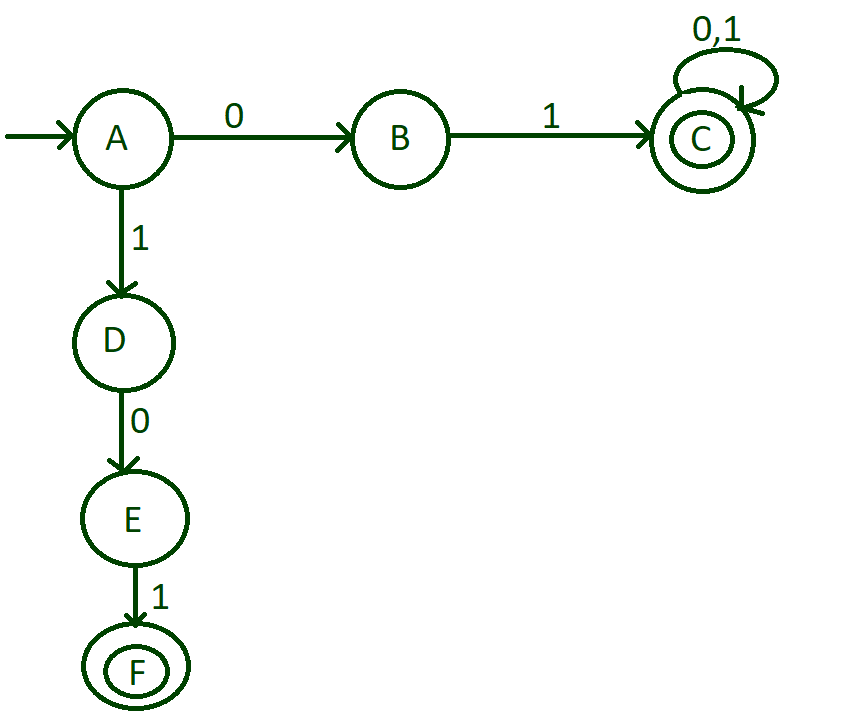 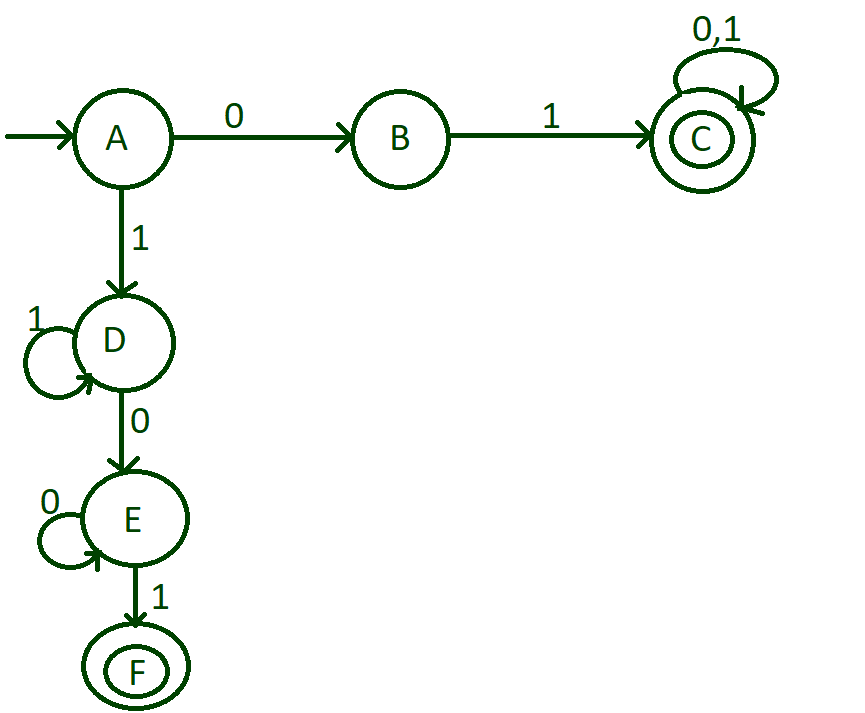 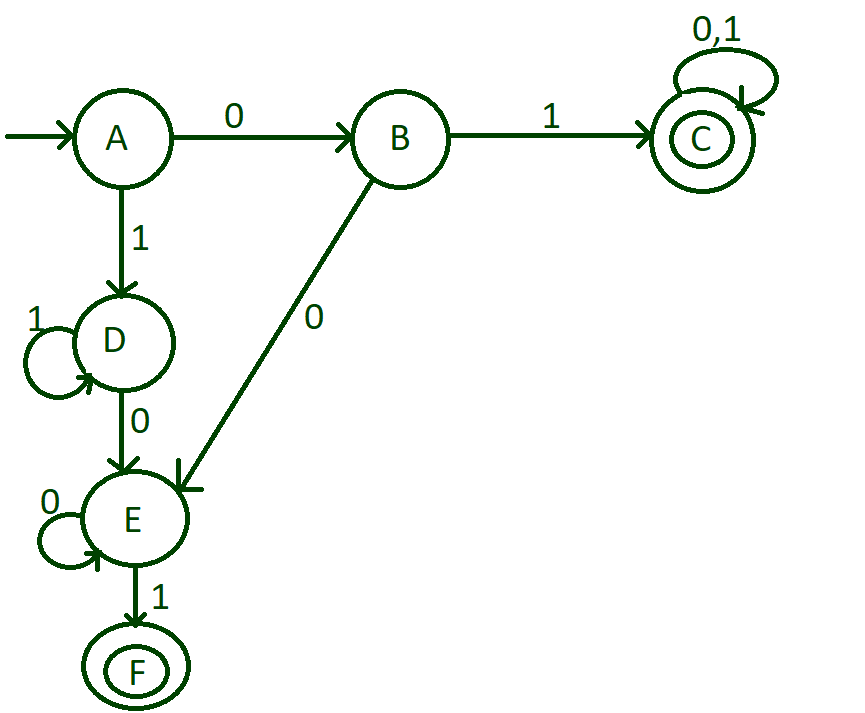 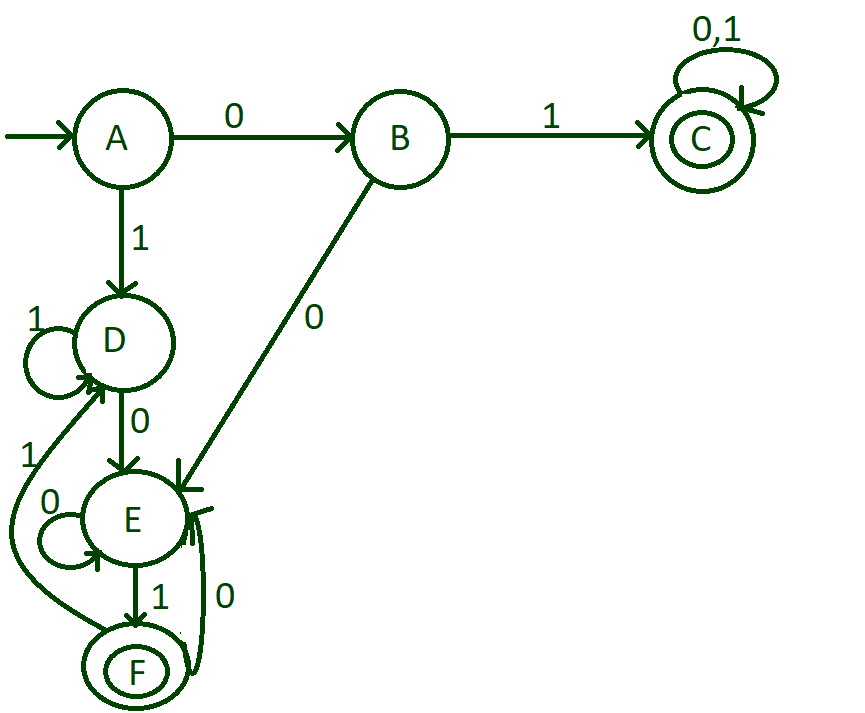 Transition table and Transition rules of the above DFA: 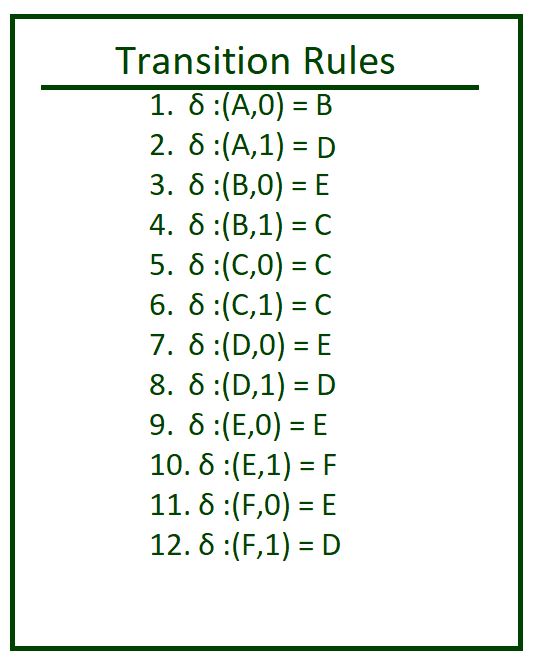 My Personal Notes arrow_drop_up
Recommended Articles
Page :
Program to build a DFA to accept strings that start and end with same character
14, Feb 20
Build a DFA to accept a binary string containing "01" i times and "1" 2j times
20, Jun 20
Program to build DFA that starts and end with 'a' from input (a, b)
25, Jan 18
Program to build a DFA that checks if a string ends with "01" or "10"
07, Feb 20
Number of strings which starts and ends with same character after rotations
21, May 20
NFA machines accepting all strings that ends or not ends with substring 'ab'
24, Jun 19
Count substrings that starts with character X and ends with character Y
14, Aug 18
Maximum length palindromic substring such that it starts and ends with given char
10, Jul 19
Longest substring that starts with X and ends with Y
09, Jul 20
Longest subsequence possible that starts and ends with 1 and filled with 0 in the middle
31, May 20
Find if a string starts and ends with another given string
23, Feb 18
Program to build a DFA that accepts strings starting and ending with different character
13, Feb 20
Program to construct a DFA which accept the language L = {anbm | n mod 2=0, m≥1}
12, Feb 19
Construct a DFA which accept the language L = {w | w ∈ {a,b}* and Na(w) mod 3 = Nb (w) mod 3}
24, Jun 19
Construct a DFA which accept the language L = {anbm | n > =1, (m) mod 3 = 1}
24, Jun 19
Program to build DFA that accepts the languages ending with "01" over the characters {0, 1}
02, Sep 20
Program to accept a Strings which contains all the Vowels
28, Feb 20
NFA to accept strings that has atleast one character occurring in a multiple of 3
05, Mar 20
Program to accept Strings starting with a Vowel
28, Feb 20
DFA for Strings not ending with "THE"
10, May 18
DFA for strings not containing consecutive two a's and starting with 'a'
15, Feb 19
DFA accepting all strings over w ∈(a,b)* which contains “aba” as a substring
07, Dec 20
Check whether the binary equivalent of a number ends with given string or not
30, Jun 20
Construct DFA which interpreted as binary number is divisible by 2, 3, 4
14, Jun 19
first_page Previous
Maximum difference of count of black and white vertices in a path containing vertex V
Next last_page
Minimum cost to colour a Tree with no 3 adjacent vertices having same colour
Article Contributed By :