Before going into the actual topic, first, we need to know about method overloading and type promotions.

What is Method Overloading?

When a class consists of more than one method with the same name but with different signatures and return types, then we call those overloaded methods, and the process is called method overloading.

What is Automatic Type Promotion?

In the above method call, we passed an integer as an argument, but no method accepts an integer in the below code. The Java compiler won’t throw an error because of the Automatic Type Promotion. The Integer is promoted to the available large size datatype, double.

Note:- This is important to remember is Automatic Type Promotion is only possible from small size datatype to higher size datatype but not from higher size to smaller size. i.e., integer to character is not possible. 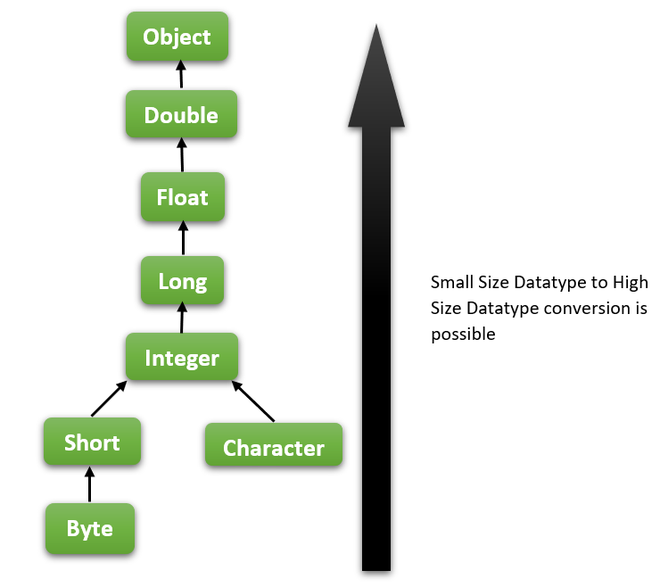 Example 1: In this example, we are testing the automatic type promotion from small size datatype to high size datatype.

Explanation: Here we passed an Integer as a parameter to a method and there is a method in the same class that accepts double as parameter but not Integer. In this case, the Java compiler performs automatic type promotion from int to double and calls the method.

Example 2: Let’s try to write a code to check whether the automatic type promotion happens from high size datatype to small size datatype.

Explanation: From this example, it is proven that Automatic Type Promotion is only applicable from small size datatype to big size datatype. As the double size is large when compared to integer so large size to small size conversion fails.

Example 3: In this example, we are going to look at the overloaded methods and how the automatic type of promotion is happening there.

Explanation: In the above code,

Example 4: In this example, consider the overloaded methods with more than one argument and observe how automatic type conversion is happening here:

Explanation: In the above code, when we pass arguments to a method call, the compiler will search for the corresponding method that accepts the same arguments. If present, then it will call that method. Else, it will look for scenarios for automatic type promotion.

These are the few examples that can give clear insight on Automatic type conversion in overloaded methods.