What are Saturated Hydrocarbons?

Saturated hydrocarbons, or alkanes, have the general formula CnH2n+2, where n is the number of carbon atoms in one molecule of the alkane.

What are Unsaturated Hydrocarbons?

An alkene is an unsaturated hydrocarbon with two carbon atoms connected by a double bond. Alkene has the general formula CnH2n, where n is the number of carbon atoms in one molecule.

An alkyne is an unsaturated hydrocarbon with two carbon atoms connected by a triple bond. Alkyne has the general formula CnH2n-2 where n is the number of carbon atoms in one molecule of the alkyne.

An alkyl group is formed when one hydrogen atom is removed from a saturated hydrocarbon (alkane). When this hydrogen is removed, the stem changes from -ane to -yl, indicating an alkyl group. Alkyl is a functional group of organic chemicals that is made up entirely of carbon and hydrogen atoms organized in a chain.

rocarbons are discussed further below.

Cycloalkanes are saturated hydrocarbons that contain only one ring. A cycloalkane is a cyclic hydrocarbon with single carbon-carbon bonds on all of its carbon atoms.

They have two fewer hydrogen atoms than an alkane with the same number of carbon atoms, with a general formula of CnH2n (n is an integer greater than 2). Cyclopropane (C3H6) is the simplest cycloalkane, with a three-carbon ring. Its extremely strained geometry makes it unstable and reactive, whereas cyclohexane (C6H12) is the most studied, best known, most important cycloalkane. Cycloalkane rings are commonly represented as polygons, with each corner corresponding to a carbon atom to which the required number of hydrogen atoms are attached to bring the total number of bonds to four.

The structural formula of cyclopropane

Cyclic hydrocarbons’ structural formulas can be represented in a number of ways, two of which are illustrated above. Each atom can be represented by the structure on the left in the diagram above. As shown in the triangle on the right, omitting the element symbols and only showing the shape is simple shorthand. The vertices of the triangle are thought to be carbon atoms. The most basic cycloalkane is cyclopropane and because of its highly strained geometry, it is quite unstable and reactive. Cyclohexane is a cycloalkane with six carbons. Larger cycloalkanes exist, but they are rare.

A cyclic hydrocarbon having at least one carbon-carbon triple bond is known as a cycloalkyne. Benzene is one of the most common cycloalkenes. A benzene molecule has six carbon atoms and six hydrogen atoms. There are three carbon-carbon double bonds and three carbon-carbon single bonds in this molecule. It also includes six single carbon-hydrogen bonds. Below are the structures of cyclohexene (C6H10) and benzene (C6H6). 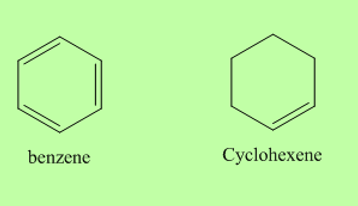 Cyclohexene (C6H10) is a flammable liquid with a distinctive odour. Due to the functionality of the double bond, which allows a wide range of chemistries to be applied and downstream intermediates and products to be derived from it, such as the epoxide, diol, and other useful downstream products, it is a reactive alkene that is used as a building block in several different markets.

Question 1: Cyclopropane is said to be very reactive. Why

Cyclopropane has an extremely strained geometry which makes it unstable and reactive.

Question 2: What are aromatic hydrocarbons?

The cyclic compounds which contain a single and a double bond at alternate positions and exhibit special properties are known as aromatic hydrocarbons.

Question 3: Identify which of the given compounds C5H10 and C6H6 is saturated cyclic hydrocarbons

Question 4: Give the formula of the alkyl group for the given compound C3H8.

Question 5: Is the general formula of saturated cyclic hydrocarbons similar to any simple hydrocarbons?