What is a Zero degree angle?

The approach for geometry can be observed from ancient times in their constructions from the use of various shapes in a very specific way. The term is originally derived from Greek words ‘ge’ and ‘materia’ which means earth and measurement respectively.

Geometry is a part of the development of the modern world. Modernized systems highly depend on geometry as it is used for designing, constructional works, architecture in choice of material for construction, and many more. It is also applicable in the technical background for computing various designs, manufacturing, creating blueprints, programming, etc.

Geometry is a branch of mathematics that deals with the study of shapes and their properties.

The given article is a study about angles, and their various types based on their measurements. The article also studies zero angles besides the five common angles.

Angles can be simply defined as is the space between two intersecting lines meeting at a certain point. They consist of two arms known as sides of the angle and a meeting point where angle forms called a vertex. Angles are measured in degrees which measures from 0° to 360°.

An Angle is a shape or space formed at the meeting point of two intersecting rays. The word angle is derived from the Latin word ‘angulus’ which means ‘a corner. The first angle was supposed by Carpus of Antioch.

Angles are divided into different types on the basis of measurement and rotation.

Angles on the basis of measurement:

Acute angle: The angle that measures less than 90° is the acute angle. The degree always measures between 0 and 90. Acute angles measure positive while the rotation is anticlockwise and negative when the rotation of angle is clockwise.

In the figure, O is the vertex of the angle, and OA and OB are two intersecting rays that meet at point O forming an angle less than 90°. Hence, ∠AOB is an acute angle. 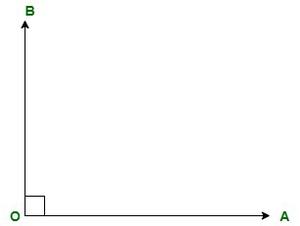 In the figure, O is the vertex of the angle, and OA and OB are two intersecting rays that meet at point O forming an angle of exactly 90°. Hence, ∠AOB is a right angle.

In the figure, O is the vertex of the angle, and OA and OB are two intersecting rays that meet at point O forming an angle of more than 90°. Hence, ∠AOB is an obtuse angle.

In the figure, of a straight angle, we can observe that O is the meeting point of two arms that is called vertex and OA and OB are two sides of the angle.

In the figure, O is the vertex of the angle, and OA and OB are two intersecting rays that meet at point O forming an angle of more than 180°. Hence, ∠AOB is a reflex angle.

Angles on the basis of rotation:

Positive angles: The angle that moves anticlockwise from its base and is drawn from the point (x, y) which is its origin is a positive angle.

Negative angles: The angle that moves clockwise from its base and is drawn from the point (-x, -y) which is its origin is a negative angle.

What is a Zero Angle?

An angle that does not form a vertex or measure 0 degrees is called a zero angle. It is also called zero radians. A zero angle is formed when both the rays or arms of the angle are pointing towards the same direction and vertex as just a point without any space.

Question 1: Give a real-life example of zero angles?

The sunset at the horizon is a real-life example of zero angles.

Yes, zero angle is an acute angle as the range of acute angle measures from 0 degrees to less than 90 degrees.

Question 3: What are the five types of angles?

The five different angles are

Question 4: Are zero angle and complete angle the same?

No, zero angle is an angle that measures 0 degrees, and a complete angle measures 360 degrees. Both of them have different measure of angles.