Improve Article
How to Upload Image into Database and Display it using PHP ?

Id should be in Auto incremented(AI). The image of created database is shown below: 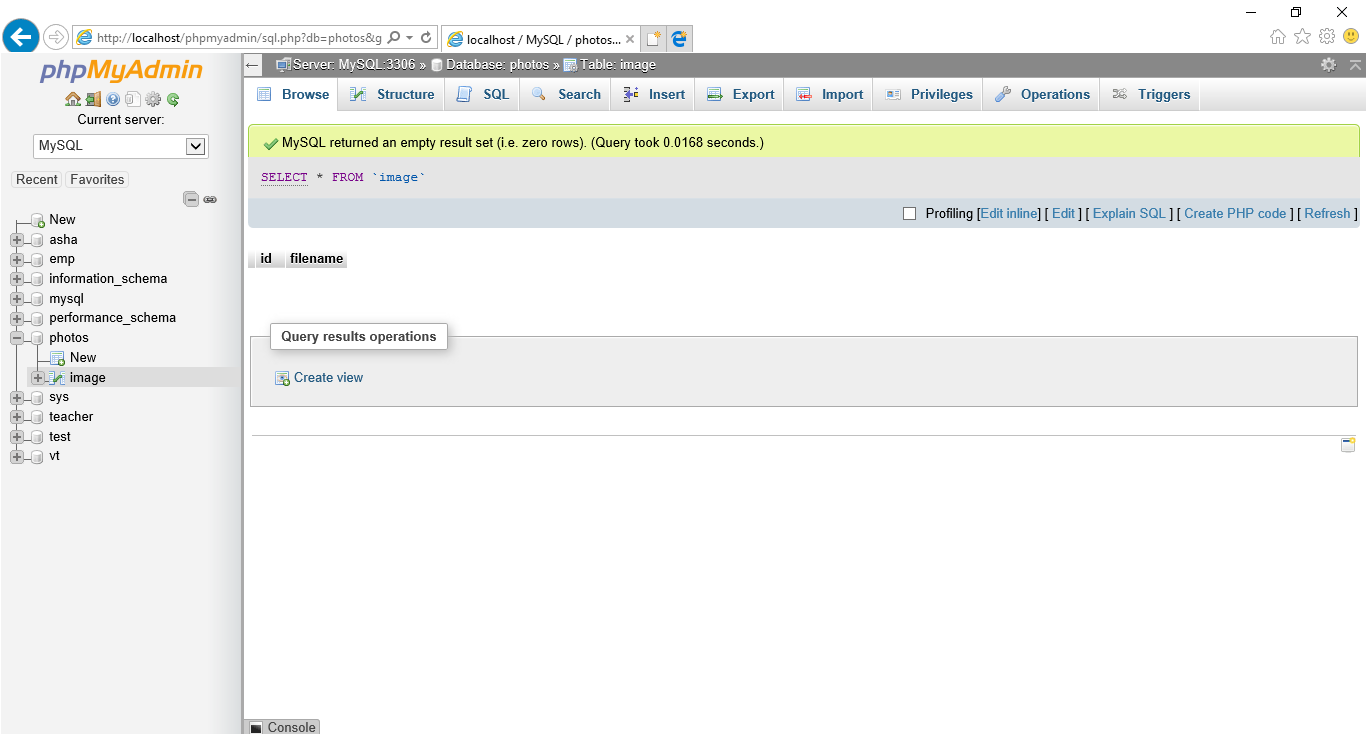 Program: Now, we will create a form for uploading images/videos files.

You can copy the above code and mention it into the main code directly or create a link as same in the HTML code and attached with the main code which is given below. As mentioned that if you link the stylesheet file you should create another file in .css format and saved it on the place where the main file to be saved. The form created with the help of POST method and the enctype=”multipart/form-data is the action which encoding the files and allow you to sent through POST.
Now we are work on the PHP code for the transfer of the image from any folder of the system in a particular folder which you are mention and store it into the database as a directory.

Combination of the above codes: And the final code of upload the image into MySQL using PHP is as followed.

Conclusion: The uploaded image into the database with the PHP code is having simple and using for various purposes. The code helps to upload the image and then uploaded the image into the database and can be shown in another folder.
One thing you should note that when you are run this program there should be a possibility that the image is not uploaded more than the 2 MB because the PHP program has set the default value of uploading an image of 2 MB and post the image of 8 MB. For exceeding the size of uploading the image you should follow the following steps:

My Personal Notes arrow_drop_up
Next
How to select and upload multiple files with HTML and PHP, using HTTP POST?
Recommended Articles
Page :
Upload and Retrieve Image on MongoDB using Mongoose
19, May 20
How to upload an image using HTML and JavaScript in firebase ?
12, Mar 21
Node.js | Image Upload, Processing and Resizing using Sharp package
10, Jun 20
How to fetch data from localserver database and display on HTML table using PHP ?
10, Jun 20
How to display a PDF as an image in React app using URL?
13, Aug 20
Display a Resized and Cropped Image using CSS
09, Apr 19
How to save an image to localStorage and display it on the next page?
14, Dec 20
Create a database on Relational Database Service (RDS) of Amazon Web Services(AWS)
02, Jul 18
Upload Progress Bar in PHP
17, Jul 19
File Upload in ElectronJS
14, May 20
How to upload images in MySQL using PHP PDO ?
19, May 21
Angular File Upload
31, Aug 20
Django - Upload files with FileSystemStorage
04, Jun 20
How to upload file without form using JavaScript ?
03, Nov 20
File Upload Vulnerability of Web Applications
31, Mar 21
ReactJS UI Ant Design Upload Component
01, Jun 21
How to upload files asynchronously using jQuery?
28, Mar 19
What is the difference between display: inline and display: inline-block in CSS?
22, Nov 18
How to Upload File using formidable module in Node.js ?
26, Apr 20
How to change the maximum upload file size in PHP ?
01, Feb 19
How to upload files using jQuery Dropzone Plugin ?
29, Jun 20
How to upload files in firebase storage using ReactJS ?
12, Apr 21
How to create a upload file button in ReactJS?
21, Jan 21
How to show upload or download percentage in ReactJS ?
11, Feb 21
Article Contributed By :