The existence of living beings is known to exist for millions of years now. We know that resources like coal and petroleum take billions of years to be formed as a result of natural processes. Coal and petroleum are further extracted by human effort to be used for the personal usage of mankind. In this article, we will be learning about fractions of Petroleum in this article. But before that, we should be familiar with the basic term i.e fossil fuels. So let’s understand that first:-

It is dark brownish to green coloured viscous liquid fossil fuel. It has a strong foul smell due to the presence of sulphur-containing compounds. It is commonly called crude oil. The economy of a nation depends to a great extent on petroleum wealth, that’s why petroleum is called black gold. Its name is derived from Latin words Petra (meaning rock) and O1eum (meaning oil). Thus, petroleum literally means “rock oil”.

Petroleum is a complex mixture of solid, liquid and hydrocarbons, mixed with saltwater and earthy particles. It is always found trapped between two impervious rocks.

It is believed that petroleum is formed by the anaerobic decomposition of extremely small sea animals and plants which got buried in the sea bed millions of years ago. Let us see how this happened. Petroleum occurs at a moderate depth (500 m to 200 m) between the 2 layers of impervious rocks. The petroleum is lighter than It water & hence, floats over it. Natural gas is found above petroleum, trapped between the rock cap & petroleum layer.

Petroleum is a mixture of several hydrocarbons. It also contains water, salt and rocky materials. It cannot be used in this made form either as a fuel or a basic material to produce other useful components. Before being put to use, it has to be purified or refined. The process of separating the various components of petroleum from one another is known as the refining of petroleum. This is done by a process called fractional distillation which is based on the fact that the different components of petroleum have distinctly different boiling points. In fractional distillation, crude petroleum is heated to a temperature of, 400°C or slightly above in a furnace. 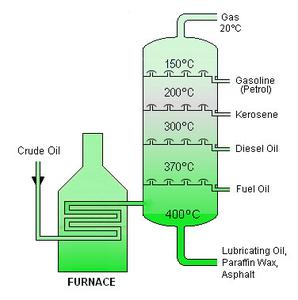 From the refining process, we get the three most important fractions of petroleum which are as follows:

Petroleum gas is a flammable mixture of hydrocarbon gases Liquefied Petroleum Gas is used in heating appliances and even in cooking types of equipment. It is also used as a refrigerant, replacing chlorofluorocarbons in an effort to reduce damage to the ozone layer.

LPG is formed from refining petroleum. It is being manufactured during the refining of petroleum (crude oil) or extracted from petroleum or natural gas streams as they emerge from the ground. It has a very wide variety of uses, mainly used for cylinders across many different markets as an efficient fuel container in the agricultural, recreation, hospitality, industrial etc. It can serve as fuel for cooking, central heating and water heating and is a particularly cost-effective and efficient way to heat off-grid homes.

Billions of years ago, animals and plants lived near to seas. After dying, the dead bodies got buried. Over the next billions of years under high pressure and high temperature, the organic matter transformed into what we know today as Petroleum or simply Petrol.

It is derived from petroleum. Kerosene is a combustible liquid. The name “Kerosene”  is derived from the  Greek word “Keros” meaning Wax. It is used as fuel for stoves, lamps and for jet aircraft.

It is often spelt as kerosine in scientific and industrial usage. Kerosene smoke contains high levels of harmful particles, and household use of kerosene results in higher risks of cancer, respiratory infections, asthma and many more. It is obtained from the fractional distillation of petroleum between 150 and 275 °C.

It can be also used to prevent air from re-dissolving in a boiled liquid and to store highly reactive metals like potassium, sodium etc.

Question 1: Describe how coal is formed from dead vegetation. What is this process called?

About 300 million years ago the earth had dense forests in low lying wetland areas. Due to various natural processes, like flooding and earthquakes, these forests got buried under the soil. The solid deposits layer by layer over them were compressed. Under high temperature and pressure, the plants got converted to coal slowly. This process is called carbonisation.

Petrochemicals are the substances obtained from petroleum and natural gas. They are used in the manufacture of detergents, fibres, polythene, etc.

Peat, lignite, bituminous, anthracite are the four varieties of coal.

Question 4: What is the full form of CNG?

Question 5: Name two places in India where coal is found.

There are basically 69 major coalfields located in the peninsula of India and 17 are located in the northeastern region. The bulk of the coal reserves are in the southeastern quadrant in West Bengal, Jharkhand, Orissa, Chhattisgarh & Madhya Pradesh.

Question 6: Which are the two main techniques of mining?

Primarily, there are two types of mining methods being used for the extraction of minerals and ores – surface/opencast mining and underground mining.