A number refers to a word or symbol which represents a specific quantity. It is with the assistance of numbers only that multiple arithmetic operations are performed and that we are ready to develop a lot within the field of physics and arithmetic. One cannot live their life without the usage of numbers, even for the foremost basic chores or tasks. Even the cash exchanged for commodities may be a certain value represented by numbers. A bunch of numbers grouped together is employed to assign an individual as their contact number, such is that the prominence of numerals in our lives.

Such numbers which include both rational numbers and their irrational counterparts are called real numbers. They are based on the concept of a number line, with zero being the origin and all the numbers to its right, positive, and those in the left of the origin, negative.

is an imaginary number, since it depicts the number 100, which is a perfect square as a negative number under a square root. Such numbers are not tangible, but still kind of real in the sense that they are used in mathematics. In other words, imaginary numbers are numbers that are the opposite of real numbers. They are not based on the concept of the number line, and as a result, cannot be depicted or plotted on one. Another way of defining an imaginary number could be such a number which yields a negative result when multiplied with itself, i.e., squared.

Representing an Imaginary Number Without the Square Root Part

An imaginary number, when written without using the root arithmetic expression can be written as a real number, multiplied by an iota, depicted i, which is an imaginary unit and iota (i) = √(-1).

can be written as

Following this pattern, one can conclude that i repeats its values after every 4th power. 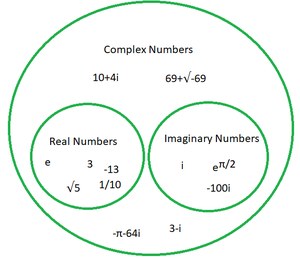 Standard Form of a Complex Number

Find the real and imaginary parts of the complex number z = e2 + 4i.

Hence the real part = ex cos y and the imaginary part = ex isiny.

Question 4: Find the real and imaginary parts of the number q if q ∈ R.

q ∈ R, q is a real number, implying that it does not have any imaginary part. Alternatively one can say that the coefficient of i is zero.

Hence the real part and the imaginary part of q for all q ∈ R are q and zero respectively.