An arithmetic Sequence can be defined as a sequence of numbers that are in some kind of order or following a pattern. In an Arithmetic sequence, there is some common difference between any two adjacent numbers and that difference is the key of that sequence. Let’s understand with an example, Sequence: 100, 200, 300, 400, 500, 600.

So now that the common difference d is known, every number in the sequence can be found by following pattern as,

So by following the pattern we can write a general sequence as:

an = nth term of the sequence

So arithmetic mean of these values can be calculated as,

Mean = (Sum of all values)/Total number of values 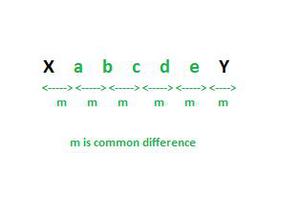 As known that the resulting sequence is an Arithmetic Progression. So, the formula for finding the nth term in the sequence:

an = nth term in the sequence

a1 = first term in the sequence

Now to insert 5 Arithmetic means we use the following method:

Find the common difference d (In above image it is m)

It is clear that if adding common difference m in X will give a,

Question 1: Insert 5 Arithmetic Mean between 5 and 23.

Question 2: Insert 5 Arithmetic Mean between 20 and 8.