The word “cooperative” means to work together and cooperate with each other, similarly, in a cooperative society, a group of people forms a voluntary association to benefit the members and work for the betterment of society, especially for the weaker sections. The members of a cooperative society raise the capital through the issue of shares, and the members themselves purchase those shares. The main aim is to protect the economic interest of the people by eliminating the middlemen. One of its major functions includes providing loans at a low rate of interest to its members and weaker sections of society. 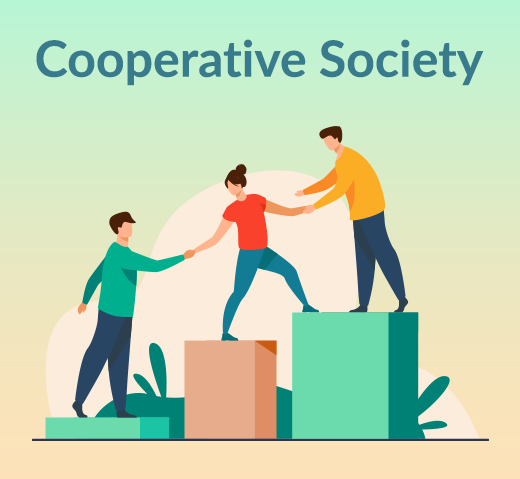 A cooperative society works with the aim of self-help basically for its members. It requires the agreement of at least ten adult members to form a society. For the smooth functioning of a cooperative society, an act was formed, and each cooperative society is governed by the rules and regulation of the act called “The Cooperatives Societies Act 1912”. After successfully registering a Cooperative Society under the said Act, it acquires a distinct legal entity.

According to “The Cooperative Societies Act 1912” – Cooperative organization is “a society which has its objective for the promotion of economic interests of its members in accordance with cooperative principles.

As registration of a Cooperative Society is compulsory, it has a separate legal entity that is distinct from its members. After registration, a cooperative society can hold property in its name and can enter into contracts, can sue, and be sued by others. All the transactions taking place in a cooperative society will be under the name of the society and not in the name of its members. As it holds a separate legal identity, it is not affected by the entry or exit of its members.

A cooperative society is a voluntary association; therefore, an individual is free to join or leave the society according to their will. It works according to a democratic society, i.e., it is open to all irrespective of their caste religion and gender.

A cooperative society works for the economic welfare of poor or weaker sections of society. Its main aim is to eliminate middlemen and protect the interest of its members and society. Hence, it can be said that a cooperative society works for a service motive. If any surplus is left, then it is distributed amongst its members as a dividend according to the rules and procedures of the society.

The risk factor of members is limited to the extent of capital brought by them in the cooperative society. In case of insolvency or dissolution, the personal assets of the members are not liable for repayment of debts, which makes the members of a cooperative society feel safe and protects their economic interests.

As the cooperative society holds the position of a separate legal entity, it is not affected by the death, retirement, or admission of any member. A cooperative society is not much affected by its members as they have to work on the basis of the rules and regulations provided in the act. Even though members have a voting right in choosing the managing committee member, it does not have much effect on the working of the business.

Each member in a cooperative society has one vote to elect the member of the managing committee, as it follows the principle of ‘ONE MAN ONE VOTE’. Every member has an equal voting right, no matter whether they have contributed less or huge capital to the business. Having a say in the matters of the business also puts a great emphasis on them. Besides, a cooperative society is a democratic association, which means that it treats everyone the same irrespective of their caste, gender, or creed.

5. Support from the Government

As a cooperative society works majorly for the benefit of poor and weaker sections of the society, it gets great support from the government in the form of low taxes, subsidies, loans with low rates of interest, etc.

As the members of a cooperative society belong to different cultural and social aspects their thinking varies, which leads to a greater possibility of conflicts. Members try to make personal gains and keep aside the service motive, which hampers the working of a cooperative society. In other words, the difference in personal motive and social motive of the members of the society results in conflicts among them affecting the overall business.

As there are different members in a cooperative society, it is difficult to maintain a level of secrecy. Every decision is taken in a meeting with an open discussion, which makes it difficult to maintain confidentiality about the operations of the business. Besides, a cooperative society has an obligation to disclose the decisions of the meeting under the Societies Act (7).

It is difficult for the cooperative society to earn and make a profit on a large scale because it works for welfare motive. The amount of profit earned by the society is not sufficient to appoint skilled and experienced members for proper management. Even if any of the members agree to give honorary services to the cooperative societies, they do not have sufficient means to handle it well.

Each member brings limited capital and expects a higher return, which is difficult for a cooperative society to provide at an early stage. Moreover, it is formed for the welfare of society and its members; therefore, the profit motive is ignored to some extent. 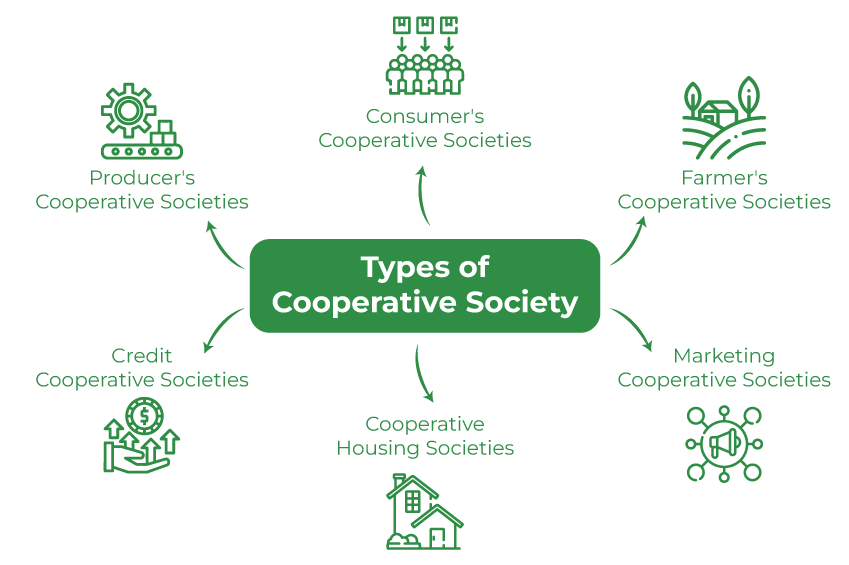 Many small producers want to produce on a large scale, but they lack in monetary terms and cannot meet their goals. The Producer’s Cooperative Society works for those producers who want to sell products on a large scale, but do not have the required resources. In Producers’ Cooperative Societies, the members are the producers and they collectively produce the goods and meet the demands of consumers. This society is formed to fight against the capitalist section of society, which has large capital and a lot of resources. It works as a supplier and as a buyer for raw materials, overheads and other equipment. Generally, profit is distributed amongst the members according to their investment in the resources.

Such societies are formed for the welfare of consumers, and it comprises those members who are willing to pay reasonable prices for good quality products. It purchases products directly from the wholesalers, eliminates the middlemen, and sells the goods directly to the consumers. If there is any profit from the sales, it is distributed amongst the members according to their capital contribution or purchases made by each of the members. In simple terms, a consumer’s cooperative society protects the interests of consumers.

The farmers, who are willing to produce on a large scale, form a cooperative society and jointly take up the farming activities. Anything produced in bulk would cost less. The main aim of a Farmer’s Cooperative Society is to earn a profit by increasing productivity through less cost. When different farmers join together, they get an opportunity to combine their land, which solves the problem of fragmented landholdings. These societies focus on modern methods of farming, HYV seeds, fertilizers, machinery, and other modern equipment, which help in improving the yields and return.

Cooperative Housing Society works for those who want to construct houses for themselves, but do not have the required money for such construction and procurement. It offers the members to pay the amount in installments and provide them with the desired plot or land on which the members could construct the house according to their choice. There are different types of housing societies, some build new houses, some are formed to buy existing properties, and others upgrade houses and infrastructure.

A Marketing Cooperative Society consists of producers who want to get a reasonable amount for their produce. Therefore, this society helps these small producers by pooling the amount contributed by each of the members and performing functions like warehousing, packaging, transportation, etc. The major aim of a marketing cooperative society is to remove the middlemen from the chain of distribution and improve the competitive position of the producer members. The profits earned through the sale of these products are distributed among the members of the society as per the amount contributed by them to the pool of output.