There is no doubt that C is faster than Python then how do Python library like Numpy perform huge number crunching job so fast and efficiently? Actually, libraries like Numpy are not completely written in Python instead, some parts of the library are written in C which provides performance boost. After writing code in C, we wrap them in Python code which acts like an interface for those C codes. We can then call C functions using Python syntax where actual processing is done in C behind the scene and the result is returned back as Python object. In this article, we will see how to create Python wrapper for our C program on Linux systems using a software called SWIG.

In a nutshell, SWIG is a compiler that takes C/C++ declarations and creates a wrapper needed to access those declarations from other languages like Python, Tcl, Ruby etc.
It normally required no changes in existing code and create an interface within a minute.

In many occasions we need wrappers, following are few of them –

Consider this piece of C code, having two functions and one global variable –

Here is our header file gfg.h –

First, we have to create a SWIG Interface file. This file contains ANSI C function prototypes and variable declaration. Here –

Now we will create wrapper code using the command like $ swig -target_language interface_file.i

After executing this command a wrapper code with name “gfg_wrap.c” is created. This files contains a bloated version of our original C code with various error handling code etc. Another file “gfg.py” is generated which is the module we will import in our python script.

After this, we have to generate position-independent code which will be used in shared library by compiling “gfg_wrap.c” and “gfg.c” using the following command –

Replace python2.7 with your Python version. This will generate two object files
“gfg_wrap.o” and “gfg.o”. In above command –

Note: If you get error something like “… ‘Python.h’ file not found” then following might be possible causes –

To get ‘Python.h’ You must install Python-dev using following command –

To find the correct path of ‘Python.h’ execute following command – 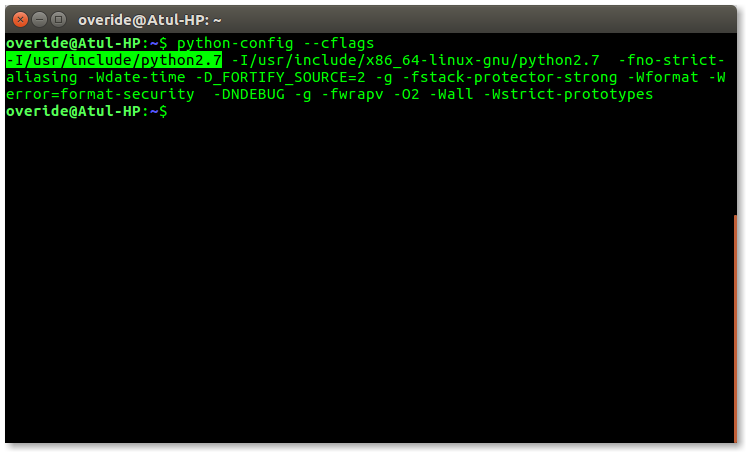 Now replace the path in compilation command with this one for python2.7 or change the version as python3.5 for Python 3.5.

Now, at last, we have to link generated objects files together to create a shared object which is analogous to dll files in windows. Use the following command, this will generate a “_gfg.so” shared object file –

Now we are ready to test out python wrapper by importing it. Make sure you are in directory having this wrapper file.

Instead of typing in commands and figuring out what compilation options are needed to compile files, we can automate this using distutils. Create a setup.py as below – 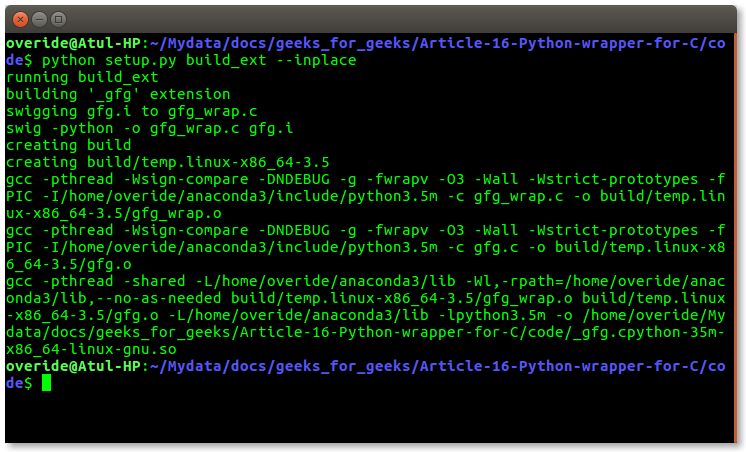 Obviously, SWIG is not the only way for creating wrappers, one can consider following alternatives based on their requirements –

In next article, we will see how to create wrapper for C++ code (OPP)