Working With Different Versions of an R Package

R’s package system is set by default to overwrite the existing versions of packages so that the user always has the latest version. Hence, any update will overwrite the previous version. So if you want to use two versions of the package, you have to install it in a different location and have to accordingly import it by specifying that location.

To check the packages installed, use this command:

It returns information about all the packages installed like the version, the path of installation, dependencies on the version of R, other imports needed by the package.

Sometimes there can be drastic changes in the latest version of the software which makes the user revert to the previous versions. Some functions may be deprecated, classes removed, parameters of functions altered which can be troublesome for existing users working with earlier versions. So a user may want to install an outdated version for a particular function and then revert to an existing library.

This function installs the package at the location lib specified by the user. This function may not work due to the lack of an appropriate toolchain for building/compiling packages. By default, R for Windows installs the precompiled “binary packages” from CRAN. CRAN archives the package sources and not the binaries which we need to install. Hence, Rtools is required to build and compile libraries.

‘versions’ package on CRAN relies on Revolution Analytics MRAN server to install packages for specific versions without the need to install Rtools for installing binary packages but this will work going back to date when MRAN was released, that is near to 2014-09-17.

Download and install the latest versions of packages hosted on CRAN as of a specific date from the MRAN server.

Download and install named versions of packages hosted on CRAN from the MRAN server.

If you already have a version of the package, and you want to install another version, you have to change the path of the directory where R stores libraries. R will overwrite the previous installation of the same library even if the version is different.

R searches the active library path to find the installation of the requested package. As both versions of a package are installed in different locations, the library function can still load the package by specifying the location of that package.

By default, lib.loc = NULL which means R will search for packages in its default library path.

The following example illustrates how to use different versions of package.

Working with packrat or renv

Any install, upgrade or changes in an R session brings about a change in R directory which is shared across all R sessions. Different projects may need different packages and thus there can be a lot of different package dependencies. Hence, we might change some functionalities which are shared in the global environment thereby affecting all other sessions. So we need a ‘Virtual Environment‘ like python to manage these conflicting dependencies. Hence, the idea of project-local libraries is born.

‘Packrat‘ and ‘renv‘ are packages available in R for these purpose. renv is the successor of packrat. These packages help to isolate different projects, so that one project won’t affect another by providing every project its own private package library, making the projects portable so that it is easy to install packages your project depends on and reproducing the exact package versions a project needs.

Renv is a dependency management toolkit for R. Using ‘renv’, you can create and manage project-local R libraries, save the state of these libraries and later restore your library as required. Together, these tools can help make your projects more isolated, portable, and reproducible.

If you have picked up doing some project, before actually working on a project you have to solve version control issues; find the correct versions of packages to use or have to deal with dependencies. Renv provides cleaner and simpler way of doing this. Renv solves package management but does not deal with different versions of R. The workflow for using renv:

Discovers packages used within the current project, and then initializes a project-local private R library with those packages. The currently installed versions of any packages in use (as detected within the default R libraries) are then installed to the project’s private library.

To start a new project and initialize renv in it, use the project argument to specify the location of the project directory.

This will set up a project-local environment with a private library, and also make sure to install all the packages you’re using into that library.  You will get all your packages and version dependencies discovered and stored in a file called renv.lock.  Renv will also write to files in the active project directory including the lockfile and the folder ‘renv’ in the project directory which contains private libraries and activation scripts to load the project.

Run .libPaths() to check the library paths for the project with renv initialized in it. 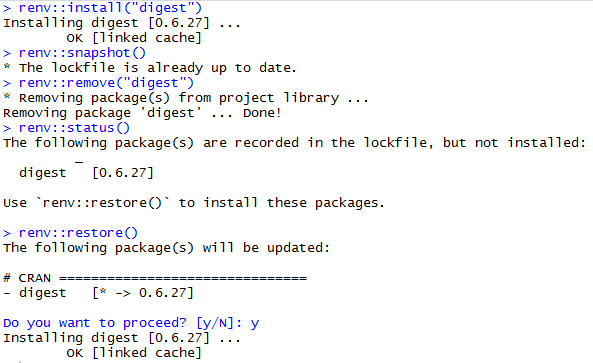 The following program demonstrates how to configure renv settings like enabling or disabling automatic snapshots while working in project directory.

My Personal Notes arrow_drop_up
Previous
Storm Breaker - Social Engineering Tool in Linux
Next
Python program to a Sort Matrix by index-value equality count
Recommended Articles
Page :
Using Synaptic Package Manager to Download a Package in Linux
30, Jan 21
Java Program to Create a Package to Access the Member of External Class and Same Package
08, Apr 21
tidyr Package in R Programming
24, Jul 20
Package Management in Julia
30, Jul 20
Scala | Package Objects
29, Apr 19
Chained Package Clauses in Scala
01, May 19
Rank variable by group using Dplyr package in R
13, Oct 21
How to update dependency in package.json file ?
27, Feb 20
UNIVERSAL Package in Perl Programming
18, Jun 20
How to Create a Package in Java?
18, Jan 21
How to find the version of an installed npm package in node.js ?
29, Jan 21
How to automatically build the package.json file for Node.js projects?
29, Jan 21
How to install an npm package directly from GitHub ?
15, Feb 21
How to define the required Node.js version in package.json?
04, Feb 21
Flutter - Provider Package
28, Jan 21
Protected vs Package Access Modifiers in Java
24, Mar 21
sysget - Front-End For Every Package Manager in Linux
23, Mar 21
Public vs Protected vs Package vs Private Access Modifier in Java
16, Apr 21
How to Install a Package in R ?
15, Apr 21
Public vs Package Access Modifiers in Java
16, Apr 21
Package vs Private Access Modifiers in Java
17, Apr 21
How to disable Messages when Loading a Package in R ?
14, May 21
How to Build a Python package?
27, May 21
Draw Multiple Overlaid Histograms with ggplot2 Package in R
16, Jun 21
Article Contributed By : 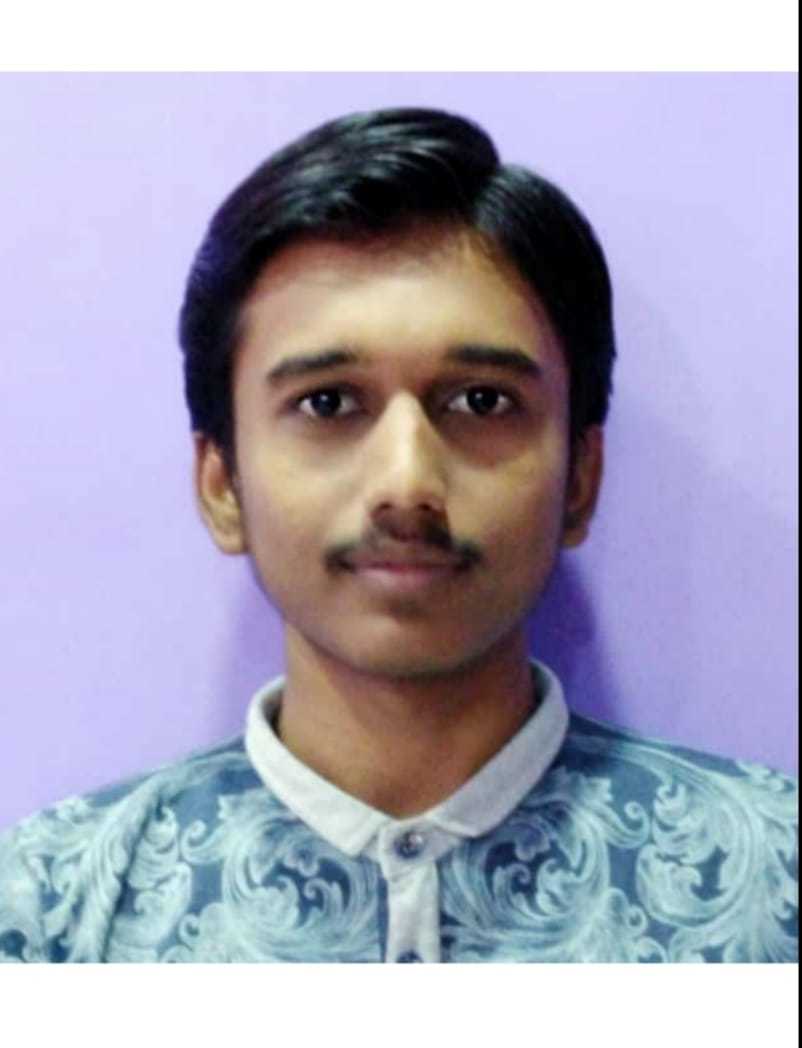