Git provides various tools and applications to perform better handling of the work environment. Git is a type of version control system that is used to allow more than one developer to access the source code of a specific application and can modify changes to it that may be seen by other developers. BitBucket is a git-based tool that helps with collaborations on large projects across various teams and helps keep a track of different versions of a project that can access it from your local machine. It is specially designed for teams to collaborate on large projects in big enterprises. It is also used for automated testing and deployment of code. Since this is a git-based tool, you need to have git in your system to work with Bitbucket.

Let’s suppose many developers are developing a project that is divided between various teams and will work on different versions during and after development. For this kind of project, Bitbucket is the best option for individuals or teams.

Now you might be wondering that what is the difference between Github and Bitbucket?

Note Another way to create a repository and clone it is using the source tree in BitBucket.

Now’s let’s see how we can work with the Bitbucket using git. It’s pretty simple. You will need to create a repository first. Visit the link below and create an account at Bitbucket. After you have created your account, you will see a button “create repository” in the center of the screen, click it and create a repository. You can choose the repository to be private or public. public repositories are accessible to everyone while private is only accessible to you. Now we will get started with the Bitbucket.

We will need to clone the project folder into your local machine, which can be done in a few steps as shown below with visual aids

Step 1: Clone the repository into your local machine

Click on the “clone” button on the right corner of the dashboard. A prompt with the URL link would appear. the URL link would look like “https://USERNAME@bitbucket.org/USERNAME/REPOSITORY_NAME.git”. You can clone using either https or ssh links. 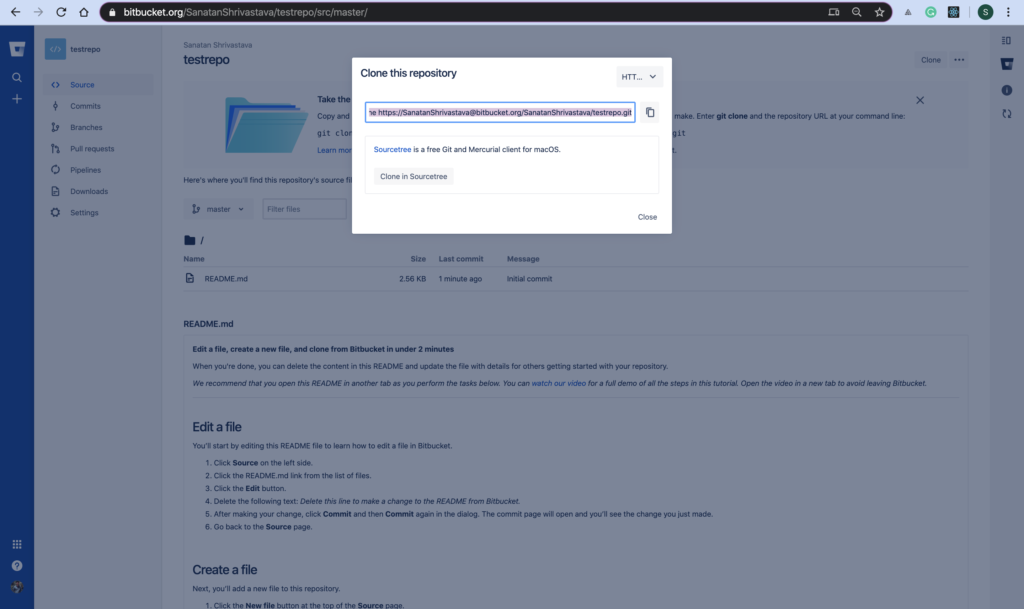 Step 2: Copy and paste the link in the terminal after typing git clone.

Use the following commands to clone your repository as provided below as follows:

Now, we need to know what does clone means? Clone means, it will retrieve all the contents from that directory to your local machine where you are working, without affecting the Bitbucket repository, until you edit it from the terminal. Using git clone would add the folder to your local machine.

Step 3: Check your progress by typing “git status” command into the terminal

Step 4: Creating and adding a file to your Bitbucket repository

Now, let’s suppose you want to create and add a file to your Bitbucket Repository. Type in the commands below in the terminal.

The file is now added and is ready to be committed and pushed on your Bitbucket repository.

If there are some changes made to your repository. You can use the git pull command to restore them to your local machine.

Any of the three commands would restore the changes into your folder in the local machine.

As discussed, since this is a tool for working across separate branches, let’s learn how to create, and delete a new branch, and how to switch across branches.

To create a branch, type in the terminal

To switch the branch, use the command git checkout:

Finally, to merge your branch with the master branch, use the command git merge to merge the two branches.

Step 7: To delete a branch, use git branch -d to delete the branch.

In case you have an existing project, switch the current directory to that existing repository in the Terminal or CMD. Then type in the commands below in the terminal or CMD.