Ever wondered how different layers of network work together to send a message. Lets understand some basic terms before getting into details.

Generally a host or a computer has all layers (from application layer to physical layer ) and a router has network, data link layer and a physical layer.

Now lets understand the working of different layers with the help of an example. 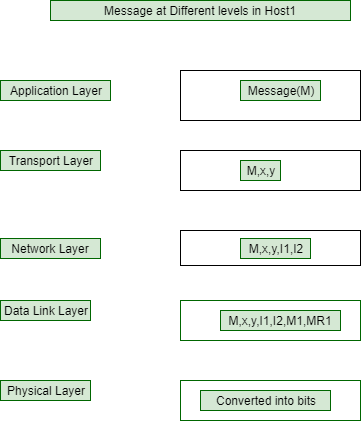 Network layer sees the destination Ip address and since the destination is not present in its network it will decide it forward it router2. Network layer of router1 decides it after seeing the routing tables at router1 and will decide it.Now the DLL of router adds header to the message. This time the source mac address will be MR1 and destination MAC address will be MR2 (using Arp it finds out). In this way the receiver only knows the Ip address of source and it will never know the mac address of the source. Now the message will be (M,x,y,I1,I2,MR1,MR2) and it will be given to physical layer. The physical layer converts it to bits and sends it router2.

Now the network layer finds out that the host2 is in the network to which the router2 is connected so it will send the message to host2. Network layer finds out that host2 is in the same network after seeing the routing tables present at the router2.N ow the DLL will add the header information with mac address of router2 (sender) and M2(destination) (it finds out using ARP request). Now the message will be (M,x,y,I1,I2,MR2,M2) and will be given to physical layer which converts it to bits and sends it host2.

At Host2:
The physical layer will convert it into bits and will give the message to DLL. DLL sends an acknowledgment to DLL of router2 and removes the MAC address on the message, which will be given to NL. Now the network layer will remove the IP address and gives it Transport layer.

Now the transport layer will send an acknowledgment to Transport Layer of host1 (in case of TCP since it has the IP address of host1. The message will be (M,y,x,I2,I1)) and removes the port number and gives the message to the process(or application) present at y. 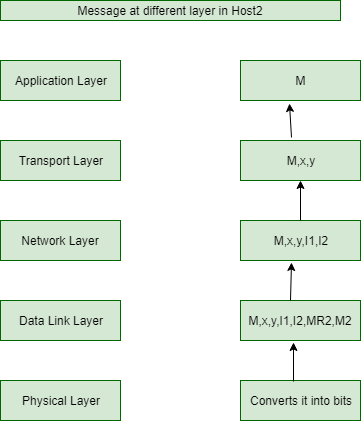 This is how the message from one host is delivered to another host on different network.