The concept “work” is commonly used in ordinary speech, and we understand that it refers to the act of accomplishing something. For example, you are currently improving your understanding of Physics by reading this article! However, Physics may disagree on this point. The Work-energy Theorem explains why this Physics of no work exists!

When an operating force displaces a particle, work is said to be done. There is no work done if there is no relocation. You may become fatigued if you stand for an extended period of time, but according to Physics, you have done no labor.

The work done on a system by a constant force is the product of the component of the force in the direction of motion times the distance through which the force acts. 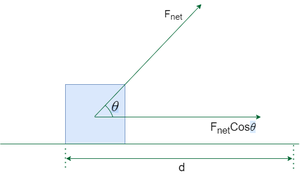 Work Done can be either Positive or Negative or even Zero.

There are many forms of energy as mentioned above, Here we mainly focus on Kinetic energy.

A Body of Mass M and moving with Velocity V 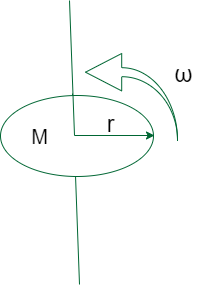 The statement of the Work energy theorem is,

The work W done by the net force on a particle equals the change in the particle’s kinetic energy KE.

where vi and vf are the speeds of the particle before and after the application of force, and m is the particle’s mass.

Let us will consider the case in which the resultant force F is constant in both magnitude and direction and is parallel to the velocity of the particle. The particle is moving with constant acceleration a, along a straight line. 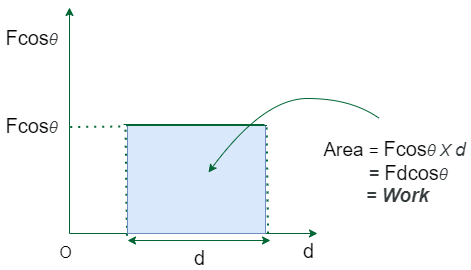 Work done by a constant force

The relationship between the net force and the acceleration is given by the equation F = ma (Newton’s second law), and the particle’s displacement d, can be determined from the equation,

The work of the net force is calculated as the product of its magnitude and the particle’s displacement (W=Fd).

Substituting the above equations yields: 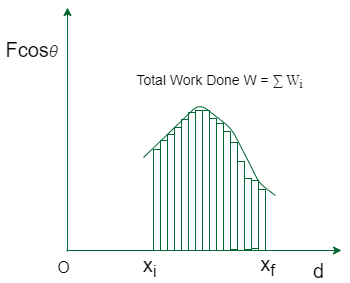 Work done by a variable force

As a definite integral of force over the net displacement, we can now define work as:

Because kinetic energy is equal to

The change in kinetic energy over time can be described as follows:

Acceleration, according to Newton’s second law of motion, is the change in velocity of an object with respect to time. As a result, the above equation can be rewritten as,

We can express the previous equation as, because F= ma and velocity is the rate of change of displacement over time.

When both sides of the equation’s time derivatives are removed, we get

By integrating the previous equation along the x-axis, we get,

or we can write,

The above equation is the proof of the work-energy theorem for the variable force.

Problem 1: A 2 kg ball is dropped from a height of 10 m. Calculate the work that has been done on the ball between the moment it is released and the moment when it hits the ground. Assume that air resistance can be neglected.

We must calculate the amount of work done on the ball as it hits the ground.

The ball is dropping freely here, conserving energy. We know that the difference in kinetic energy equals to the work done.

Because the ball is in a motionless condition when it is dropped, it has no kinetic energy at first.

All the ball’s potential energy is transformed to kinetic energy when the ball touches the ground.

So, Potential Energy of Ball at height hi is,

Now, The ball had 196 J of potential energy when it was released and 0 J of kinetic energy.

When the ball hit the ground, it had 0 J of potential energy and 196 J of kinetic energy.

Therefore, The net work done on the ball is 196 J.

Problem 2: A car of mass 500 kg traveling at a speed of 16 m/s applies the car’s brakes at some point. The car’s brakes provide a frictional force of 4000 N. Determine the stopping distance of the car.

Applying the work-energy theorem as:

The change in the kinetic energy is equal to the work done by the frictional force of the car’s brakes.

Therefore, Initial Kinetic energy of car at the moment brakes were applied is,

As the car is at rest, Final Kinetic energy =0, therefore

Then the work done is given by:

By work-energy theorem, The change in kinetic energy is equal to the work done.

Therefore, The stopping distance of car is 16 m.

Problem 3: On a rainy day, The driver of a car applied brakes seeing a red light. It is measured that the car stopped with 100 m skid mark behind it from the point of application of brakes, the coefficient of friction was estimated to be 0.45.  What was the speed of the car when the driver applied the brakes?

We know that, force of friction is the cause of the work done on car to slow it to a stop.  We also know that the work is equal to the change in kinetic energy.

Work is equal to the force times the displacement over which the force acted.

The force in this case is the force of friction. so, Ffriction = μFN

Since the car is on a level road the normal force is equal and opposite the force of gravity.

The force of gravity is equal to the mass times the acceleration due to gravity, FG=mg

Since the final velocity is 0 we get,

Problem 4: The net propulsion force of a 2000 kg rocket is 600 N. The rocket accelerates uniformly from an initial velocity of 50 m/s to a final velocity of 80 m/s in a short amount of time. Assume that the rocket’s mass remains constant while it burns fuel and that the net force is directed in the direction of motion. How much net work has been done on the rocket (in KJ)?

Initial Kinetic energy of the rocket KEi is given by:

Similarly, Final Kinetic energy of rocket KEf is given by,

Net Work done = The change in the kinetic energy at the two velocities:

Therefore, Net work done on the rocket is 3900 kJ.

Problem 5: A 100 g arrow is fired from a bow whose string exerts an average force of 150 N on the arrow over a distance of 50 cm. What is the speed of the arrow as it leaves the bow?

Work is equal to the force times the displacement over which the force acted.

Substituting the values, we get

Problem 6: Ronaldo kicked a football, and it traveled 50m with a constant velocity, how much work does Ronaldo do?

Work is the product of a net force over a given distance.

There must be a net force exerted and a non-zero displacement of the object in order for it to do work.

The displacement is provided, but we must solve for the force.

According to Newton’s Second Law of Motion, the football moves at a constant velocity, which means its acceleration is zero.

If the force is zero, then the work is also zero. Therefore, Work done, W is 0 J.

Problem 7: A 20 kg box is moving at 4 m/s. A net force of 100 N is constantly applied on the box in the direction of its movement until it has moved 25 m. What is the approximate final velocity of the box?

Substituting the value, we get,