The modern developments in everyday life, in terms of technology and the internet, are only made possible with the help of the TCP/IP suite.

TCP is been used for communication among devices on the network. It stands for Transmission Control Protocol. It can work with any type of network, whether personal networks or the internet. For instance, it can work with the extranet or intranet, etc.

In short, TCP simply determines the data transfer in the network. TCP works by breaking the data into small packets which can be transferred through network activity.

Here in this article, we will be discussing the importance of TCP in computer networking and the TCP connection establishment and termination. Mainly, we will discuss the Four-Way Handshake process, its importance, advantages, and disadvantages.

TCP is a connection-oriented protocol, which works in terms of full-duplex mode. So, the very first thing is that it requires a well-established logical connection between the devices so that data can be exchanged. Here the noticeable thing is that it can send data to both sides.

So, here are the main 3 steps, also known as TCP 3-way Handshake, which required to fully establish the TCP connection is given below:

Now, to understand the process clearly, here we will be discussing the further steps to establish the TCP connection down below:

To understand it you can also take a look at the given diagram below:

Here, to terminate an established TCP connection, the following 4 TCP packets are needed to be exchanged. Which you can understand with the statements below:

These 4 steps are known as a TCP 4-way handshake, which is necessary to terminate a TCP connection. For the termination of the established TCP connection, the following steps are necessary for the process. Which are given down below:

Since the Four main steps are required to close an active connection, so, it is called a four-way handshake. For a better understanding, you can take a look at the diagram below: 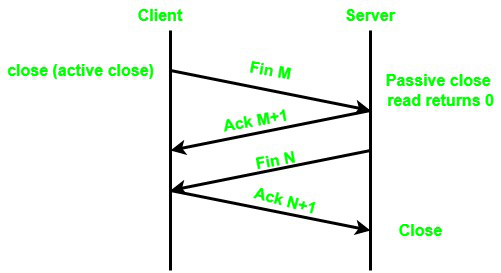 Now the question is, why termination can not send ACK and FIN packets at once? By which one step can be reduced. And why the four-way handshake is necessary here?

Well, by looking at it carefully, it can be seen that the four-way Handshake is actually a set of two-way handshakes. However, it is not completely false that in some cases, the 2 and 3 can be set at the same packet.

The four-way handshake works as a pair of two-way Handshakes. Where, the first phase is, when the client sends the FIN flag to the server, and in return, the server sends the ACK flag as acknowledgment.

This can be understood by the statement below:

At this point, the client is in the waiting state, it is waiting for the FIN flag from the server. So, that the connection can be terminated. This state can be mentioned as FIN_WAIT_2.

Now as we know that it works as the full-duplex mode, so if the one-side connection is broken down, then no more data can be sent from that side of the connection. But it can still receive the data from another side.

Here, the server can send more data when the Client is in the FIN_WAIT_2 state. And once the server is done sending data, then the server will send the FIN flag to the client as the termination request, and then the client sends the ACK flag as the confirmation to terminate the connection.

As you can see in the statement below:

So, as explained, in this case, steps 2 and 3 cannot be sent as one package, since they belong to two different states.

Now the other reason is that it can become difficult for both sides to define why the peer does not respond. Also, not only the offline state can cause a packet lost. Alongside, the other exceptions in the server’s processing can also lead to it. And there is another problem with this idea is that in this condition, the client will have to wait for a long time until the time is out. Here, the four-way handshake looks like a better and easier option to address these problems.

Here, some of the advantages of using TCP connections are given below:

Here are some of the downfalls of using TCP. Which is given below:

So far, we’ve talked about the role of TCP in computer networking. The process of establishing a network connection and terminating it via the Four-way handshake. In conclusion, despite its limitations, it is an efficient method of transferring data between networks.

My Personal Notes arrow_drop_up
Previous
Method of Variation of Parameters to Solve 2nd Order Differential Equations in MATLAB
Next
Primer CSS Marketing Buttons Sizes
Recommended Articles
Page :
TCP Connection Termination
18, Oct 17
TCP with explicit link failure notification (TCP-ELFN)
06, Jan 20
TCP Tahoe and TCP Reno
07, Feb 22
Reasons for Processes Termination
23, Mar 20
Why does DNS use UDP and not TCP?
11, Jul 15
Why is YouTube using TCP but not UDP?
10, Sep 21
Why does Netflix use TCP but not UDP for streaming video?
10, Sep 21
This is exactly why we still use the OSI model when we have TCP/IP Model
01, Jun 21
Port Forwarding on Router and Why do we need It
15, Jan 21
Basic concept of TCP-Vegas
31, Dec 20
Top 50 TCP/IP interview questions and answers
07, Sep 21
TCP/IP Model
04, Oct 17
TCP 3-Way Handshake Process
05, Oct 17
TCP Congestion Control
31, Oct 17
TCP Server-Client implementation in C
12, Sep 18
TCP flags
31, May 18
Differences between TCP and UDP
18, Jun 18
Services and Segment structure in TCP
20, Jul 18
TCP and UDP server using select
07, Sep 18
What is TCP Window Scaling?
01, Feb 22
Devices used in each layer of TCP/IP model
27, Feb 19
TCP and UDP in Transport Layer
22, Jul 19
TCP Client-Server Program to Check if a Given String is Palindrome
02, Aug 19
OSI, TCP/IP and Hybrid models
08, Aug 19
Article Contributed By :