Why New Developers Should Work in a Startup?

Is it worth it for developers to work in a startup?

This is not only a mere question but an unavoidable situation that comes in every developer’s life (or others as well) when he is about to start his professional career or at least once in his entire career span. If we particularly talk about the software development domain, you may find out various worthwhile reasons to make a choice in favor of a big corporation but when it comes to opting for a startup – it is generally observed that most individuals hesitate to take a step forward. 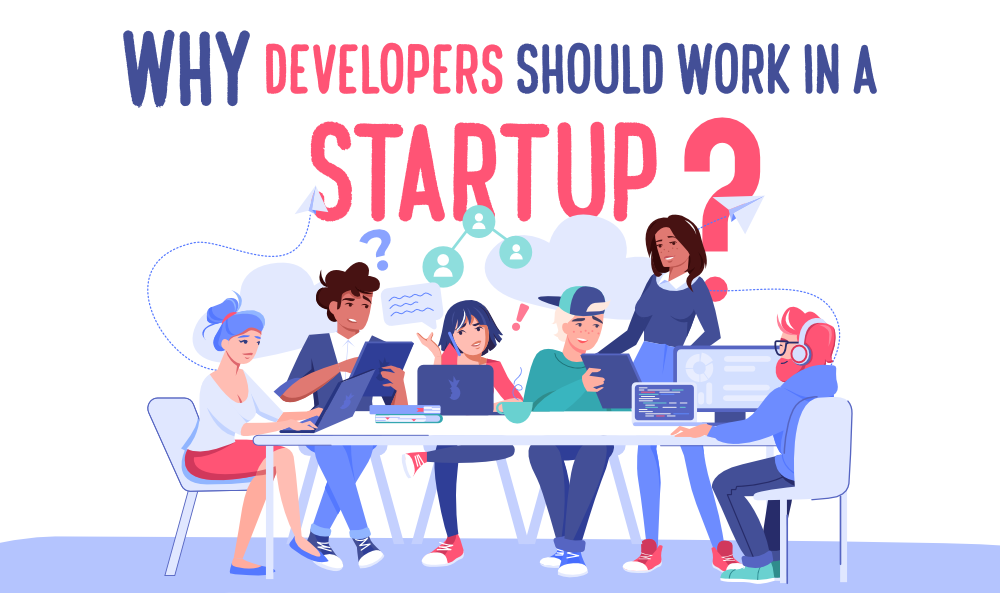 They often come up with various perceptions in their mind such as:

But have you ever think about the reason behind such beliefs and judgments of people towards working in startups? If yes, then you must have found out how these beliefs about startups are conventional and over-hyped. In reality, the majority of genuine startups are doing really well and offering numerous career opportunities & benefits to tech professionals. And with the same concern, here in this article, we’ll take a brief look at why developers should work in a startup. But before that, let’s have a comparative discussion, based on various crucial factors, between startups and big corporations.

Although the working environment of any organization, whether it be a startup or a big tech company, heavily depends on the people who are working there. Still, if you consider a general outlook, you will find out that big corporations or MNCs follow a more professional and rigid work culture in comparison with the startups. And undoubtedly, both the work environment have their own benefits such as the strict working environment of MNCs helps to keep the entire functioning of the organization better organized & efficient whereas startups favorable working environment often brings out the creativity of the employees.

This is one of those few aspects on which both the corporate entities – startups as well as big companies, are trying their best to provide the satisfactory salary packages along with other perks & benefits to the employees. However, startups often aren’t able to match the salaries of IT giants but the exposure you get at startups can compensate for the differences in salary & perks. Also, you get more financial opportunities in startups in the form of equity stakes and shares.

In the startups, you become more responsible & accountable compared to the big corporations where you are accountable for some defined responsibilities. However, such huge responsibility and accountability often come up with quite more workload in startups. Though you need to clear the myth that in a startup you’re mandatorily required to work 80+ hours a week. It’s true that there are times when you need to put in some extra hours but this is not a forever criterion of every startup and even this can happen at MNCs also.

Okay, here the dedication and performance of the employees play a pivotal role instead of the organization’s status (startup or MNC). If an individual is really having zeal and passion towards his job role that sooner or later he will definitely land up at a better position in his career. In addition, you have some great chances to climb the ladder of career growth in a startup by coming up with some extraordinary performances. Though, as startups are quite volatile so you may face delays or gaps also in your career growth if the organization doesn’t perform well in business terms.

One of the much-discussed factors!! Undoubtedly, job security is quite better in MNCs in comparison with startups. Reports say that most of the startups often fail within the first 2-3 years of their advent – now, you can determine the job security level of working at startups. But if you see it from another edge, you’ll find that in startups you get more chances to face the challenges and bring out your best to secure your job.

As of now, we’ve discussed all the crucial parameters for both – startups and big tech corporations. Now, it’s time to take a look at the primary concern that why it is worth it for developers to join a startup and what benefits they really can get by working in a startup:

By working in a startup, you can get numerous worthwhile learning opportunities that you may not get while working in any other big tech corporation. Being a developer, you get to work on multiple tech stacks in startups in accordance with the projects whereas in MNCs you are generally working on a single project and defined technology stack. You may be hired as a Trainee Developer or Junior Developer at a startup, but like giant corporates, you’re not bounded with your official job title or specific job role at startups and get the chance to explore various crucial things as the situation demands.

In startups, generally, you collaborate and work directly with the key people of the organization and somehow become part of the entire functioning of the organization (from panning to management), irrespective of your job title. Apart from the core development domain, in startups, you work with other teams such as testing, designing, marketing, etc. in a more transparent way that helps you to acquire the knowledge of other domains as well. Also, you’re more likely to gain several incredible work experiences at startups in a lesser time. It indeed helps you to get personal recognition and to make an overall professional and personality development of yours for achieving your future career goals.

The best and worst thing about working in startups is the uncertainties that come along with it. Though if we consider the positive outlook of it, if a startup grows constructively then your chances of career growth also become high. There are many examples of developers who reached managerial positions in a startup within a short time-span. Also, if you join an early-stage startup then you can even reach the positions of CTO, VP, or others efficiently. And yes, as you get enough business exposure while working in a startup – you can also work on developing or launching something of your own to grow your career.

After going through the above-mentioned points, most probably it would be clear to you that why working in a startup is a considerable option for all the developers. Though, as mentioned above, that working in startups come up with several uncertainties – hence you need to be a bit aware and do some research practices before joining any startup. Some of these practices are mentioned below:

If you keep these points in your mind while opting for a job in a startup, chances are more that you’ll not face any major difficulty in your career progression. Although being a developer, either your work for a startup or an MNC, they both have their set of both advantages and disadvantages. But if you want to get much exposure and love to face challenges then you should work in a startup at least once in your career.

And yes, you need to remember that every big tech company was once a startup – so, don’t be afraid of such temporary situations such as job security, etc., and give your best to achieve your career goals!!