Improve Article
Why floating-point values do not represent exact value

The floating-point numbers serve as rough approximations of mathematical real numbers. They do not represent the exact value. For this reason, we compare the arithmetic results of float variables with a minimum tolerance value.
Example:

Explanation:
The expected output is 0.09 as output. But, the output is not 0.09. To understand this, you first have to know how a computer works with float values. When a float variable is initialized, the computer treats it as an exponential value and allocates 4 bytes(32 bits) memory where the mantissa part occupies 24 bits, the exponent part occupies 7 bits, and the remaining 1 bit is used to denote sign.
For type double, the computer does the same but allocates larger memory compared to the float type. In the decimal system, every position from(left to right) in the fractional part is one-tenth of the position to its left. If we move from right to left then every position is 10 times the position to its right.
In a binary system, the factor is two as shown in the table: 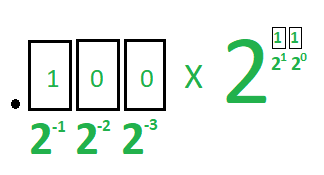 To simplify things, let us think of a mythical type named small float(see the above image) which consists of only 5 bits – very small compared to float and double. The first three bits of the type small float will represent mantissa, the last 2 bits will represent the exponent part. For the sake of simplicity, we do not think about the sign. So the mantissa part can have only 8 possible values and the exponent part can only have 4 possible values. See the tables below:

From the two tables, we can easily say that a small float can contain only 32 numbers and the range of the mythical type is 0 to 7. The range is not equally dense. If you see the following image carefully you will see most values lie between 0 and 1. The more you move from right to left the more sparse the numbers will be.

The small float can not represent 1.3, 2.4, 5.6, etc. In that case, small float approximates them. It can not represent numbers bigger than 7. Besides many combinations represent the same value. For example: 00000, 00001, 00010, 00011 represent the same decimal value i.e., (0.000). Twelve of the 32 combinations are redundant.
If we increase the number of bits allocated for small float, the denser portion will increase. As float values reserve 32 bits, float value can represent more numbers compared to small float. But some issues can be observed with float values and double values. There is no path to overcome this. Computers with infinite memory and fast preprocessor can only compute exact float or double values which is a fantasy for us.

My Personal Notes arrow_drop_up
Previous
Count of pairs having each element equal to index of the other from an Array
Next
Count of Binary Strings possible as per given conditions
Recommended Articles
Page :
Represent Tree using graphics in C/C++
18, Aug 20
How to swap Keys with Values of a Map in C++?
26, Aug 19
How to generate a vector with random values in C++?
23, Nov 20
How to delete a range of values from the Set using Iterator
03, Jan 19
How to return multiple values from a function in C or C++?
19, Sep 18
How to Enable or Disable SELinux Boolean Values?
10, Mar 21
Count the number of words having sum of ASCII values less than and greater than k
19, Nov 18
Efficient ways to compare a variable with multiple values
14, Oct 20
Program to find the product of ASCII values of characters in a string
11, Oct 18
Queries for elements having values within the range A to B in the given index range using Segment Tree
27, Apr 20
How to Set Up Processing on Windows?
18, Jun 21
How to Transfer Firebase Data From One Project to Another?
18, Jun 21
Article Contributed By :