Who Will Win The Quantum Supremacy Debate: Google or IBM? 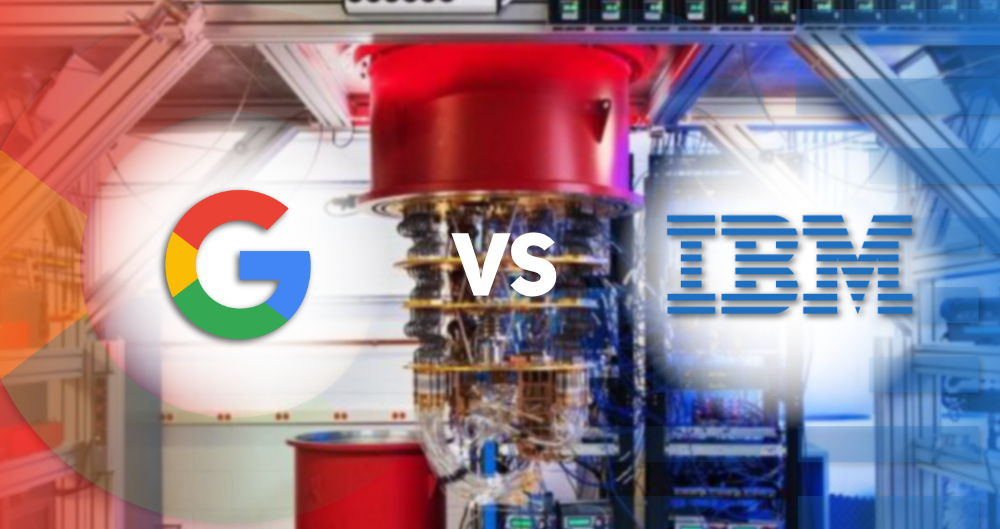 To understand this, first, you need to understand What is Quantum Computing? It is a computing technology based on the laws of Quantum Physics, which deals with the behavior of energy and matter at the quantum level (That’s the atomic level!). While normal Classical Computers process all the data using just a bit with two possible states 0 and 1, Quantum Computers use the unit qubits (quantum bits) instead of bits. Now, in Classical Computing, a bit has to be in a single state, either 0 or 1. But in Quantum Computing a qubit can be in both states (0 and 1) simultaneously, a property that is called Superposition.
Only when the qubit is actually measured, it has to decide whether it is 0 or 1. This can be understood as a flipped coin, that can heads and tails simultaneously. Only when it lands on your hand, then it is clearly heads or tails. Using these qubits, a fully functional Quantum Computer in the future could perform multiple calculations simultaneously which would increase its speed a million times more than even the most powerful classical supercomputers today!

Now that you have understood the basics of Quantum Computing, let’s understand what is Quantum Supremacy and why it’s so important in this field.

But that was not the end of this Quantum Computing war! In fact, this war has continued into 2019, with Google and IBM fighting it out on the issue of Quantum Supremacy. Let’s see what the current problem is!!!

On 23rd October 2019, Google officially claimed in the Nature Journal and Google Blog that their latest quantum processor chip Sycamore had executed a random number generation problem in 200 seconds which would take the world’s fastest supercomputer, which is Summit from IBM, approximately 10, 000 years.

While there is no practical significance of this experiment, technology experts still claim that it is a significant milestone as it proves that Quantum Supremacy can be achieved and Quantum Computers could have huge applications in the future. Sundar Pichai, the CEO of Google, compared this accomplishment to the 12-second first flight by the Wright brothers which was not practically useful but still proved that a plane could fly.

On 21st October 2019, IBM refuted Google’s claim on their Research Blog before it had even been officially made!!! This was probably done in response to a draft paper of Google’s Quantum Supremacy claim that was posted to a NASA server in September 2019 and then quickly removed. At that time, Google had refused to comment on the paper until it was officially published.

IBM stated that Google’s conclusion was completely wrong by saying that a classical computer like Summit could perform the random number generation problem in 2.5 days rather than the 10, 000 years suggested by Google. And that’s a huge difference!!! IBM also claimed that 2.5 days was a worst-case estimate and various performance enhancements could reduce the time even further. So, according to IBM, while Google’s experiment showed the progress achieved in Quantum Computing, Quantum Supremacy has still not been achieved as a classical computer is still able to do things that a quantum computer can and in less than a human lifetime (In fact a weekend!)

This argument between Google and IBM didn’t just stop here. In a press call, two of the researchers involved in Google’s Quantum Supremacy project hit back on IBM. They said that their data was absolutely correct and urged people to actually verify the random number generation problem on Summit to confirm whether it could be performed in 2.5 days.
They also stated that even if they were wrong and it only took 2.5 days on Summit, instead of 10,000 years, it was still quite slower than the 200 seconds achieved by Sycamore. This would mean that Google is still by far in the lead for Quantum Supremacy and Quantum Computers would eventually vastly outperform Classical Computers.
So basically, in current times Google is making claims of Quantum Supremacy while IBM is refuting these claims. There is no clear consensus on whether Quantum Supremacy has been achieved and various tech companies like Google, IBM, D-Wave Systems, Alibaba, etc. are in the race to be the first!!!