Which Linux File System Should You Use?

A file system is one of those implementations in an operating system that everyone uses but most are not aware of how it works.

Consider the older days when offices would keep records and files inside folders, bundle them into stacks, and put them on their respective shelves to where they belong. You could group the folders based on their registered dates or group them based on which area they refer to. So many ways to keep your files, yet each of them served a purpose, which was to ease our work by being kept in a structured manner and being found easily.

File systems are defined based on where they are used. There are file systems defined for operating systems, networks, databases, and other special-purpose file systems. When talking about an OS, a file system may be defined as a hard disk, flash memory, RAM, or optical discs.

In this article, we will be focussing on the file system for hard disks on a Linux OS and discuss which type of file system is suitable. Before that, let’s get ourselves familiar with the various characteristics associated with a file system.

The architecture of a File System:

A file system mainly consists of 3 layers. From top to bottom: 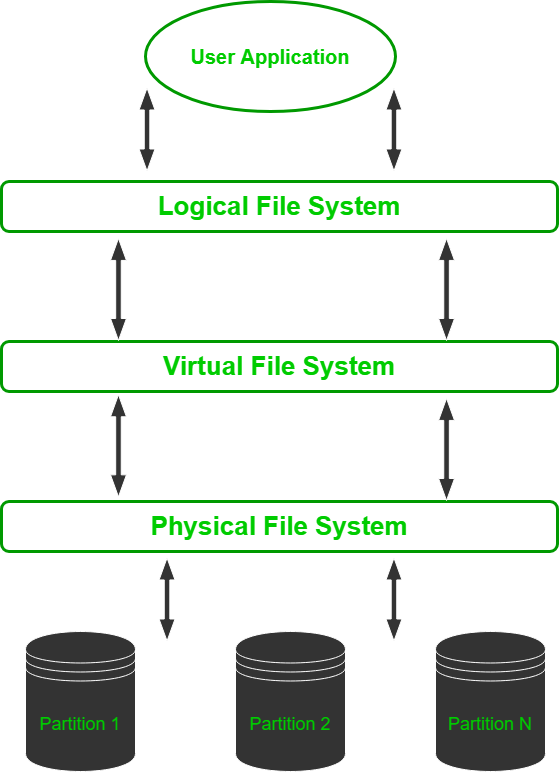 Characteristics of a File System

Journaling file systems keep a log called the journal, that keeps a track of the changes made to a file but not yet permanently committed to the disk so that in case of a system failure the changes lost can be brought back.

Versioning file systems store previously saved versions of a file, i.e. the copies of a file is stored based on previous commits to the disk in a minutely or hourly manner to create a backup.

The index node is the representation of any file or directory based on the parameters – size, permission, ownership, and location of the file and directory.

Now, we come to part where we discuss the various implementations of the file system in Linux for disk storage devices.

Note: Cluster and distributed file systems will not be included for simplicity.

The second ext was developed in 1993. It is a non-journaling file system that is preferred to be used with flash drives and SSDs. It solved the problems of separate timestamp for access, inode modification and data modification. Due to not being journaled, it is slow to load at boot time.

Also developed in 1993, this file system was less powerful and functional than ext2 and is no longer in use anywhere.

The third ext developed in 1999 is a journaling file system. It is reliable and unlike ext2, it prevents long delays at system boot if the file system is in an inconsistent state after an unclean shutdown. Other factors that make it better and different than ext2 is online file system growth and HTree indexing for large directories.

First created by IBM in 1990, the original JFS was taken to open source to be implemented for Linux in 1999. JFS performs well under different kinds of load, but is not commonly used anymore due to releasing of ext4 in 2006 which gives better performance.

It is a journaling file system developed in 2001. Despite its earlier issues, it has tail packing as a scheme to reduce internal fragmentation. It uses a B+ Tree that gave less than linear time in directory lookups and updates. It was the default file system in SUSE Linux till version 6.4, until switching to ext3 in 2006 for version 10.2.

XFS is a 64-bit journaling file system and was ported to Linux in 2001. It now acts as the default file system for many Linux distributions. It provides features like snapshots, online defragmentation, sparse files, variable block sizes, and excellent capacity. It also excels at parallel I/O operations.

Developed in 2002, this file system is read-only and is used only with embedded systems where low overhead is needed.

It is an incremental model to ReiserFS. It was developed in 2004. However, it is not widely adapted or supported on many Linux distributions.

The fourth ext developed in 2006, is a journaling file system. It has backward compatibility with ext3 and ext2 and it provides several other features, some of which are persistent pre-allocation, unlimited number of subdirectories, metadata checksumming and large file size. ext4 is the default file system for many Linux distributions and also has compatibility with Windows and Macintosh.

It was developed in 2007. It provides many features such as snapshotting, drive pooling, data scrubbing, self-healing and online defragmentation. It is the default file system for Fedora Workstation.

This is a copy-on-write file system that was first announced in 2015 with the goal of performing better than btrfs and ext4. Its features include full filesystem encryption, native compression, snapshots, and 64-bit check summing.

Others: Linux also has support for file systems of operating systems such as NTFS and exFAT, but these do no support standard Unix permission settings. They are mostly used for interoperability with other operating systems.

Below is a table, listing out the criteria on which filesystems can be compared:

Please note that there are more criteria than the ones listed in the table. This table is supposed to give you an idea of how file systems have evolved.

We see that XFS, ext4 and btrfs perform the best among all the other file systems. In fact, btrfs looks as if it’s almost the best. Despite that, the ext family of file systems has been the default for most Linux distributions for a long time. So what is it that made the developers choose ext4 as the default rather than btrfs or XFS? Since ext4 is so important for this discussion, lets describe it a bit more.

There are still some features in the process of developing like metadata checksumming, first-class quota supports, and large allocation blocks.

However, ext4 has some limitations. Ext4 does not guarantee the integrity of your data, if the data is corrupted while already on disk then it has no way of detecting or repairing such corruption. The ext4 file system cannot do secure deletion of file, which is supposed to cause overwriting of files upon deletion. It results in sensitive data ending up in the file-system journal.

XFS performs highly well for large filesystems and high degrees of concurrency. So XFS is stable, yet there’s not a solid borderline that would make you choose it over ext4 since both work about the same. Unless, you want a file system that directly solves a problem of ext4 like having capacity > 50TiB.

Btrfs on the other hand, despite offering features like multiple device management, per-block checksumming, asynchronous replication and inline compression, it does not perform the best in many common use cases as compared to ext4 and XFS. Several of its features can be buggy and result in reduced performance and data loss.

ext4 is used as a default file system for many Linux distros and unless you want to practice your hands on other types of filesystems, ext4 should be your first choice. Other file systems are adopted where they perform better. For example, XFS is the default for Red Hat Enterprise 7 and is still used by agencies like NASA and the U.S Department of Energy, and btrfs is used as a single-disk filesystem in Synology’s storage appliances.

Previous
Gobuster - Penetration Testing Tools in Kali Tools
Next
How to Use Regular Expressions (RegEx) on Linux
Related Articles
1. 7 Reasons Why Programmers Should Use Linux
2. Different Ways to Check Which Shell You are Using on Linux
3. Why You Should Opt Out From Ubuntu?
4. 50 Common Ports You Should Know
5. How to Use Gzip and Keep Original File in Linux?
6. proc file system in Linux
7. SMWYG (Show-Me-What-You-Got) Tool in Kali Linux
8. How to Install and Use Htop on Linux?
9. How to use aplay and spd-say command in Linux?
10. How to Install and Use Hydra in Linux?
Article Contributed By :