What to Use for Background Processing in Android?

By default, application code runs within the main thread. Every statement is therefore executed in sequence. If you perform an extended-lasting operation, the appliance blocks until the corresponding operation has finished. To provide an honest user experience all potentially slow running operations in an Android application should run asynchronously. this will be archived via concurrency constructs of the Java language or of the Android framework. Potentially slow operations are for instance: network, file, and database access, and sophisticated calculations and tasks like them need background processing, let’s dive a little deeper and look at that in detail!

Android modifies the interface and handles input events from one single thread, called the most thread. Android collects all events during this thread during a queue and processes this queue with an instance of the Looper class. The Android Operating System uses the Thread class to perform asynchronous tasks like the ones mentioned above the header image. The java.util.concurrent is also provided by it to perform certain tasks, something which we call background. For instance, by using the ThreadPools and Executor classes.

If you would like to update the interface from a replacement Thread, you would like to synchronize with the most thread. due to these restrictions, Android developers typically use Android-specific code constructs.

The RxJava open-source framework allows specifying an observer of an observable stream of knowledge. Once the events happen and are reported finished, the observer is named by the framework. you’ll configure during which thread the observer and observable run.

What Exactly is Background Work?

An app is taken into account to be running within the background as long as each of the subsequent conditions is satisfied:

A simple glyph to understand this process could be taken from the below Image: 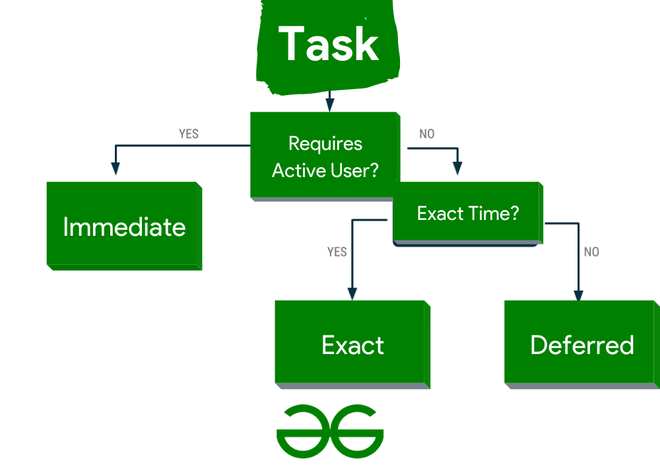 Background tasks fall under one among the subsequent main categories:

To categorize a task, answer the subsequent questions, and traverse the corresponding decision tree in (fig 1:)

Most tasks don’t get to be run at a particular time. Tasks generally leave slight variations in once they run that are supported conditions like network availability and remaining battery.

These tasks could be used for background processing in Android, Let’s learn more about them in detail:

For tasks that ought to be executed immediately and wish continued processing, albeit the user puts the appliance in the background or the device restarts, we recommend using WorkManager and its support for long-running tasks. In specific cases, like with media playback or active navigation, you would possibly want to use foreground services directly.

Every task that’s indirectly connected to user interaction and may run at any time within the future is often deferred. The recommended solution for deferred tasks is WorkManager. The WorkManager makes it quite efficient and easy to schedule the asynchronous and deferrable tasks, even the tasks which need to resume when the phone restarts!

A task that must be executed at a particular point in time and they can use AlarmManager.

Initialize the thread with a runnable and then proceed to perform any heavy operation. By default the views have a handler, so you’ll do View.post(). The Handler is that the means of communication between the heavy task running on the created thread and therefore the UI Thread.

Useful when it’s necessary to run tasks within the background that don’t affect the UI. they’re completely decoupled from view, ie they’re not suffering from the life cycle of the Activity.

GeekTip: It must be declared within the AndroidManifest.xml a bit like the other Service. It can then be pushed by simply sending an intent (it can even include any parameter!)

Run instructions within the background and synchronize again with the most Thread. Useful for brief background operations. Read More here.

Each AsyncTask instance is often executed only/just one time.

With this, we conclude our article on Background Processing, as you could see there are certain issues and problems with the methods, so choosing the right one (suiting your need) should be an easy task!