If you’ve ever visited a railway station, you’ve probably seen the station’s coolies. The coolie places the baggage on the ground and grabs it to protect it from toppling over. The coolie then pulls up and lowers the baggage till it reaches the ground. What exactly is going on here? We can see that some work has been done in this area. So, what exactly is work? Let’s have a look at the information below.

Work is the force that causes an item to move or be displaced. In the case of a constant force, it is the scalar product of the force exerted on an object and the displacement generated by that force. 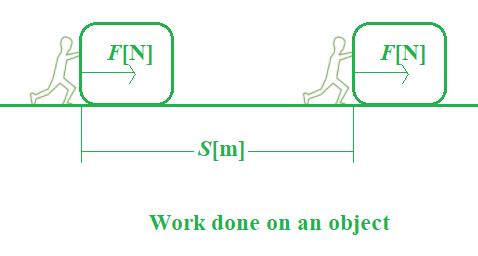 Despite the fact that both force and displacement are vector variables, it has no direction owing to the nature of a scalar product. When we apply a force that produces a movement in an item across a distance, we are said to be doing work. Work occurs only when an item is raised or moved, according to physics definition. It is not, however, about an item in a fixed location.

Work is expressed in a variety of ways depending on the situation. For example, the work done while compressing gas at a constant temperature is the product of pressure times volume change. It transmits energy to the body, thus the amount of work done on the body is proportional to the increase in the body’s energy. If the applied force is in opposition to the object’s motion, the work done is deemed negative, implying that energy is being removed from the item.

“Despite Working Hard, No Work is Completed”

Consider the following scenario: a waiter is carrying a tray high over his head with one arm while strolling at a steady speed across a room, despite the fact that you might believe he’s working hard.

However, he is not working in the scientific sense. The waiter is pushing the tray over his head with vigour, and the tray is going across the room as he goes. However, the waiter’s lifting of the tray has no effect on the tray’s movement. To create a displacement, there must be a force in the direction of the displacement.

When a force acts on an item over a long distance, the thing undergoes work. Physically, the work done on an item is the change in kinetic energy that the object goes through.

When we talk about work, we focus on the impact that the system has on its surroundings. As a result, we consider work to be good when the system makes an attempt to improve the environment (i.e., energy leaves the system). If work is done on the system, the work is negative (i.e., energy added to the system).

Scientifically, the places where scientific activity is done is as follows:

Consider a block that is resting on a smooth horizontal surface. This block is subjected to a constant force F. The goal of this force is to propel the body a particular distance in a straight line in the force’s direction. The product of the magnitude of applied force and the distance travelled by the body equals the total work done by this force.

The formula for scientifically completed work will be as follows:

Dimension formula and Units of Work:

Let’s look at the elements that influence how much work a force can accomplish on an object.

When a force moves an item in a positive direction, the work done is considered positive. The motion of a ball falling towards the earth, with the displacement of the ball in the direction of gravity, is an example of this sort of labour.

When force and displacement are in opposite directions, it is considered that the work is negative. For example, if a ball is thrown upwards, the displacement will be upwards; nevertheless, the force due to gravity will be downwards.

The total work done by the force on the item is 0 if the direction of the force and the displacement are perpendicular to each other. When we push forcefully against a wall, for example, the force we are exerting on the wall is ineffective since the wall’s displacement equals d = 0.

Question 1: The rope pulls the box along the floor, creating a 30° angle with the horizontal surface. The box is dragged for 20 metres, with a force of 90 N applied by the rope. Where can I find the force’s final work?

The angle between force and displacement, θ = 30°

So, total work done by the force is,

Question 2: With Force 10 N engaged at an angle of 60° from the horizontal, a girl thrusts a toy car from the stationary state on the horizontal floor. The toy car weighs 4 kg. In 10 seconds, can you find the girl’s work?

Initially, we can resolve the force into two components such as horizontal and vertical component;

Now we need to figure out how much work we’ve done and how far we’ve travelled.

The horizontal force will now be the sole source of acceleration for that toy cart.

We can obtain displacement from the formula:

So, the work done will be:

Question 3: Is the effort done by gravity when a body falls freely under gravity positive or negative?

Question 4: Is the work done by friction when a body slides against a rough surface positive or negative?

When a force acting on a body has a component in the opposite direction of displacement, the force’s work is negative. As a result, the frictional force on the body does negative work.

Question 5: Superman uses force to stop a vehicle from rolling downhill. Is this an example of work that has been completed?

No. There is no work done since there is no displacement. He’s only holding the automobile up to keep it from tumbling down the slope.