What is the meaning of let-* in Angular 2 Templates ?

The let keyword in Angular declares a template input variable that is referenced within the template. In Angular, the micro syntax is used to configure a directive in a compact and friendly string. It is a capability given in angular to embed the variables in the template directly by translating that string into attributes on the <ng-template> tag.

Example 1: With this example, there is a very simple implementation of the creation of an embedded variable using the ng-template tag. Here variables are formed, for which the value is assigned as This is ‘GeeksForGeeks’. The code below is to be written in the template file of the component, this is an angular 5 update.

Output: In this example, the template reference is created by the #TheGeekTemplate, which is given in the next ng-template tag under the [ngTemplateOutletContext] property. The variable GFG is the variable defined by the let keyword which has a string acting as the export variable and to this variable a new value is assigned within the template by [ngTemplateOutletContext] property. For the variable Geek, the value is not provided so it takes the implicated value given to the $implicit i.e. default value.

Example 2: This example is a demo for using let in ngFor directive. Here a variable items will be linked to the component class and directly be used in the variable named elt, made by let-elt. 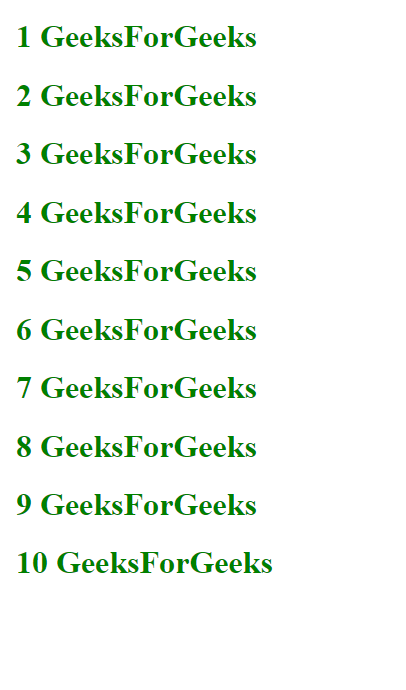 Example 3: Here two variables are formed, for one the value is assigned and for the second variable, the values will be linked to an export variable. The code below is to be written in the template file of the component.