This protocol is used to communicate data between two points in a server. The client doesn’t necessarily need prior knowledge the server identities capable of serving its request. Medium Access Control (MAC) addresses requires individual configuration on the servers done by an administrator. RARP limits to the serving of IP addresses only.
When a replacement machine is set up, the machine may or might not have an attached disk that may permanently store the IP Address so the RARP client program requests IP Address from the RARP server on the router. The RARP server will return the IP address to the machine under the belief that an entry has been setup within the router table. 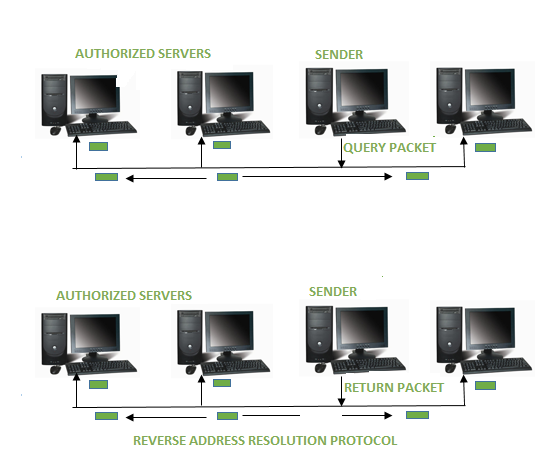 History of RARP :
RARP was proposed in 1984 by the university Network group. This protocol provided the IP Address to the workstation. These diskless workstations were also the platform for the primary workstations from Sun Microsystems.

Working of RARP :
The RARP is on the Network Access Layer and is employed to send data between two points in a very network.
Each network participant has two unique addresses:- IP address (a logical address) and MAC address (the physical address).

The IP address gets assigned by software and after that the MAC address is constructed into the hardware.
The RARP server that responds to RARP requests, can even be any normal computer within the network. However, it must hold the data of all the MAC addresses with their assigned IP addresses. If a RARP request is received by the network, only these RARP servers can reply to it. The info packet needs to be sent on very cheap layers of the network. This implies that the packet is transferred to all the participants at the identical time.

The client broadcasts a RARP request with an Ethernet broadcast address and with its own physical address. The server responds by informing the client its IP address.

How is RARP different from ARP ?

Uses of RARP :
RARP is used to convert the Ethernet address to an IP address.
It is available for the LAN technologies like FDDI, token ring LANs, etc.

Disadvantages of RARP :
The Reverse Address Resolution Protocol had few disadvantages which eventually led to its replacement by BOOTP and DHCP. Some of the disadvantages are listed below:

RARP has now become an obsolete protocol since it operates at low level. Due to this, it requires direct address to the network which makes it difficult to build a server.