What is Parallel Processing ?

For the purpose of increasing the computational speed of computer system, the term ‘parallel processing‘ employed to give simultaneous data-processing operations is used to represent a large class. In addition, a parallel processing system is capable of concurrent data processing to achieve faster execution times.

As an example, arithmetic, shift and logic operations can be divided into three units and operations are transformed into a teach unit under the supervision of a control unit.

One possible method of dividing the execution unit into eight functional units operating in parallel is shown in figure. Depending on the operation specified by the instruction, operands in the registers are transferred to one of the units, associated with the operands. In each functional unit, the operation performed is denoted in each block of the diagram. The arithmetic operations with integer numbers are performed by the adder and integer multiplier.

Floating-point operations can be divided into three circuits operating in parallel. Logic, shift, and increment operations are performed concurrently on different data. All units are independent of each other, therefore one number is shifted while another number is being incremented. Generally, a multi-functional organization is associated with a complex control unit to coordinate all the activities between the several components. 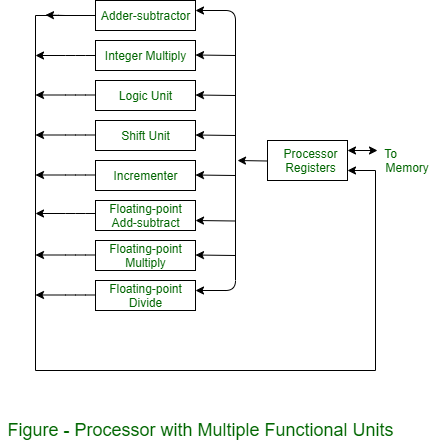 The main advantage of parallel processing is that it provides better utilization of system resources by increasing resource multiplicity which overall system throughput.