What is P2P(Peer-to-peer process) ?

A peer to peer network is a simple network of computers. It first came into existence in the late 1970s. Here each computer acts as a node for file sharing within the formed network. Here each node acts as a server and thus there is no central server to the network. This allows the sharing of a huge amount of data. The tasks are equally divided amongst the nodes. Each node connected in the network shares an equal workload. For the network to stop working, all the nodes need to individually stop working. This is because each node works independently. 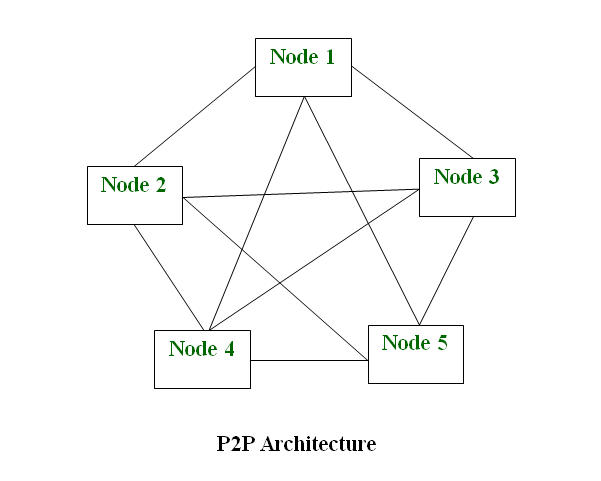 History of P2P networks :
Before the development of P2P, USENET came into existence in 1979. The network enabled the users to read and post messages. Unlike the forums we use today, it did not have a central server. It used to copy the new messages to all the servers of the node. After this, Napster was developed which was a file-sharing P2P software. It could be used to share audio files as well. This software was shut down due to the illegal sharing of files. But the concept of network sharing i.e P2P became popular.

Features of P2P network :
These networks do not involve a large number of nodes, usually less than 12. All the computers in the network store their own data but this data is accessible by the group. Unlike client-server networks, P2P uses resources and also provides them. This results in additional resources if the number of nodes increases.It requires specialized software. It allows resource sharing among the network. Since the nodes act as servers also, there is a constant threat of attack. Almost all the OS today support P2P networks.

How to use a P2P network efficiently :
Firstly secure your network via privacy solutions. Design a strategy that suits the underlying architecture in order to manage applications and underlying data. Keep a check on the cyber security threats which might prevail in the network. Invest in good quality software that can sustain attacks and prevent the network from being exploited. Update your software regularly.

My Personal Notes arrow_drop_up
Previous
Difference between TCP and RTP
Next
Representation of Negative Binary Numbers
Recommended Articles
Page :
TCP 3-Way Handshake Process
05, Oct 17
Networks and Process of Network Communications
13, Jul 20
How does a switch learn PC MAC Address before the PING process?
01, Jun 21
Encoding and Decoding in Communication Process
13, Mar 22
Process Migration in Distributed System
11, Mar 22
The Stuxnet Attack
17, May 22
Difference between CDMA and GPRS
16, May 22
What is the difference between ISP and OSP?
15, May 22
Bluetooth vs Bluetooth Low Energy
15, May 22
Static vs Dynamic Load Balancing
13, May 22
Wireless Power Transmission
12, May 22
Load Balancing Approach in Distributed System
12, May 22
Article Contributed By :