What is Network Segmentation?

Let’s understand with an example, GeekforGeeks organization has different teams like sales and finance. Both teams have their network, but they cannot access the files on one another’s networks. In case the sales team wishes to access the files of the finance team it will have to pass through a switch, router, and then a firewall. The diagram below is a clear representation of the same. 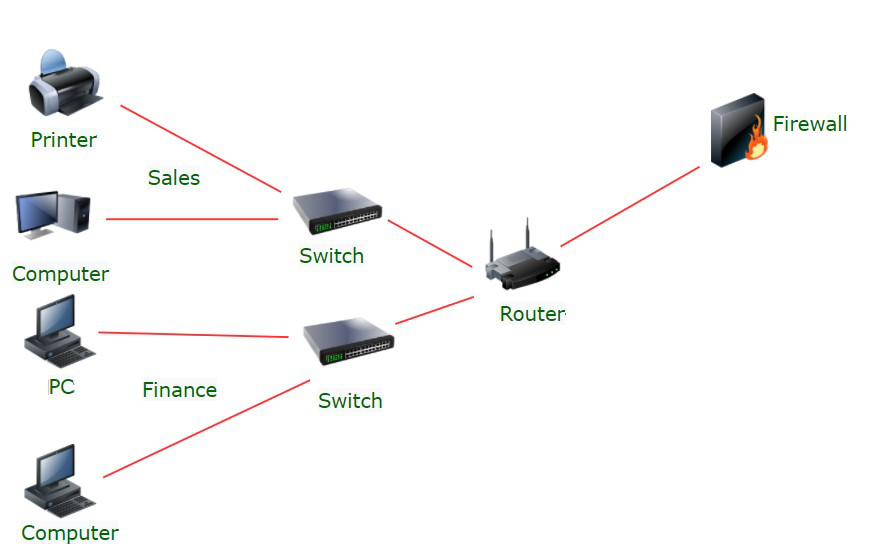 Network Segmentation in an organization

Thus, in organizations segmentation keeps teams from sharing information with each other.

What is network segmentation used for?
Network segmentation has several benefits for organizations. It does not have a single purpose, but primarily it is used to organize networks. Segmentation also allows for more efficient use of bandwidth by reducing the size of broadcast domains and getting rid of unnecessary traffic on the network. Another benefit of having a segmented network is that it enhances security by reducing an organization’s attack surface by not keeping all computers in the same network space. When you separate a network, all outbound and inbound traffic have to go through a layer-3 device, a router, and a firewall if there is one. If one team wants to contact another team over a network, the traffic passes through the router and firewall. Thus, segmentation gives a little more control to the organization over the traffic because the firewall can do things like denying unnecessary traffic.

The prime benefits of segmentation can therefore be summarised as:

Types of Network Segmentation :
To segment a network two techniques can be used:

To physically segment a network, one has to plug different groups of devices into separate switches. On the other hand, virtual segmentation (also known as logical segmentation) means using a Virtual Local Area Network (VLAN). VLAN devices must connect to the same layer-2 device, often the same switch, but are on separate lands because they are separated virtually. Using a VLAN for network segmentation is a popular segmentation technique as it is easier to implement.

Network segmentation can also depend on the types of devices involved in the network. Depending on the business requirements, organizations can also use a combination of more than one segmentation technique.