The magnetic flux across a surface is defined as the surface integral of the normal component of the magnetic field (B) travelling through that surface in electromagnetism, a branch of physics. It is indicated by the letters ϕ or ϕB. The Maxwell unit is the CGS unit, while the Weber unit is the SI unit of magnetic flux (Wb).

The number of magnetic field lines flowing through a closed surface is known as magnetic flux. It calculates the total magnetic field that travels across a specific surface area.

The region under consideration might be any size and can be oriented in any direction about the magnetic field direction. The Greek letter Phi or the Phi suffix B is often used to represent magnetic flux. The symbol for magnetic flux is ϕ or ϕB.

The magnetic flux formula is given as:

Faraday’s breakthrough came when he discovered a simple mathematical relationship to explain a series of electromagnetic induction tests he did. Faraday is largely regarded as the greatest experimental scientist of the nineteenth century, having made significant advances to science. Before we begin to appreciate his work, we must first comprehend the idea of magnetic flux, which is critical to electromagnetic induction.

The resultant flux is relatively low if the field lines meet the area at a glancing angle, that is:

where, θ is the angle between vectors A and B. 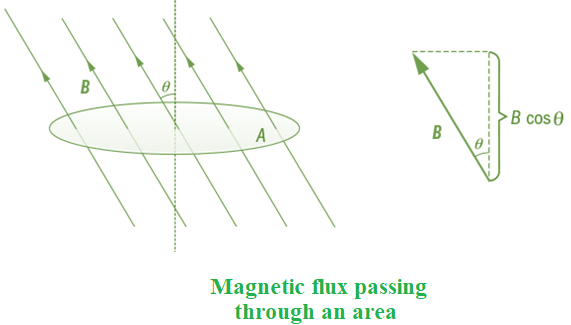 If the magnetic field is non-uniform, with various magnitudes and directions at different areas of the surface, the total magnetic flux across the surface may be calculated as the product of all such area elements and their respective magnetic fields.

The magnetic flux is clearly a scalar number, as shown by the equation above. Weber (Wb) or tesla meter squared is its SI unit (T m2).

The Weber (Wb) or tesla meter squared (T m2) unit of magnetic flux is named after German scientist Wilhelm Weber. A magnetometer may be used to measure the magnetic flux. Assume a magnetometer probe is moved over a 0.9 m2 region near a huge sheet of magnetic material and shows a constant reading of 10 mT. The magnetic flux through that area is then computed using the formula (10 × 10−3 T) (0.9 m2) = 0.0090 Wb. It would be essential to find the average measurement in the event of shifting magnetic field readings across a large region.

What is Magnetic Flux Density?

The force operating per unit current per unit length on a wire positioned at right angles to the magnetic field is described as magnetic flux density(B).

The formula for magnetic flux density is given as:

Question 1: In a magnetic field of strength 2 T, a coil with a cross-section of 2 × 10–2 m2 and 50 turns is positioned with its axis at a 30° angle to the field. Find the total flux associated with the field.

The formula of flux is given as:

Hence, the total flux associated with the field is 1.732 Wb.

Question 2: In a magnetic field, a coil conducts a current. There is a turning effect on the coil. What gadget takes advantage of this effect?

A coil of wire-free to revolve between two magnetic poles can be used to make a basic electric motor. The coil receives a force and moves when an electric current runs through it. As a result, it’s a d.c. motor.

Question 3: What is electromagnetic induction?

A moving rod in a uniform magnetic field would also imply moving electrons in a magnetic field, which would put force on them to travel in a certain direction through the rod, resulting in a potential difference between the ends.

According to Faraday’s law, the EMF generated by a change in magnetic flux is proportional to the flux change, time t, and a number of coil turns.

Question 5: Why is a coil’s displacement current generated by a change in magnetic flux created by another coil nearby?